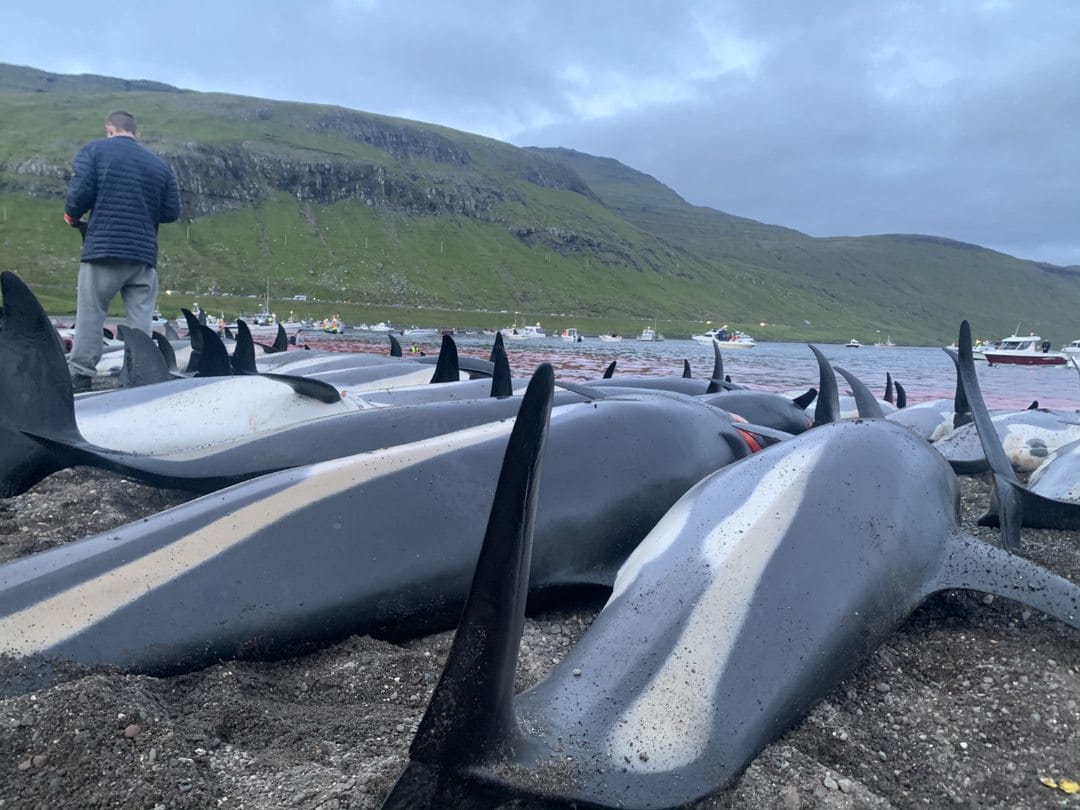 A long-awaited review by the Faroese government into the disturbing and cruel massacre of over 1400 Atlantic white-sided dolphins in 2021 has potentially made the situation worse.

The country’s Ministry of Fisheries has failed to ban the cruel hunts and, instead, proposed an annual catch limit of 500 dolphins on a provisional basis for 2022 and 2023. This number is not only higher than the total of Atlantic white-sided dolphins normally killed each year but a total that could be increased in future years.

Together with our friends at Avaaz, Only One and SeaLegacy, we presented 1.3 million signatures to the country's prime minister calling for this review. In an effort to stop future hunts, we also inputted to the review process itself following the incident in which a group of local people killed 1,423 of the dolphins at Skálafjørður on the Faroe Islands in early September 2021, resulting in an international outcry and criticism from within the country.

This was the largest hunt on the islands ever, and perpetrated by a small number of people. The result was a chaos that led to prolonged deaths for many of the dolphins who were herded into shore then killed with traditional whaling knives despite this practice no longer being used for killing pilot whales due to welfare concerns.

We gave our input the government of the Faroe Islands but they haven’t listened. They previously claimed that these hunts were well regulated but the awful event on September 12th last year, clearly shows this was not the case. We fear that not only will new regulations make no real difference but note that the deplorable act of dolphin slaughter has now been re-endorsed. There was a major opportunity for the Faroe Islanders to move beyond this cruelty and they have failed to take this opportunity in a meaningful way. We are gravely disappointed and deeply upset that this needless slaughter will continue.

We do not believe that the setting of any quota can be substantiated scientifically. There is significant lack of knowledge of these dolphins. There are likely to be several distinct populations within the North Atlantic, with the one targeted in the Faroes numbering around 14,000 individuals.

According to several recent polls, a majority of Faroese people (53% to 63%) think that the dolphin hunts should end. The main reasons being that the dolphin meat is not in demand and the hunts harm the country’s reputation, and hunting dolphins is not part of the local drive hunt traditional (grindadráp).

In the 21st century, no one in the Faroe Islands depends on the killing of whales and dolphins for their own survival, but we do rely on them for the survival of our shared planet - a healthy planet needs a healthy ocean and for that, we need whales and dolphins to thrive. So for their sake and ours, this slaughter should stop immediately.

UK MPs are set to debate the hunting of dolphins and whales in the Faroe Islands later today.

Find out more about whale and dolphin hunts in the Faroe Islands.

Donate to help us end hunting