There are two types of whale; baleen and toothed. The key difference between them is the way they feed and what they have inside their mouth.

Baleen whales are generally huge; the largest is the biggest creature to have ever lived on Earth- the blue whale. Baleen whales are aptly nick-named the ‘great whales’ yet they survive on the teeniest (and most abundant) animals in the ocean; they are filter feeding specialists and target shoals of small fish or clouds of zooplankton and krill in the sea. Their baleen plates or ‘whale bones’ are made from a material similar to human fingernails and animal horns; they are strong, flexible and feathered at the edges, rather like bristles on a brush. Huge volumes of seawater are strained through the baleen plates which sieve and retain little sea creatures in huge quantities.

Right whales and bowheads are skimmers or grazers and gather food by swimming slowly, open-mouthed through dense patches of it. Humpbacks, blue whales and fin whales are gulpers; their throats are expandable and enable them to take enormous mouthfuls of seawater and sieve out their prey; gray whales are bottom feeders and sift prey from mouthfuls of mud on the seabed.

Most baleen whales are migratory and tend to follow the same basic migratory pattern. Some, such as humpbacks and gray whales make very long, seasonal migrations. Our understanding of why they do this is that they face a dilemma; there is much more whale food available in cold polar oceans but these environments are risky and challenging for vulnerable newborn whales who thrive in warmer seas. The baleen whale solution to this is to feed in cold water feeding areas for as long as possible in the summer months and then swim to warm, calm water nursery areas. Not all baleen whales migrate; Bryde's whale, the bowhead whale and sei whale are all non-migratory.

Baleen whales do not echolocate but they do make sounds to communicate with one another, display and attract mates, repel rivals and establish territories. Different baleen whales use a variety of sounds including singing, moans and short pulses.

Baleen whales are grouped into four families: rorqual; right; gray; and pygmy right whale. However, the exact number of species (currently 14) and their relationships to one another are still matters of hot debate as scientists are finding what they believe to be new species within species.

Rorqual is derived from the Norwegian word röyrkval which means "furrow whale". This is thought to refer to the long folds of skin in the lower jaw. 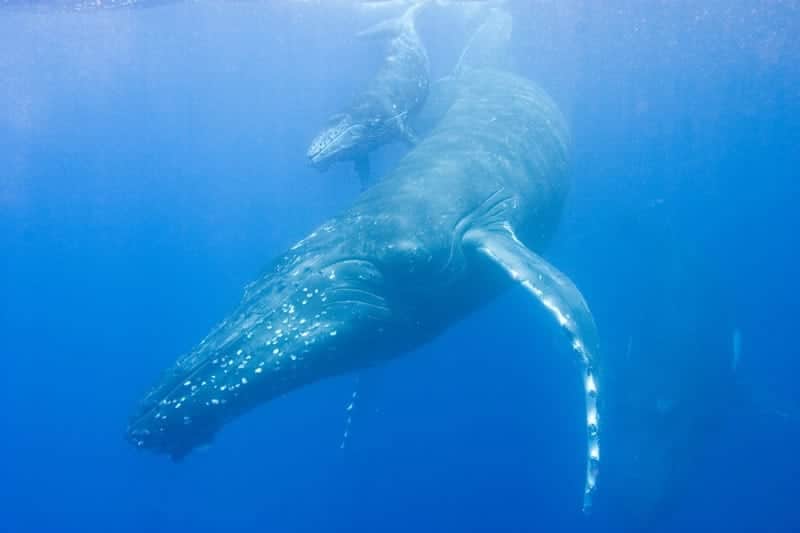 The right whale and bowhead whale family is made up of three right whale species and the bowhead whale. They are enormous, rotund, stocky whales who can grow up to 20m and weigh 90 tonnes (90,000kg). They have huge heads measuring up to a third of the total length and their backs are smooth with no dorsal fin or ridge. Right whales and bowhead whales are slow swimmers; they skim feed or graze using their impressively long baleen plates to filter food from seawater. These whales were intensively hunted during the commercial whaling years and are struggling to recover; in fact both the North Atlantic right whale and the North Pacific right whale are endangered and continue to decline in numbers. Subsistence whaling of bowhead whales is still practised by Alaskan and Greenlandic aboriginal subsistence whalers.

The gray whale family only has one member – the gray whale. Gray whales are the most coastal of all baleen whales as they live in shallow water where they feed on the seafloor. They swim on their sides, close to the seabed and suck muddy sediments into their mouth and sieve out their prey using short, course baleen plates in their mouths.

Gray whales grow up to 15.2m (50ft) long. Their skin is very mottled and this is caused by patches of whale lice and parasitic barnacles living on them. They have a bumpy dorsal ridge and no dorsal fin. Gray whales undertake the longest migrations by a mammal species.

The pygmy right whale family like the gray whale, has a single member! As the name suggests, this is a relatively small whale by baleen whale standards (up to 6.5m long and 3,400kg) and is the most mysterious one too. There is very little known about the pygmy right whale as they are rarely seen at sea. Pygmy right whales are found only in the southern hemisphere and their exact range is unknown.

The rorqual family is the biggest baleen whale family with eight members, including the blue, fin, humpback, Bryde’s, sei, and minke whales. Rorquals are sleek, slender, streamlined whales, with pointed heads and flippers. They are lunge-feeders and have deep ‘throat grooves’ extending from the mouth to their belly button. Throat grooves are long folds in the skin which expand when they feed. As the whale gulps huge quantities of seawater, the throat bulges like a giant balloon. Rorquals vary in size from the smallest minke whale 8.8m (29ft) long to the blue whale who can reach 33m (108ft) long.

Whales face numerous threats from whaling, collisions with shipping, entanglement in nets and pollution. With your help WDC is working to make the oceans a safer place for them to live.

Toothed whales are accomplished predators. They use a special sense called echolocation (biosonar) to hunt and to help them ‘see’ their underwater world. This is a very important skill as it allows them to hunt and navigate underwater where it is often too dark to see properly.

Toothed whales are very social and are always with others; they commonly live in groups known as pods. They are amongst the most intelligent creatures on Earth; they have large brains, show complex behaviour including the ability to teach others and learn from one another.

Almost 90% of all types of whale, dolphin and porpoise are toothed whales and most of them are small dolphins and porpoises; a notable exception is the largest of all toothed whales, the sperm whale who is an honorary ‘great whale’.

There are 76 toothed whale species altogether and they are grouped into ten families: the sperm whale; the dwarf and pygmy sperm whale; the beluga and narwhal; the beaked whales; the oceanic dolphins; the four river dolphins (each one is placed in a family of their own); and the porpoise family.

Some species of beaked whale have never been sighted alive. We only know of their existence from stranded whales.

The sperm whale is the only member of the sperm whale family. Sperm whales can grow to 20m long and weigh almost 60 tonnes; they have the biggest brains on Earth and their huge box-shaped heads are 40% of the body length. Most of the space inside their head is dedicated to the oil-filled spermaceti organ which serves to enhance their echolocation skills. Their skin is wrinkled and they have a narrow lower jaw, lined with teeth. They are found in deep water of all oceans and can dive to incredible depths of over 3000m; they hunt giant squid. The famous book, ‘Moby Dick’ tells the story of whalers hunting sperm whales.

The beaked whale family is the biggest of the large toothed whale families with 22 members - this is likely to increase as scientists learn more about these squid-eating, deep water, mysterious whales. For now, they are the least well-known of all whales; some species have never been seen alive and are known only from dead ones that wash ashore. For at least some of these whales living only in one part of the ocean, the lack of sightings might simply be because they are extremely rare.

The beluga whale and narwhal are both unique toothed whales living in cold, arctic waters; together they make up the ‘white whale’ family. Both lack dorsal fins, have bulbous heads and flexible necks. They are grey at birth and whiten as they grow older; adult belugas are a brilliant white and adult narwhals vary from almost white to mottled grey. Narwhals are famous for their unicorn-like tusk which is actually a very long tooth.