Long-finned pilots whales do indeed have very long flippers! However, the ‘pilot’ part of their name comes from an old theory that each pod is piloted by a single leader.

We now know this is not the case, but the name has stuck. Pilot whales are actually large dolphins; they are the second largest member of the oceanic dolphin family (second only to orcas in size).

Pilot whales are extraordinarily social; their strong bonds with one another motivate  them to stick together through thick and thin, even when that means putting themselves at risk.

Pilot whales have a very sociable and inquisitive nature.  They are long-lived and live together in multi-generational, tight-knit, stable pods. There are usually more females than males as their pods are built on units of mothers and their offspring. Baby pilots grow up within the safety of the pod they are born into and remain within the same pod for life. Older females or those who are not giving birth themselves, help mothers in the pod care for their babies.  Pilot whales are strongly bonded to each other and do everything together; resting, hunting, socialising, playing and travelling as a unified pod. The most important thing in their lives is each other and they are incredibly loyal. There can be anything from 10 to 20 all the way up to a hundred pilot whales living together in a pod. Huge multi-pod get-togethers of hundreds or even a thousand pilot whales give ample opportunity for males to mix and breed with females from other families.

Sometimes they will approach vessels moving at slow speeds and will often allow slow-moving whale-watch boats to approach them.

Pilot whales can dive to depths of over 600m for 10 to 16 minutes at a time to hunt. They mostly feed at night in deep water using echolocation to find prey.

What do long-finned pilot whales eat?

Mainly squids and octopus; these cephalopods are definitely their favoured food.  They do sometimes eat fish such as mackerel, hake, herring and cod. Their squid eating lifestyle is evident when looking inside their mouths as they have far fewer teeth than dolphins that prefer fish. Pilot whales ‘ram and suck’ squid into their mouths and so their mouths are adapted for sucking rather than grasping prey.

Where do long-finned pilot whales live?

Long-finned pilot whales live throughout the cold and temperate waters of the southern hemisphere and in the North Atlantic Ocean; they have a wide distribution around the globe. They prefer deep offshore environments but do occur in coastal waters in some areas. Long-finned pilot whales are generally nomadic, although some populations are resident all year round in the same location. Their movements are principally dictated by sources of food in the ocean – they move around searching for good supplies of squid.

The sociable nature of pilot whales extends to other whales and dolphins. They are often seen swimming with oceanic dolphins in mixed-species pods including common dolphins and  bottlenose dolphins, but also other species such as Atlantic white-sided dolphins and minke whales. 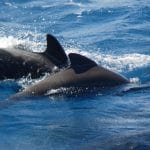 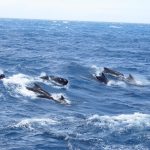 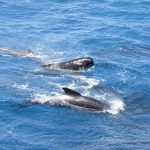 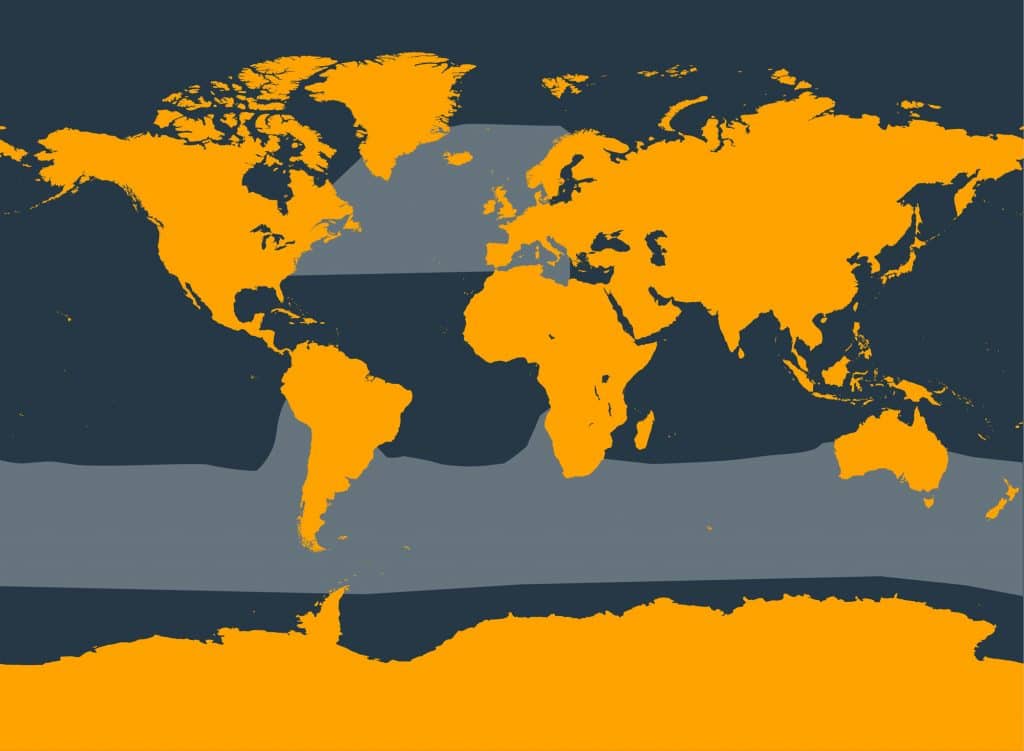 Sadly, perhaps the thing that pilot whales are most famous for is their tendency to mass strand on beaches. We simply do not know why large numbers of healthy whales strand together like this. In many cases the cause simply cannot be determined. We are sure that the strong bonds between them and their propensity to stick together and follow one another plays a big role in these stranding events, whatever the underlying reasons might be. Possible causes are navigation mistakes when following prey or travelling (perhaps due to irregularities in the magnetic field), or possible parasitic infections resulting in neurological disorders, or perhaps the whole pod simply sticks together to support an ill whale. When human helpers are able to refloat whales returning them to sea, many will return to the beach for a second time. It is likely that the bonds of social cohesion cause these refloated whales to return to shore if others of their group remain in distress.  Refloating stranded whales has to be carefully managed to ensure whales leave the beach together, or in large enough groups to offset the impulse to return.

You can help save long-finned pilot whales...

By supporting WDC, you can help long-finned pilot whales to live safe and free. Together, we can: