Take a deep dive into the right whale entanglements!

How do right whales become entangled?

Right whales feed in areas which are also very valuable for fishing in the Northeast US and Atlantic Canada. Two of the largest U.S. fisheries which overlap with right whale habitats are the lobster fishery and the Jonah crab fishery. These “fixed gear” fisheries set traps on the ocean bottom and retrieve them days or weeks later. Currently, this involves ropes that connect a buoy at the surface to a trap that lies on the ocean floor, meaning the rope spans the entire water column. This rope is called a “vertical buoy line” and is used to both mark the location of the fishing gear as well as haul the fishing gear back onto the fisherman’s boat.

As right whales swim and look for food in these waters, they sometimes bump into the buoy lines and become startled. This may cause them to roll into the rope and quickly become entangled. As right whales feed, they slowly swim through patches of food with their mouths wide open where they can accidentally run into the vertical buoy line and get it tangled in their baleen. 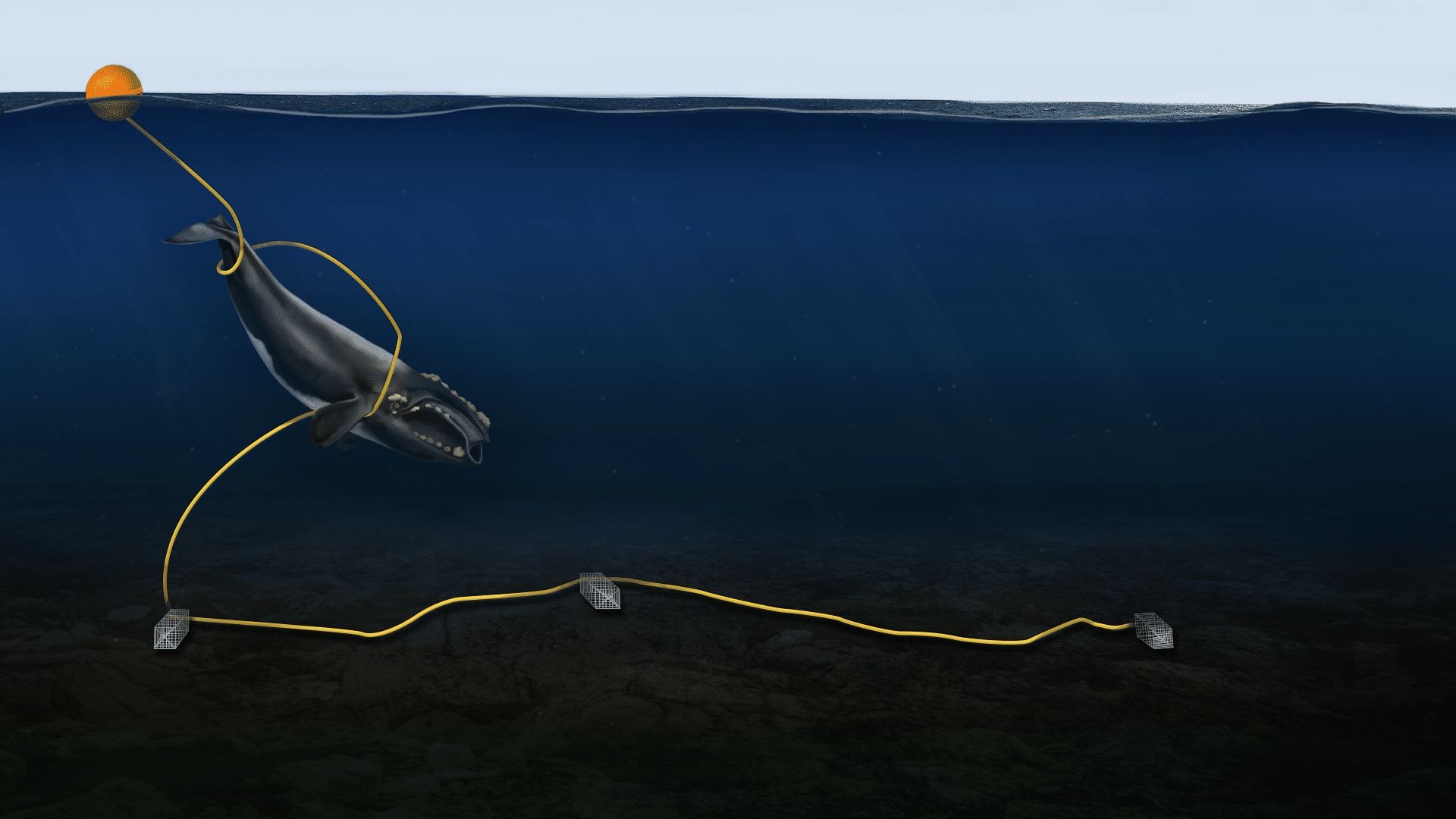 No! Entanglements are accidental and no fisherman wants to entangle a whale in their fishing gear. Fishermen sometimes lose fishing gear due to storms or passing ships so have no way of knowing their gear is missing because a whale became entangled in it. Fishermen also want to solve the problem of whale entanglements as the loss of fishing equipment is expensive and they risk valuable fishing areas being closed due to risk for entanglements. Entanglements are unfortunate accidents that happen when whales and fixed gear overlap in time and space.

How big of a problem are entanglements for right whales?

Entanglements are one of the top two modern-day causes for right whale deaths and a main reason why right whales are still endangered. Entanglements also pose a significant welfare issue as death from entanglement takes an average of six excruciating months.

Reducing entanglements can prevent right whales from experiencing stress, pain, and suffering. The worst case scenario is that a right whale becomes anchored in the gear and risks drowning. Those who swim away entangled can suffer from gruesome injuries and infections as the ropes cut into their bodies.  Even those entanglements that appear less severe can cause sub-lethal effects since carrying the fishing gear with them requires the whale to use more energy to swim and causes chronic stress.  Chronic stress weakens their immune systems and makes it more difficult for right whales to reproduce.

How can we reduce or eliminate entanglements for right whales?

In the short term, the answer is difficult. To reduce the chances of entanglements from happening, there needs to be fewer lines (ropes) in the water. One way to reduce lines is to have fishermen “trawl up” their gear. This means they put more traps between each vertical buoy line. While that does mean there are fewer lines in the water, it also makes that set of fishing gear heavier. If a whale gets caught in a very heavy set of fishing gear, it is more likely to be a serious entanglement and is more likely to lead to death.

Preventing entanglements is even more difficult.  Closing some areas to fishing during the times whales are present is the only way to completely prevent entanglements from happening in that particular area. During these closures, fishermen are forced to move their fishing gear to other areas which may be less valuable.  However, whales do not stay in one place and can swim into the areas where the fishing gear was moved and still get entangled.

The good news is that eliminating entanglements does not have to mean eliminating fishing.  Scientists, engineers, and conservationists are working with fishermen to create “on- demand fishing gear”, a way to fish without vertical buoy lines that stay in the water. This technology is finding a way to either fish without using a buoy or have the buoy pop up only when triggered. Take a look at our page dedicated to on-demand fishing to see how it all works!

Thanks to the input from fishermen who have tested the fishing gear, major improvements have been made over the past two years. Like cars and planes and space travel, what was once an impossible concept is now a work in progress!

Ask your Senator to support The SAVE Right Whales Act. This legislation would provide 10 years of funding for conservation efforts to find solutions to help fishers and shippers safely share the ocean with North Atlantic right whales. You can send an email to your senators and ask them to co-sponsor the SAVE Right Whales act using our easy email tool. You can also send your senator a postcard that lets them know why this issue is so important to you.

2. Share the story of the North Atlantic right whales

The more people who know and love this unique species, the bigger our collective voices will be when action is needed.

WDC is committed to doing the next right things to protect right whales and it all starts with you. To be the first to be alerted when action is needed, sign our Raise Your RIGHT Hand Pledge and you will receive email action alerts to help out!