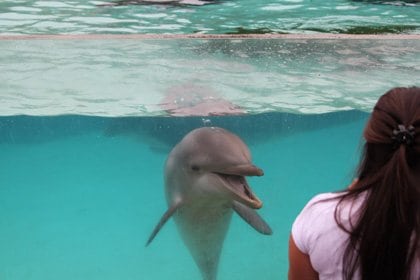 Up to 24 captive bottlenose dolphins have reportedly been sent to a new SeaWorld theme park in Abu Dhabi.

The marine park is due to open in 2023 and the dolphins, who were moved from a number of SeaWorld locations in the US, including San Diego, San Antonio, and Orlando, now face further confinement in small tanks and a bleak future performing for human entertainment.

SeaWorld visitor numbers plummeted following the increase in negative public feeling towards the keeping of whales and dolphins in captivity and the release of the film, Blackfish.  The film, documents the shocking death of Sea World trainer, Dawn Brancheau, who was killed in 2010 when the orca Tillikum dragged her under the water at SeaWorld in Orlando, Florida. The film also looks at many other similar incidents and raises safety questions about the wider captivity industry as a whole.

Ocean sanctuaries are one alternative for whales and dolphins that are currently kept captive in tanks and, as well as helping to establish the world’s first beluga whale sanctuary in Iceland with The SEA LIFE Trust , WDC is also working in partnership with other sanctuary projects. It is hoped these initiatives will help to encourage the rehabilitation of more captive whales and dolphins into natural environments around the world.