Most people in my home country of the Faroe Islands would like to see an end to the kind of dolphin hunt that sparked an outcry in September last year. Yet a poll has shown that a staggering 83% are in favour of continuing the traditional grindadráp, the slaughter of pilot whales. This is not a very encouraging statistic and shows that change does not come easily.

I suppose the main reasons behind the high level of local support for the hunts are the type of relationship that Faroese people have with pilot whales, and the conservative forces that are at play. I do believe though that the growing environmental awareness that we are witnessing at the moment will benefit the pilot whales greatly. 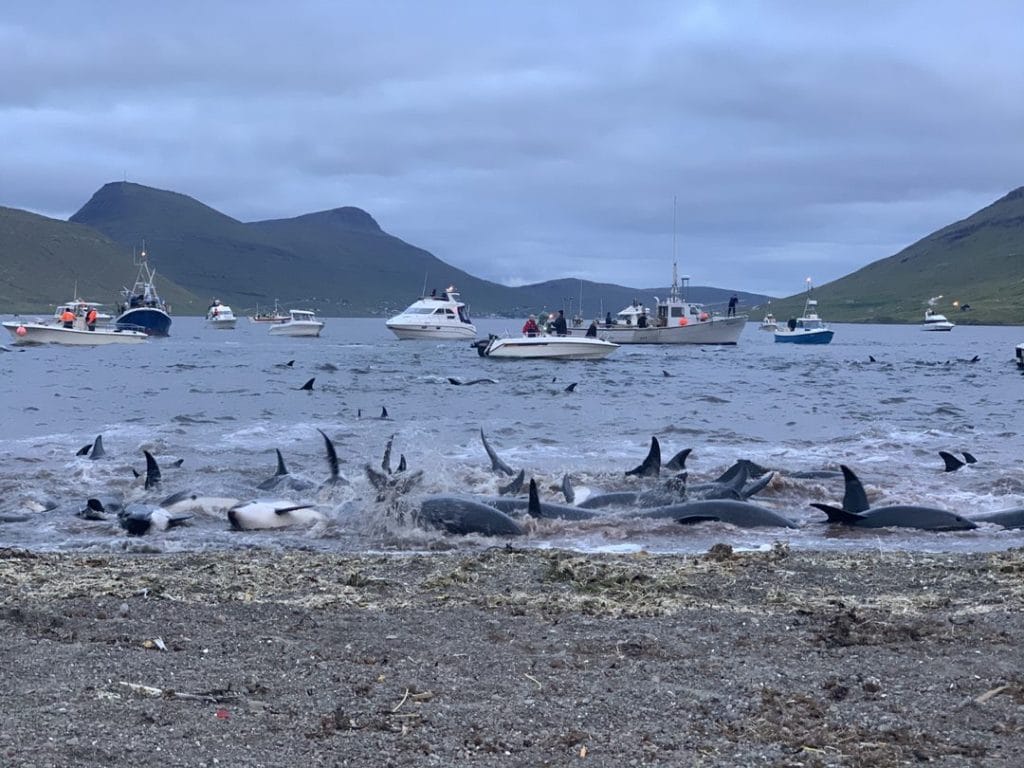 Are whales and dolphins special?

Whales and dolphins are amazing, fascinating and intelligent beings. Science has shown that many species are both sentient and sapient, they exhibit complex social behaviour, and they are capable of experiencing emotions such as empathy. Several species even have their own culture. Unfortunately, on the Faroe Islands most people don’t recognise whales and dolphins for who they are, and there are some good reasons for that.

When observing non-human animals, whether captive in zoos, domesticated on farms, or in the wild, people, especially children, often express curiosity and joy. For a moment we connect with the being behind the physical appearance that is so different to ours. We may even make eye contact and sense a certain familiarity. But when it comes to eating animals, people quickly have to shut off that connection again. How could they otherwise eat them?

It is this type of distinction that people make between what they perceive as ‘food animals’ and other animals that lies behind the continuation of the Faroese grindadráp. A distinction that is often culturally defined, but not always. As long as pilot whales are not recognised as complex, sentient and intelligent beings who belong in the wild ocean and have the right to live unharmed, the hunts may very well continue. A change of attitude is needed for the demand for whale meat to drop. 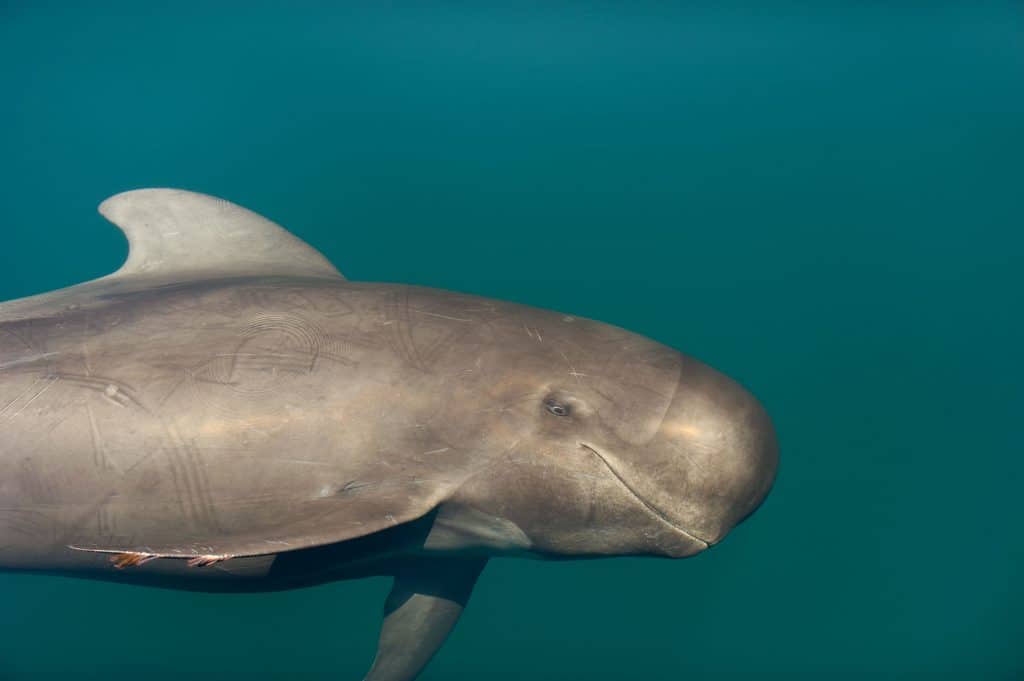 Understanding that pilot whales are intelligent, sentient beings is key to ending the hunts © Christopher Swann

Since the Viking Era, pilot whales have been hunted for food in the Faroe Islands, a rough and isolated archipelago in the middle of the North Atlantic Ocean. My Faroese ancestors depended on ocean resources for survival, and pilot whales were an important source of food. It is only in relatively recent times, along with modern globalisation, that one could confidently argue that the practice of hunting pilot whales is no longer necessary.

Today, modern equipment is used to drive the pilot whales toward the beaches approved for slaughter. With motorboats, cars, internet and mobile phones the hunt is far from what it used to be back when communication means were limited to smoke signals and messages by foot and men were risking their lives in wooden rowing boats to bring food for their families. Traditional elements of the grindadráp do still exist, like the distribution system and the communal aspect, but considering what we know scientifically about whales and dolphins today and the fact that the meat is contaminated and no longer suitable for consumption it is no wonder the slaughter is accused of being a blood sport. 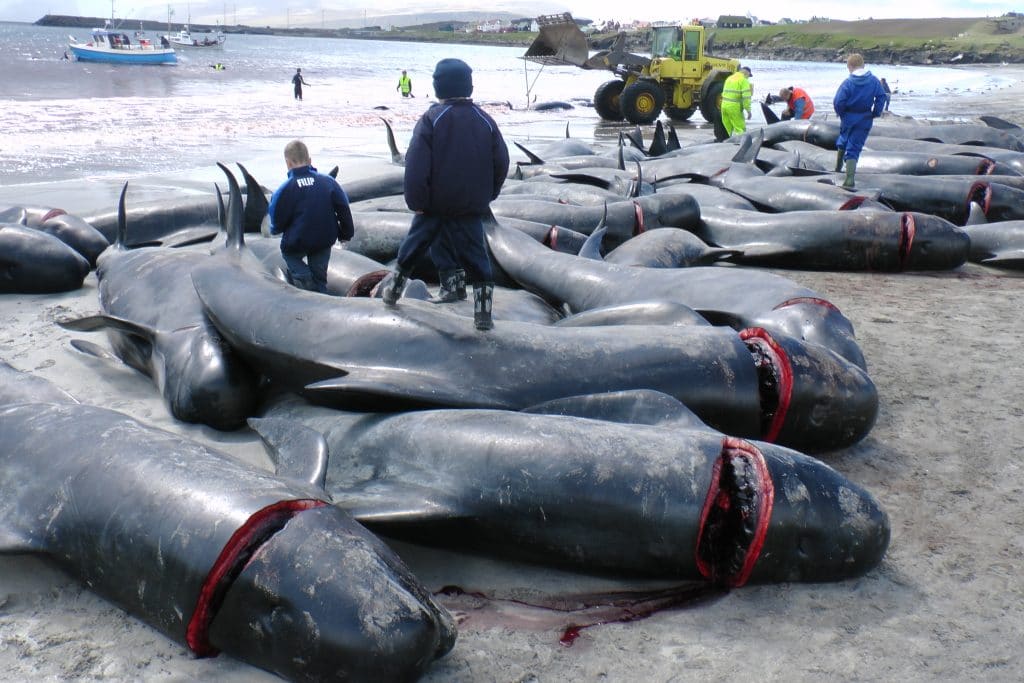 The modern hunt is not about human survival

Despite the overwhelming pressure and criticism coming from around the world, many Faroese people, more than 80% according to the survey, insist on holding on to this remnant of the past. The Faroe Islands have only 53,000 inhabitants who live in around 100 towns and villages. It is a fishing nation where fish and fish products account for more than 90% of the country’s export value. Culture and politics lean towards conservative.

Hunters everywhere often argue that it’s better to eat animals that have lived a free life in the wild until their death than animals that have lived their entire very short lives in confinement. A frequently used argument by Faroese pro-whalers too. This sentiment is hard to disagree with, isn’t it? But what if neither is a good option?

Practically no one who knows the inside of industrial farms considers this a good way to raise animals for food. But that doesn’t mean that driving whole families of highly intelligent and social beings onto beaches and slaughtering them all in front of each other is any better. Certainly not. And let’s not forget that Faroese people consume both locally harvested meats as well as imported meats, such as from cows, pigs and chickens. It is usually not a question of either-or. 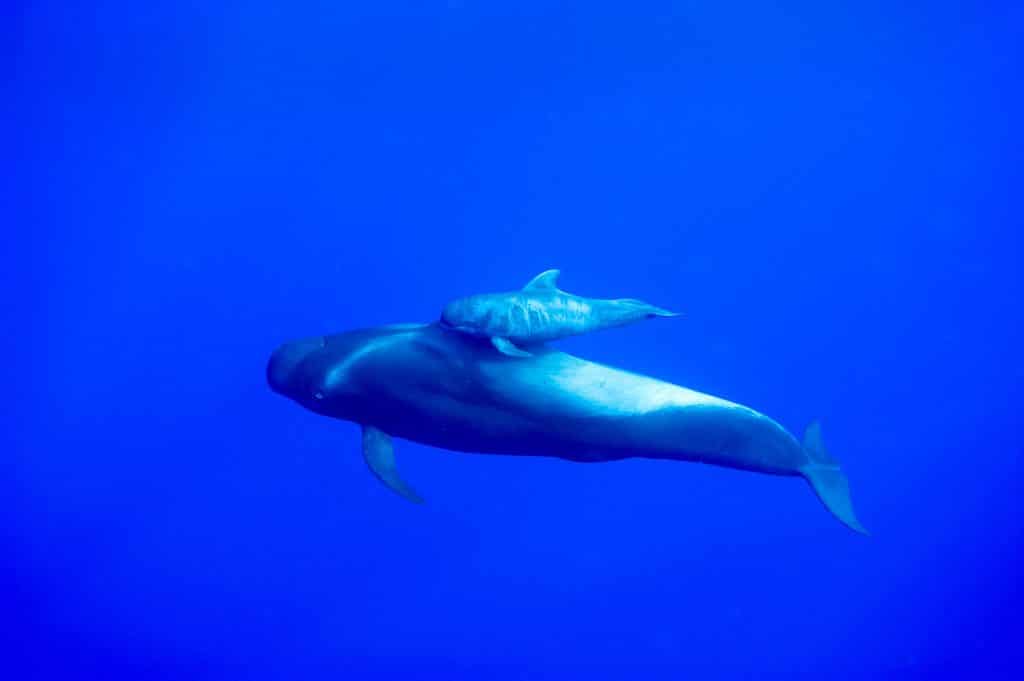 What then will drive the changes needed to save pilot whales in the future? Whale and Dolphin Conservation believe as I do that change needs to come from within the Faroe Islands. Historically, Faroese people have, understandably, not responded well to aggressive criticism from overseas. That’s why we are working hard to change hearts and minds within the islands and help Faroese people to appreciate pilot whales and other dolphins as the complex, sentient and intelligent beings that we know them to be.

I also believe that the environmental awareness that is growing every day as we are facing up to the human-caused destruction of this planet is going to bring more and more changes into our lives. A study from last year found that young Europeans aged 15-35 worry about climate change and environmental degradation more than any other major threats to the world.

We aim to increase understanding of the vital role that whales and dolphins play in fighting climate breakdown - they are our allies in fighting the climate crisis. So perhaps Faroese youth will lead the way as they come to realise that trying to save the climate and the natural world from pollution, habitat destruction, resource depletion and wildlife extinction and killing off whole pods of pilot whales in the name of tradition and delicacy do not go hand in hand.

DONATE TO END THESE HUNTS FOR GOOD