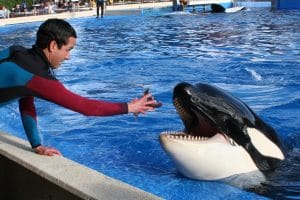 SeaWorld San Diego has announced the death of yet another orca held in captivity.

According to reports Amaya, a six year old female orca died suddenly after showing signs of illness just a day earlier. She was the youngest orca at SeaWorld, and her mother, Kalia and her father, Ulises are also held at SeaWorld San Diego. The exact cause of Amaya’s death may not be known for a few weeks.

WDC does not believe in keeping whales and dolphins in captivity. These intelligent creatures would roam for miles each day in the wild but in captivity they are not able to do so.

In captivity, they show repetitive behaviors which indicate chronic stress. They also live shorter lives in captivity than they do in the wild.

One of the goals of WDC is to End Captivity. Thanks to your support we have already persuaded Virgin Holidays, British Airways, TripAdvisor and others to stop supporting this cruelty. Please help us end captivity.