We’re very sad to share the news that Kina, the false killer whale held at Hawaii’s Sea Life Park, has died unexpectedly this week.  An examination will be performed but the results will not be known for a few months.

Kina was the last survivor of Japan’s drive hunts in the U.S.  She was captured in 1987, sent to Ocean Park in Hong Kong and then to Hawaii, where she was used by the U.S. Navy and the University of Hawaii for echolocation research.  Kina lived in sea pens until she was “retired” from the University of Hawaii in August 2015, when she was moved to Sea Life Park.  Concerns were raised immediately over her living conditions there, as she was kept in an isolated tank behind the scenes, separated from the bottlenose dolphins she had been living with, and held with no companions and no shade.

WDC worked with partners in Hawaii to push Sea Life Park to improve Kina’s welfare and give her a true retirement to a sea pen.  The marine park announced a $30 million improvement plan late last year, though it appeared none of the funds were dedicated to upgrading the dirty, shallow tank that Kina was held in.

We’re heartbroken that Kina’s life ended so sadly, and that Sea Life Park would not do more to improve her welfare.  In the wild, false killer whales are highly social, live in large groups, and are usually found in deep waters.  Females can live to be over 60 years old, and Kina was estimated to be only around 44 years of age.  She could have, and should have, spent the remainder of her life in a sea sanctuary with dolphin companions, closer to natural conditions than in a small concrete tank.

WDC will continue to keep working to end whale and dolphin captivity worldwide, and ensure individuals like Kina can live better lives in sea sanctuaries. 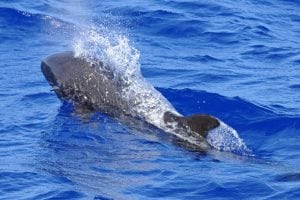 10/14/2021
Leonardo Da Silva/Flickr A disturbing report on the conditions at the Miami Seaquarium from the United States Department of Agriculture (USDA), released along with an...

10/12/2021
To celebrate spooky season, our WDC North America team decided to do our part to tackle a scary problem - plastic pollution! We started last...
Load More