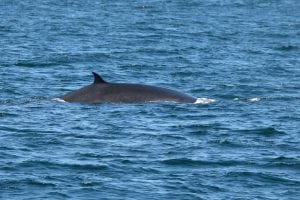 Japanese whalers returned to port today after completing the first commercial hunt since Japan left the International Whaling Commission (IWC) at the end of June.

The whalers killed 187 Bryde's whales, 25 sei whales and 11 minke whales, bringing back a total of around 1,430 tons of whale meat.

The Japanese Government announced that it would be leaving the IWC earlier in December 2018 and begin allocating its own quotas to the country's whalers. The whaling took place within Japan's 200 mile Exclusive Economic Zone (EEZ).

Fewer than 300 people are involved in the Japanese whaling industry. There is only limited demand for whale meat within Japan and the government provides millions of pounds of subsidies to the industry each year.

Many Japanese instead now enjoy seeing whales alive in the waters around Japan, where whale-watching has now been thriving for 30 years.