The bill comes at a pivotal point in the fight to save the North Atlantic right whale from extinction; 2 percent of the world’s right whales died this summer alone. Without urgent action, this iconic species could be effectively extinct within the coming decades. Only about 400 North Atlantic right whales remain on Earth, and less than a quarter of them are breeding females. In just the last two years, 28 of these whales have been found dead, largely because they have become entangled in fishing gear or been struck by vessels.

If the SAVE Right Whales Act becomes law, it would establish a new grant program to fund projects between states, nongovernmental organizations and members of the fishing and shipping industries to reduce the impacts of human activities on right whales. Specifically, it would authorize $5 million annually from 2019-2029 in new funding to develop, test and implement innovative technologies and other strategies to reduce the two main causes of North Atlantic right whale deaths: entanglement with fishing gear and vessel collisions. For example, the Act could provide critically needed funding for projects intended to develop, test or use innovative fishing gear modifications that would significantly reduce the risk of entanglement. 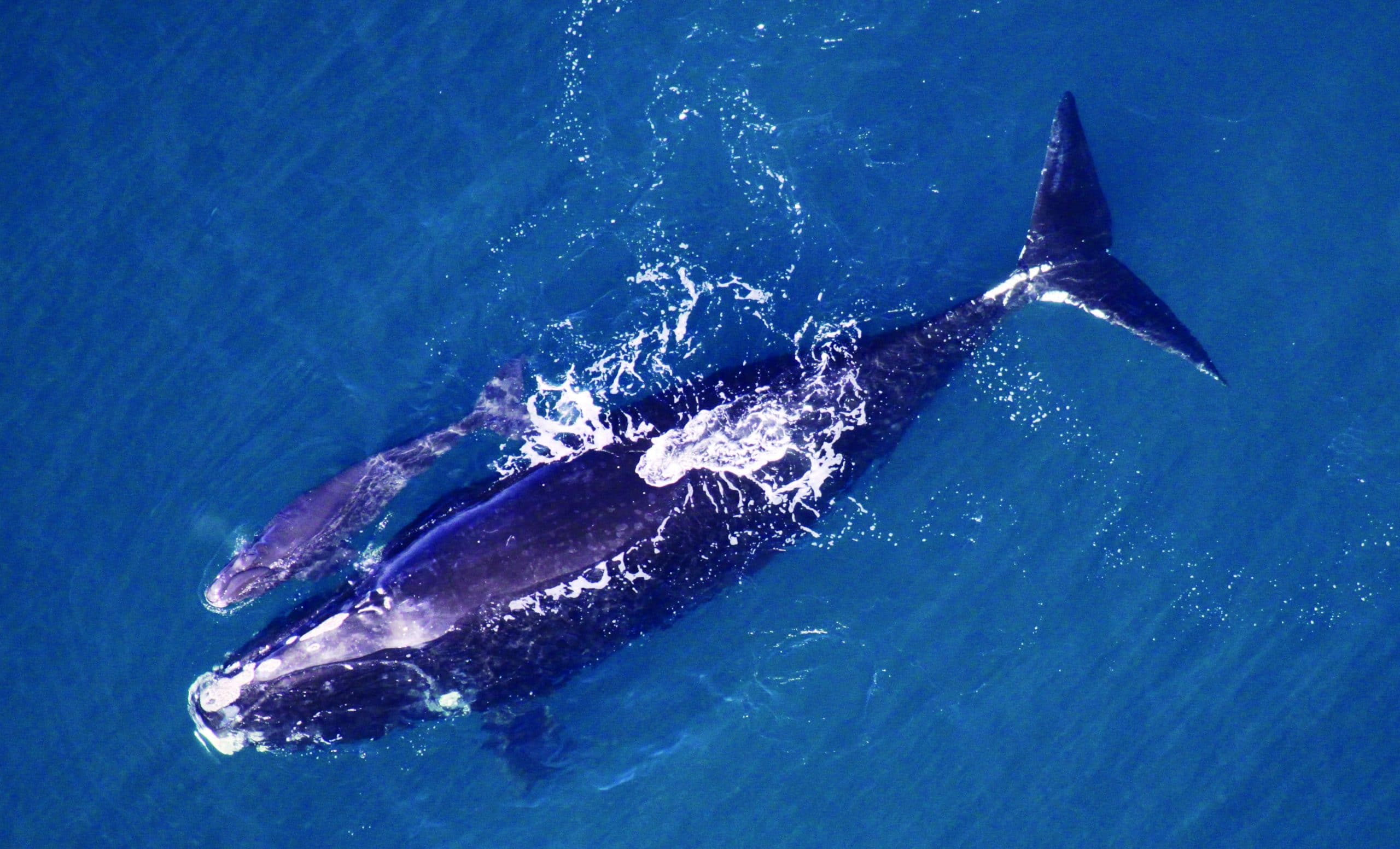 Photo taken by Sea to Shore Alliance under NOAA Permit #15488 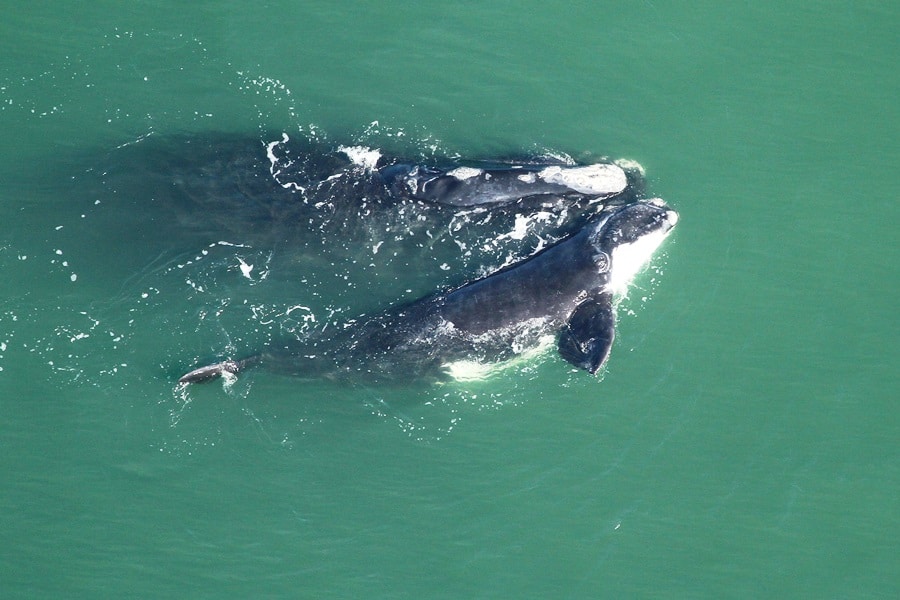 A coalition of environmental and animal protection organizations reacted to the bill introduction:

“This bipartisan effort in the Senate has the potential to save a species on the brink of extinction,” said Nora Apter, deputy director of federal affairs at Natural Resources Defense Council. “The sooner Congress enacts this legislation, the better our chance of ensuring right whales survive and rebound for the continued benefit of our ocean ecosystems, and for future generations to enjoy.”

“The threats from ship strikes and entanglement in fishing gear will soon mean extinction for this critically endangered species if we don’t take immediate action,” said Kitty Block, president and CEO of the Humane Society of the United States. “Let’s do ‘right’ by right whales and secure the critical funding needed to address the ongoing decline in the population of North Atlantic right whales before it is too late and these beautiful creatures are wiped from our planet.”

“Researchers, fishermen and government officials coming together is the only way that we will have a long-term impact on the future of North Atlantic right whales,” said Vikki Spruill, President and CEO of the New England Aquarium. “This proposed bill is a great step toward finding solutions that will protect both whales and the livelihoods of the fishermen who work on the ocean every day.”

“With fewer than 410 individuals remaining, we cannot stand idly by as North Atlantic right whale population numbers continue to dwindle. Congress should provide funding for conservation of right whales that also allows the shipping and fishing industries to continue to grow the U.S. economy,” said Sara Amundson, president of the Humane Society Legislative Fund. “We commend Senators Democratic Senator Cory Booker of New Jersey and Republican Senator Johnny Isakson of Georgia for taking a stand to protect this critically endangered species and we urge swift passage of the SAVE Right Whales Act.”

“We are heartened that members of Congress on both sides of the aisle recognize the precarious fate of the North Atlantic right whale,” said AWI President Cathy Liss. “Population estimates show that few reproductively active females remain, and recent severe losses underscore the dire need for Congress to pass legislation that would bolster conservation efforts for years to come. Without immediate action, this species could be lost forever.”

“With an estimated population of fewer than 400 individuals, the North Atlantic right whale is in crisis. The SAVE Right Whales Act will enable scientists, conservationists and industry to work together to save this iconic animal from human-caused extinction. There is no time to waste,” said CT Harry, Marine Campaigner at the International Fund for Animal Welfare.

“What is killing right whales is accidental and preventable.  Therefore, with support and a commitment to take action, this species can be saved” said Regina Asmutis-Silvia, executive director of Whale and Dolphin Conservation’s North American office.

“This legislation comes not a moment too soon,” said Erica Fuller, senior attorney at Conservation Law Foundation. “The only way to avert the tragedy of extinction is for fishermen, the shipping industry, scientists, and regulators to work together to come up with real solutions. The time for dithering and half-measures is over.”

“We applaud Senators Booker and Isakson for their leadership on this critical issue. Without immediate intervention to address human-caused deaths, the North Atlantic right whale will continue its march toward extinction. Since 2017, 28 whales are known to have been killed, and only around 400 now survive. We strongly urge Congress to waste no time and enact this bipartisan bill,” said Jane Davenport, senior attorney at Defenders of Wildlife.

“Beyond the loss of experiencing the beauty and strength of these animals, the societal, ecological and environmental consequences of this species’ extinction would be far-reaching, with the ripple impacts yet unknown. Time is of the essence for Congress to enact the SAVE Right Whales Act,” said Dr. Hendrik Nollens, Vice President of Animal Health and Welfare for SeaWorld Parks and Entertainment.

“Without sustained efforts to protect the North Atlantic right whale, we could lose this iconic species forever,” said Whitney Webber, Campaign Director at Oceana. “This bipartisan legislation provides a critical source of federal funding to develop new and innovative solutions that can help bring this species back from the brink of extinction. We applaud Senators Booker, Isakson, and Carper for their leadership on this important issue.”

“Senators Booker, Isakson, and Carper deserve our thanks for working to protect the iconic North Atlantic Right Whale. Threatened by vessel collisions, offshore drilling activities, dwindling food supplies, and entangling fishing gear, these creatures are on an alarming downward spiral. The health of our oceans depends on the health of the right whale, and that’s why Congress needs to act fast,” said Steve Mashuda, Managing Attorney of the Oceans Program at Earthjustice.