It was a “whale of a weekend” for the Southern Residents and those who know and love this unique community of endangered orcas.  After being conspicuously absent from their traditional summer habitat in the inland waters of the Salish Sea – a transboundary body of water between Washington state in the US and British Columbia in Canada – the Southern Residents showed up in spectacular fashion early in the morning on July 5th.

They spent the day off the west side of San Juan Island, a place home to some of the best land-based whale watching in the world, delighting and entertaining everyone who had gathered on shore to welcome them, and a giant sigh of relief went up all over the island.  Members of J and K pods did their well-known “west side shuffle,” moving up and down the coast of the island, one of their most important foraging areas, hopefully looking for and finding salmon.

The biggest news of the weekend was a re-sighting of new calf J56, first seen in late May by Canadian whale watchers with The Whale Centre in Tofino.  A press release by the Center for Whale Research, the keepers of the Southern Resident orca census, officially confirmed the new calf, identified the new mother as 24-year-old J31 (Tsuchi), and announced their observation that J56 is a female!

This news is possibly the best thing that happened in this recent Southern Resident orca sighting.  For critically endangered populations, adding more females to the mix is vital because they are the ones to give birth to and raise more calves (sorry boys, you have a role to play, but overall you’re just not that important for endangered species recovery).  For orcas, females are even more important because they become the leaders of their family groups, are critical for the well-being of their pods, and hold “ecological knowledge” – the history, survival skills, and culture of their entire community.

Although the appearance of the Southern Residents in their summer home raised spirits and J56 sparked hope for this endangered population, the “big picture” context of this sighting highlights the critical status of the population.  Historically in the Salish Sea from late spring (May) through fall, the orcas were not seen in these inland waters for the entire month of June – a first in over 40 years of observation.  Their presence in historic summer habitat has been declining in recent years, linked to a lack of Fraser River Chinook, which makes up the majority of the orcas’ summer food source.  Without enough food available, the Southern Residents are spending more time outside this core summer area to look for salmon elsewhere, a significant change in the behavior and culture of this community.  So while we’re thrilled that the orcas finally returned to their summer home this year, the question remains – will they stay?

The former abundance of these Fraser River spring and summer Chinook runs brought all three Southern Resident pods together in the Salish Sea, providing opportunities for researchers to count them and confirm survival and new calves, and opportunities for the orcas themselves to forage together, socialize in the famous “Superpods,” and reproduce – activities that are all vital for the survival of the Southern Resident orcas and their culture.  Spending less time in the Salish Sea is concerning for the orcas themselves and for their way of life.  Even with this sighting, not all of the orcas have been seen yet this summer – L pod was not present over the weekend, and two orcas recently seen in poor condition (J17 and K25) have not been sighted by researchers and their status is currently unknown.

Restoring abundant salmon populations throughout the range of the Southern Resident orcas – from British Columbia to Monterey, California – and improving the ocean and river habitats that both salmon and orcas depend on is critical for the survival of this orca community.  That’s why at WDC we’ve focused on the “ecosystem approach” to endangered species recovery for our Southern Resident orca work.  We focus on restoring connected and resilient watersheds, reducing contaminants entering the environment, and creating a quieter, safer, protected home for the Southern Resident orcas.  We’re excited by the news of J56 (and L124, the other new calf born recently!), hopeful that the whole population will be seen safe and sound around San Juan Island soon, and recommitted to our work to ensure this special and unique orca community is around for generations to come. 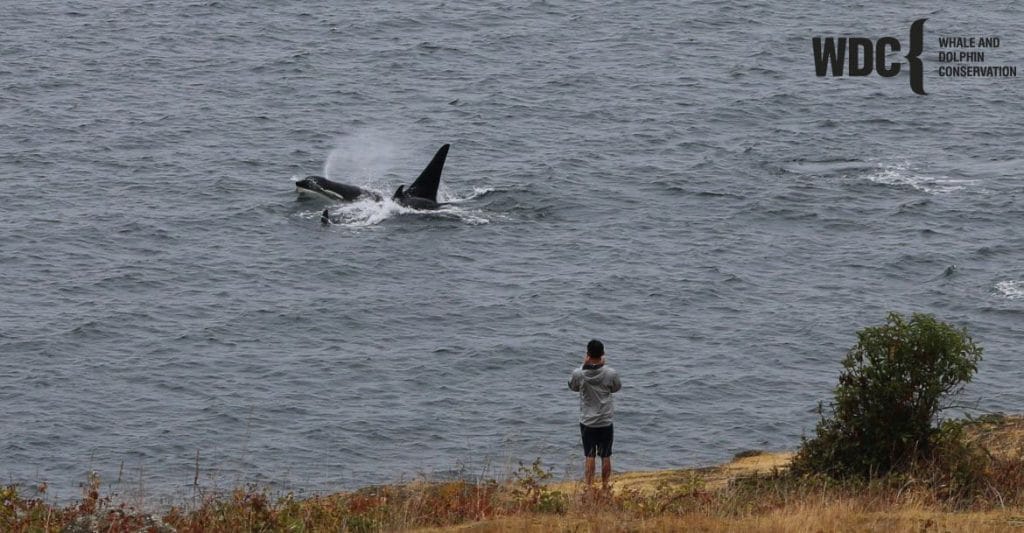