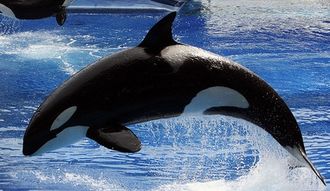 January 28, 2019- SeaWorld announced today that Kayla, an orca held at its marine park in Orlando, Florida, has died.

Kayla was 30 years old having spent her entire life in captivity since her birth in 1988 at SeaWorld’s San Antonio park.

Kayla’s father was an orca captured from British Columbia in Canada while her mother was taken from Iceland. In the wild, these two very different types of orcas would never have encountered one another.

Kayla died at a far younger age than would have been expected of a wild orca (ave. 46 years).

According to SeaWorld, her health became a concern on Saturday and her condition worsened over the weekend. A cause of death is not yet known.

SeaWorld has failed to release reports detailing the causes of deaths of the orcas it holds captive.  Last November, WDC joined other animal welfare and conservation groups legally challenging the US National Marine Fisheries Service’s failure to enforce permit provisions requiring SeaWorld to release necropsy and veterinary records of its deceased orcas.