Because of our name and the work that we do, we have many people who share with us videos of members of the public disentangling whales and other marine life including the recent video of a young man jumping into the water to free an entangled humpback whale. These videos have all of the elements of an amazing story- danger, bravery, and hopefully success. Yet, we rarely share these videos, and for good reason.  While the stories are compelling, the unintended consequences of these actions can be devastating.

While we don’t doubt the good intention to do right thing and save the whales, a lot more is at stake than the life of the one whale who inspires someone to take action.  Accidental entanglement in fishing gear is a worldwide issue and is the leading cause of death for many different species of whales and dolphins.  It also affects sea turtles, seals, and many other species of marine life.  In fact, we even saw an entangled shark this summer.

As someone who works to protect these animals at Whale and Dolphin Conservation and as someone who has experienced the heart-breaking discovery of a whale entangled in fishing gear, I am conflicted when I see videos of people who have not been trained in disentanglement taking on this dangerous role. I’m obviously happy when the stories have a happy ending: a freed whale, an uninjured rescuer, and a raised profile about a threat to whales.  Yet, at the same time, I can’t help but experience an immense amount of anxiety as I fear these actions will encourage others to literally “jump in” to help a whale.  Whether they are motivated by a passion for whales, the exhilaration of the risk, or the hope to become the next internet sensation, there are so many problems with ad hoc entanglements.

As the name implies, ad hoc entanglements happen without a plan…. and without training or authorization from the federal government.  The common thread between permitted and ad hoc entanglements is compassion for a suffering whale and the hope for a good outcome. The differences, however, can be life and death for the whale and the would-be rescuers.  There are definitely heroes in the disentanglement world and they rarely get attention or are featured in viral videos, but their work is life-saving.

I would like to introduce you to my whale-saving heroes, the trained members of the federally authorized disentanglement teams. 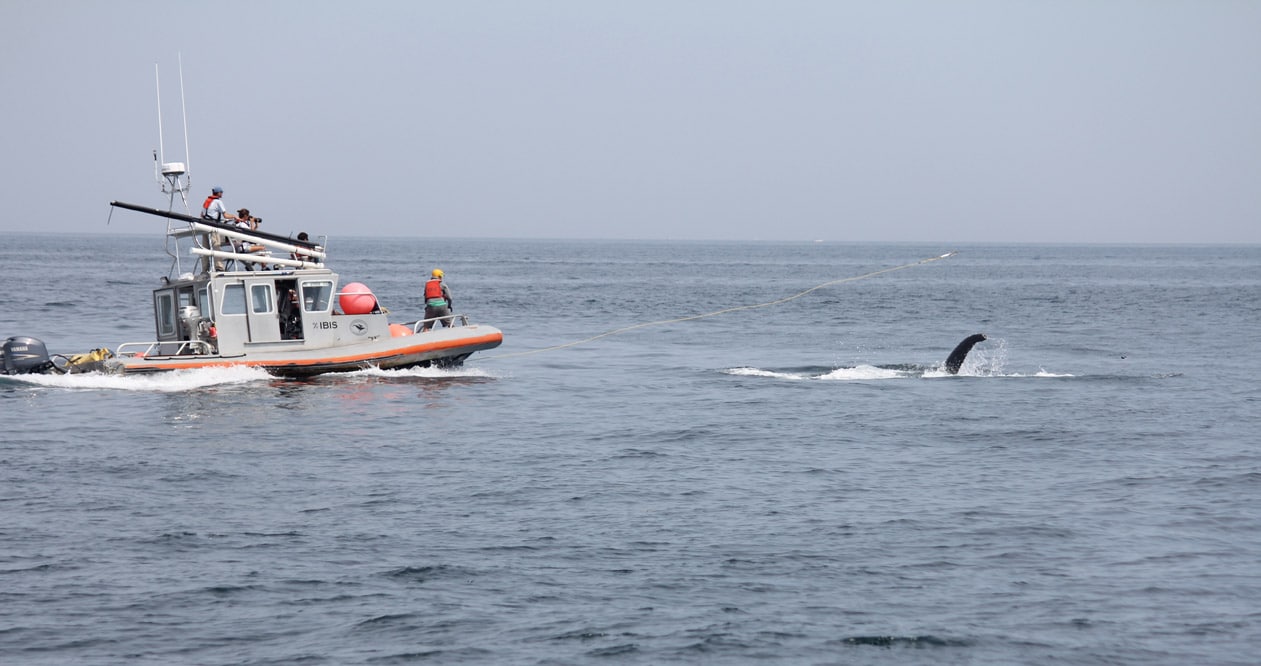 These individuals make incredible sacrifices to do what they do. They dedicate their lives and careers to saving these whales from life-threatening entanglements.  Only after intensive trainings and apprenticeships, which sometimes can take years to complete, do they take on the challenge to risk their lives to save whales.  When I think of their day-to-day lives, I’m still amazed that they can stay positive. Without hazard or on-call pay, they are available 24/7 to respond to entangled animals.  The ping of a text or chime of a call brings on the dreadful adrenal rush which may be their only nourishment for the next 12 to 24 hours as they pack their sharp tool kit and head out to sea in search of a scared and wounded wild whale who does not know they are there to help.

To do this once is amazing in itself. To do this day after day makes them superheroes.

Dedication and passion may drive them, but their training and pre-planned rescue attempts are what keep them alive.  Disentangling a whale can be life-threatening to both the rescuer and the whale.  While we have all heard the feel-good stories about whales helping in their rescue, or thanking their rescuers for freeing them, the reality is not a fairy tale. After a short conversation with any disentanglement team member, you will politely receive a reality check. The whales are in pain, scared, and evade rescue efforts.  They react defensively, and sometimes respond with a flick of a tail or flipper which is instantly lethal to anyone on the receiving end.  Each approach can further agitate an already anxious whale, further decreasing the odds of success.

Unlike what is seen in the feel-good videos are the tragic realities of disentanglement attemps. A distressed and entangled whale led to the death of a New Zealand diver in 2003, who attempted an in-water disentanglement. Even boat-based disentanglements can be life threatening. Just last year, Joe Howlett, a seasoned and trained rescuer, was tragically killed during a right whale disentanglement when the whale’s tail rose above the water’s surface and came down on the front of the boat where he was stationed. Even with experience and training, the risk to the would-be rescuers is all too real.

As is the risk to the whales themselves. Unfortunately, even the best intentions can threaten more whales than just the one in front of you.  Both the Canadian and US governments temporarily suspended all authorizations to disentangle whales when Mr. Howlett was killed last year.  While the US government phased in authorizations within weeks, it took months for Canada to allow disentanglements to once again take place.  Whales, however, continued to get entangled during the suspension when trained rescuers were not able to respond.  If a member of the public is killed, the suspensions may be permanent, leaving countless whales to die.

Even for those whales who appear to be saved, the happy ending may end with the story, as the reality may be very different.  If you ask those familiar with disentangling whales they will tell you that entanglements are typically complicated wraps of rope through the whale’s mouth or around a submerged flipper, none of which is easily visible from the surface.  It is a rare case to have only a single rope going across the back of a whale requiring only a single cut to shed the gear. Without the right tools, equipment, and experience, the random single cut of a line could further constrict another wrap, hastening the whale’s suffering as the remaining line cuts into the flesh, and eventually sawing through the bone of the whale hailed as “saved”.

Would-be disentanglers should all be required to visit the exhibit of Spinnaker at the Center for Coastal Studies in Provincetown, MA. Spinnaker, a once beloved and vibrant humpback whale, was disentangled on three separate occasions – two of these entanglements were extremely complex and undoubtedly life-threatening. The team spent many hours with Spinnaker, trying to get her out of trouble, as they strategically made cuts through the rope that restricted her. Yet, only a short time after their last attempt to free her, she was found dead.  The necropsy (animal autopsy) showed that the fishing gear from her earlier entanglement remained embedded in tissue and bone of the roof of her mouth, undoubtedly causing immense pain.  She had never been freed from her entanglement.  Spinnaker’s skeleton, complete with the piece of fishing gear which contributed to her death, hangs in display at the Center for Coastal Studies as a reminder of the agonizing deaths whales experience due to entanglements and that disentanglement is not a long term solution to this threat.

What You Can Do:

Join WDC in our fight to end whale entanglements.  Thank you!