UK Secretary of State for the Environment, Michael Gove announced a Fisheries Bill in Westminster that says it will ‘ensure that negative impacts of fishing activities on the marine ecosystem are minimised.’

The announcement states that the Bill will deliver on the UK government’s commitment to sustainable fishing and marine conservation. 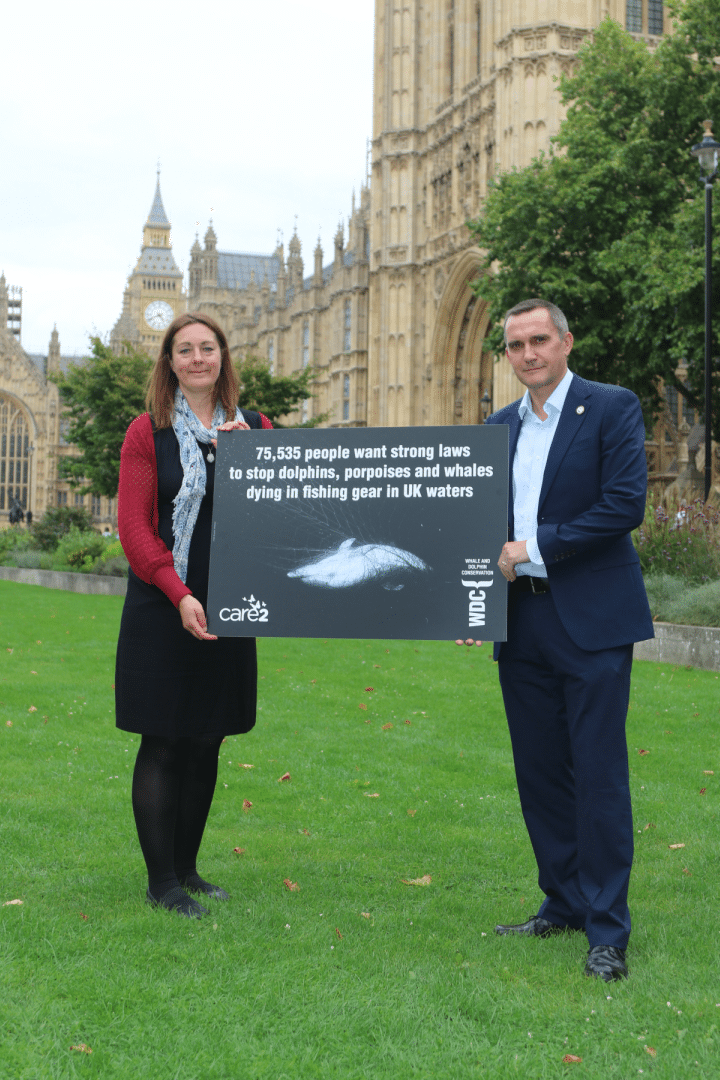 WDC is delighted that an aim of the Bill is ‘protecting the marine environment – by ensuring fisheries management decisions are taken strategically for the benefit of the whole marine environment.’ However, we are disappointed that, although the Bill mentions bycatch (dolphin, porpoise and whale deaths in fishing nets and gear), it doesn’t tackle it, leaving this to possible regulation at a later date.

Fishing vessels will have to ‘follow the UK’s rules’ when fishing in UK waters. The UK is better than any other EU Member State at monitoring and mitigating bycatch so this would level the playing field for UK fishermen and could improve things, but it’s not enough.

75,535 WDC and Care2 supporters signed our petition asking for strong laws to protect dolphins, porpoises and whales in UK seas after Brexit and UK Fisheries Minister, George Eustice promised that he would be a champion for reducing bycatch.

WDC responded to the recent government fisheries white paper to highlight entanglement in fishing gear as an issue that is inadequately managed by the UK government. Bycatch measures under the EU Common Fisheries Policy have been poorly implemented and there is much that can be done to improve them.

Research estimates that about 1,500 dolphins, porpoises and whales, predominantly harbour porpoises and common dolphins and 500 seals, are accidentally caught in UK fisheries every year. Such levels of bycatch have been occurring for many years. Worryingly, evidence also suggests increasing numbers of humpback and minke whales are entangled by fishing gear off the coast of Scotland. The numbers of dolphins, porpoises and whales,  and other protected species caught by non-UK fleets fishing in UK waters is not known, but likely greatly increases the total numbers bycaught in our seas.

WDC has made strong representation to the Department for Environment, Food and Rural Affairs (Defra) that to eliminate dolphin, porpoise and whale and other protected species bycatch, it is essential that:

Dolphins, porpoises, whales and other far-ranging marine species do not respect national boundaries, and so we will need to continue to work closely with our neighbours in Europe to ensure that the measures the UK put in place are replicated across the region.

We will follow the progress of the Fisheries Bill closely and continue to present evidence to EU and regional experts and the UK and devolved governments to end bycatch.