Even before the heartbreaking deaths in the critically endangered Southern Resident orca population this summer, Washington State was working on identifying solutions to their decline.  Washington Governor Inslee issued an Executive Order in March to jump-start immediate actions and initiate the Southern Resident Killer Whale Recovery Task Force, bringing together over 40 stakeholders from conservation groups, research organizations, industries, Tribes, and state & federal agencies.

The Task Force began its work in May, and has now released a draft report of their recommendations for state actions to help the Southern Resident orcas, salmon, and the habitats that support both.  They are now asking to hear from you.  Before the final version of the recommendations is sent to Governor Inslee in November, the public has the opportunity to weigh in on the list of potential actions.  The Task Force has set up a survey to elicit feedback on each action and is accepting comments through October 7th – the survey is available here.

Our colleagues at Whale Scout, Orca Network, Orca Behavior Institute, and Salish Sea Ecosystem Advocates put together a simplified guide to the draft recommendations, breaking down each action to its core function – check out this helpful document here.

With the recent death of Scarlet (J50) and the tragic “tour of grief” by Tahlequah (J35), who lost her newborn daughter in July, the eyes of the world have been focused on the Southern Residents with renewed interest in their survival.  The work of the Task Force took on new meaning and increased importance as the Southern Resident population declined to a new 34-year-low of just 74 orcas left in the wild.

Despite that additional weight hanging over the Task Force, many members still remain entrenched in defending their own interests and pushing personal agendas, like blaming seals and sea lions for the decline of salmon or ramping up hatchery productions, which can out-compete endangered wild salmon for limited resources.  The draft report contains some ambitious actions, but much more is needed to make a real difference for the immediate survival and long-term recovery of the Southern Resident orcas.

Now is the time to make your voice heard for Southern Resident orcas.  You can submit general comments to the Task Force or take a deep dive into the survey with us.  We’ve put together a list of key actions that we feel will have the most impact for the orcas and that need a lot of public support to move forward in the process (see below), and WDC and our partners will be submitting detailed comments with input on all the proposed actions.

With 5 minutes: Submit general comments to the Task Force through this form.  Suggested comments (feel free to copy/paste and add your own input to make the comments your own):

Thank you for the hard work and focus of the Task Force in developing recommendations to protect and recover the endangered Southern Resident orcas.  The world watched and mourned with the orcas this summer as Tahlequah (J35) grieved her newborn daughter and Scarlet (J50) slowly slipped away from us.  The orcas need food, clean and quiet waters, and space to forage, socialize, and live.  I urge the Task Force to take immediate action to address vessel noise and disturbance, pollution, and salmon availability:

With 30 minutes: Jump into the draft recommendations and support our list of critical actions.  This list is intended to reflect what we view as most important to start now for orcas and salmon, and most in need of public support.

In general, the recommendations need stronger language, concrete timelines and benchmarks to measure progress, and a plan for implementation and oversight to ensure the actions are happening at a timely pace and truly benefitting the orcas.

Prey: Habitat protection and recovery are vital to support self-sustaining runs of wild salmon.  We need healthy, resilient, and connected watersheds to maintain abundant salmon runs that are a crucial source of food for Southern Resident orcas.  The recommendations should increase and secure funding for habitat restoration projects and identify barriers to fish passage in Washington State to prioritize for removal, including the four Lower Snake River dams.

Vessel noise: Research has shown that noise levels received by orcas are primarily linked to vessel speed and the number of boats around orcas.  Speed limits, enforcement of current regulations, and measures to reduce noise from large vessels and address the additional impacts (risk of oil spill) are needed to create quieter waters for orcas and protect them from disturbance.

Contaminants: Pollution not only directly impacts orcas, but also harms salmon in their river and ocean habitats.  This is often the most difficult threat to tackle, because addressing pollution requires significant changes to infrastructure, regulations, and industry.  Meaningful long-term reductions in toxic contamination can only come from addressing these chemicals at their source.  We support all nine proposed actions to reduce pollutants affecting orcas and salmon, and the Task Force needs to hear from the public that action is needed in Year One to reduce contaminants in Washington State.  This work needs to start now to address the long-lasting effects of chemicals in our watersheds.

The Task Force had significant issues to tackle and a very short period of time to do so.  We greatly appreciate all the hard work and dedication of Task Force and Working Group members to finding solutions to the very tough challenges faced by orcas and salmon in the Pacific Northwest.  The draft actions range from simple and actionable to complex and ambitious, and we must now rally to remind the Task Force that our work does not stop here – much more is needed to save the Southern Resident orcas from extinction, and we must keep up the momentum and determination to follow through on these actions.

There is no single silver bullet that will save the Southern Resident orcas.  Their recovery and, more immediately, their survival, requires a suite of bold actions to address all the threats to this unique population: they need more salmon, clean and quiet waters free from disturbance, and a safe and healthy home.

WDC and our partners in the Orca Salmon Alliance have been pushing the Task Force to break out of the status quo and commit to bold, creative, science-based actions to ensure the recovery of the Southern Resident orcas, the salmon they depend on, and the ecosystem we all call home.  Please join us in advocating for #BoldActionNow and meaningful measures – we encourage you to take the time to make your voice heard for Southern Resident orcas and share your thoughts with the Task Force.  They need to hear from everyone, everywhere who cares about the survival of this extraordinary community of orcas.

We’re here to help!  Getting lost in the survey, have more questions, or want additional information?  Let us know!  Send us a message on Facebook, Twitter, or through email at contact@whales.org.  The comment deadline is October 7th – please act today! 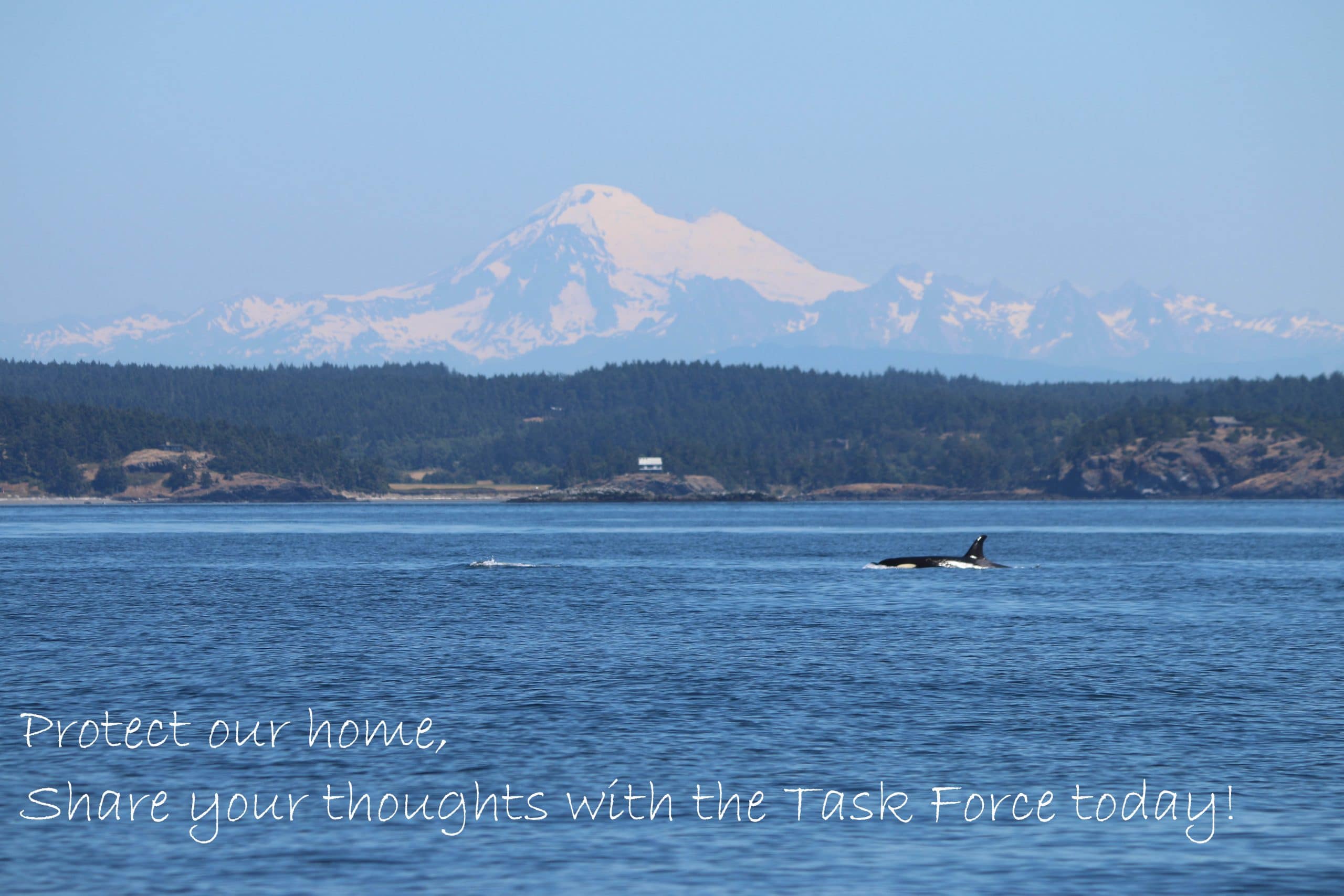