An unprecedented attempt has been launched in the Pacific Northwest to save ailing Southern Resident orca Scarlet (J50), a young female who has been in poor condition throughout the summer.  The Fisheries Department of the U.S. National Oceanic and Atmospheric Administration (NOAA), in partnership with Canada’s Department of Fisheries and Oceans (DFO), the Center for Whale Research, Washington’s Lummi Nation, and other groups, are working together to monitor, assess, medicate, and possibly even feed Scarlet.

The young orca is so emaciated (severely underweight) that the outline of her ribs and skull can clearly be seen (a condition known as “peanut head” in whales: when fat reserves are so depleted that the connection between their body and head is visible – and looks like a peanut).  She is also abnormally small for her age, and while she is traveling and keeping up with her family, she is also lethargic and trailing far behind her group at times. 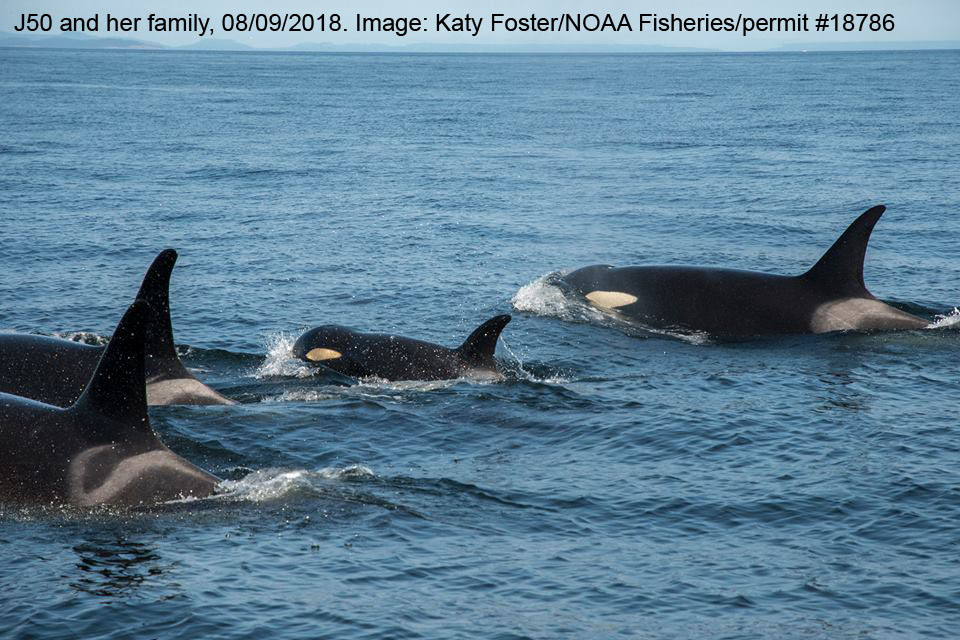 After declining in condition over the course of the summer, breath and fecal samples from Scarlet were collected in late July to determine if she had an infection.  Shortly after, experts from NOAA and DFO began efforts to conduct a veterinary health assessment and a plan was outlined to possibly provide Scarlet with live Chinook with the help of the Lummi Nation, and to try treating her through medicated live fish.  Permits to intervene were granted by both U.S. and Canadian governments to allow the agencies to medicate Scarlet.

Poor weather put response teams on standby last weekend, but Scarlet and her family were seen again on August 7th, and a response effort was launched on August 9th.  Veterinarians conducted a visual assessment, collected another breath sample, and administered a broad spectrum antibiotic through a dart.  Next steps include continued monitoring of Scarlet to see if she’s eating and further analysis of samples to identify what pathogen that could be contributing to her ill health.

This type of response – examining and treating a free-swimming orca in the wild who has not been separated from her family – has never been done before.  There are many unknowns in this attempt, but the fact that agencies are trying to help Scarlet is encouraging for many.  Researchers who had been monitoring her over the summer feared the worst for Scarlet as she continued to decline, and were sure that she would not survive on her own.  As a young female, Scarlet is crucial for the future of her endangered community of orcas, since she can grow up to have calves and contribute to the growth of the population.

The first of the “baby boom calves” born to the critically endangered Southern Resident orca community a few years ago, Scarlet entered the world under dramatic circumstances.  Her mother, Slick (J16) was 42 when Scarlet was born, past the age that researchers usually consider to be the end of female Southern Resident orca’s reproductive span.  She had marks from the teeth of other orcas (rake marks) around her dorsal fin, suggesting that her birth had been difficult and other orcas “midwifed” her out of her mother.  With just 75 Southern Residents remaining, their lowest population number in over 30 years, every individual orca matters.  Scarlet herself is a symbol of hope to many who follow this beloved orca population, and her loss would be an especially difficult one.

Southern Residents are fish-specialists, and depend almost entirely on Chinook salmon returning to the Fraser River in Canada and other watersheds in Puget Sound in the summer months.  Record-low levels of Chinook returning to the Fraser River in recent years have changed the presence of the orcas in their usual core summer habitat and have put additional stress on the struggling population.

NOAA has created a webpage specific to updates on Scarlet and Tahlequah (J35), the orca mother who is still grieving the loss of her newborn daughter.

Suggestions from WDC on how to help the Southern Resident orcas this summer.

A statement from the Orca Salmon Alliance on recent losses in the Southern Resident population.