In heartbreaking news from the Pacific Northwest, the Center for Whale Research has reported that a newborn calf has died less than an hour after being born.  On Tuesday July 24th, the Center observed a new calf born in the endangered Southern Resident orca population to a member of J pod, Tahlequah (J35), a 20-year-old female.  Sadly, a short time later the new baby died, and researchers witnessed a sight unusual for human eyes to see but something well known for these intelligent and emotional beings – the mother grieving her calf, carrying the body and refusing to let her go.  Tahlequah continues to carry the body of her newborn more than a week later, while her family swam with her.  This display of grief has been seen in the Southern Resident population before – too many times for these endangered orcas – in one of the most poignant signs that whales have culture and complex emotional lives.

What you can do to help Southern Resident orcas 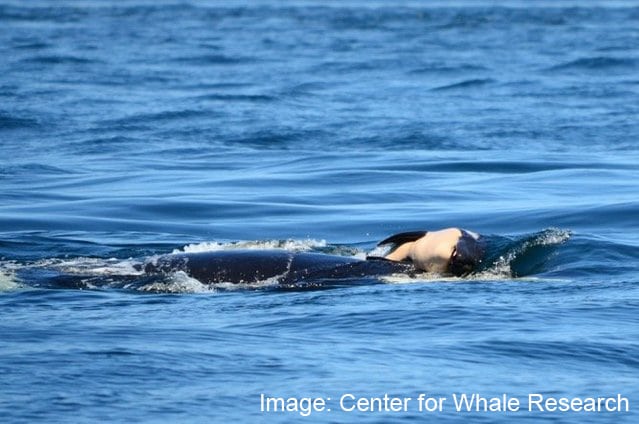 No new calves have been born and survived in the Southern Resident orca clan since 2015.  Their difficulty in growing the population has been linked to nutritional stress, with many stocks of Chinook salmon, their preferred prey, declining throughout the orcas’ range.  The orcas struggle to find scarce and scattered salmon amidst an ocean filled with increasing noise from vessels, construction, and sonar, and the continuing impact of contaminants can further impair their reproductive and immune systems.

One young Southern Resident orca, Scarlet (J50), who is the first of the hopeful wave of births that occurred in 2015 (Scarlet was born in December 2014), may be suffering from the cumulative impacts of those threats.  She is emaciated and struggling to keep up with her family, and researchers report that she is exceptionally small for her age.  Fecal samples (collected by Conservation Canines) and breath samples (collected by the National Oceanic and Atmospheric Administration) may provide some information on what is ailing the young orca, and if she can be helped.

Washington State’s Southern Resident Recovery Task Force continues to move forward with developing recommendations to help the struggling community.  With this loss and the poor condition of Scarlet in mind, the Task Force must include immediate measures to increase the availability of salmon to Southern Resident orcas throughout their range.  The Task Force can develop specific actions for Washington State and can reach out to neighboring states in partnership and coordination to save these whales.  They need food from rivers in British Columbia, Canada south to the Central Valley of California.

“Recovery for the Southern Resident orcas must be a collective and community effort,” said Colleen Weiler, WDC’s Jessica Rekos Fellow for Orca Conservation.  “The threats faced by the orcas and the salmon they rely on are complex, and there are no easy answers or one single solution that will save them. They need a combination of actions, including immediate steps to allow the orcas to forage on the salmon available to them right now, and efforts to restore our shared ecosystem.  The survival of the orcas, the salmon, and ultimately us depends on it.”

Posted in News and tagged Dam, salmon, Southern Resident orcas
Preferences
We use cookies to help give you the best experience on our website and information about how you can support us.
Manage options Manage services Manage vendors Read more about these purposes
View preferences
{title} {title} {title}