The FY2019 National Defense Authorization Act conference report was released by Congress yesterday, and it’s not great news for whales.  The report includes a rider that weakens provisions in the US Marine Mammal Protection Act, but not to the extent the original rider had proposed.

This NDAA will extend the time between the Navy’s required environmental reviews to analyze the harm caused to marine mammals while conducting training and readiness activities.  Currently, these reviews must occur every five years; the change extends the time to seven years.  The original proposal would have extended the review period to ten years.  The majority of harm posed by Naval exercises to marine mammals is related to sonar and underwater explosives, both of which have been known to harass, injure, and/or kill a variety of marine species.

“Protecting our country and our whales should not be mutually exclusive,” said Colleen Weiler, WDC Jessica Rekos Fellow for Orca Conservation. “The Navy’s slogan is ‘Forged by the Sea’ but by reducing its accountability for impacts on marine life, the future Navy cadets will be forged by an empty sea as increasing numbers of marine mammals are harmed without a timely review.”  This rider was included despite opposition by more than 100 House Democrats.

You can help WDC continue our work defending marine mammals and the laws that protect them by becoming a Flippin’ Awesome member! 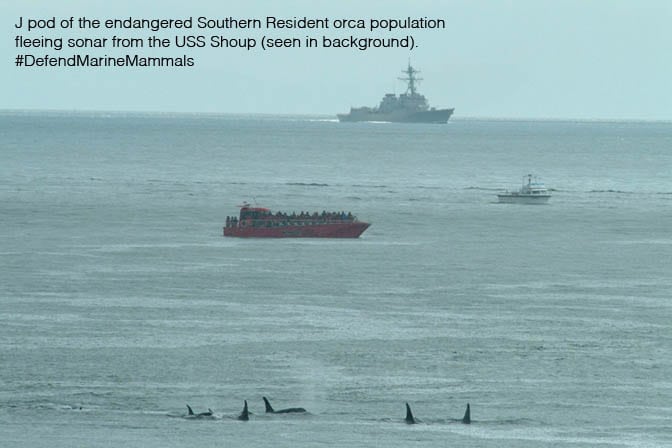 Posted in News and tagged mmpa, navy, north atlantic right whales, Sonar, Southern Resident orcas
Preferences
We use cookies to help give you the best experience on our website and information about how you can support us.
Manage options Manage services Manage vendors Read more about these purposes
View preferences
{title} {title} {title}