Life as a small whale or dolphin can be precarious at the best of times, but off the coast of Japan they face a sinister threat – the fishermen of Taiji. If they’re caught up in the maelstrom of one of the infamous ‘drive hunts’ the outcome is unlikely to be a good one. They’ll either be slaughtered for their meat or if they’re really unlucky, hand-picked to live out their lives in a chlorinated pool in some far-flung dolphinarium and forced to perform tricks for their dinner. In Taiji, once a pod of dolphins is spotted, fishermen bang on metal poles creating an underwater acoustic ‘curtain’ resulting in the dolphins becoming disorientated. They are then herded (or driven) together to shore. Some of the driven dolphins may be released, allowed to return to the ocean, alone, frightened and stressed – what fate awaits them?

These hunts are nothing new, in fact there’s a very long history of different types of whale and dolphin hunts happening off the coast of Japan, with different species targeted and different killing methods employed. Over the last few years however, most of the hunts of the smaller whale and dolphin species have declined, some have even faded into the annuls of history, yet in Taiji the fishermen are steadfast in their determination to continue and they’ve been finding new ways to secure their future as ‘dolphin hunters’. 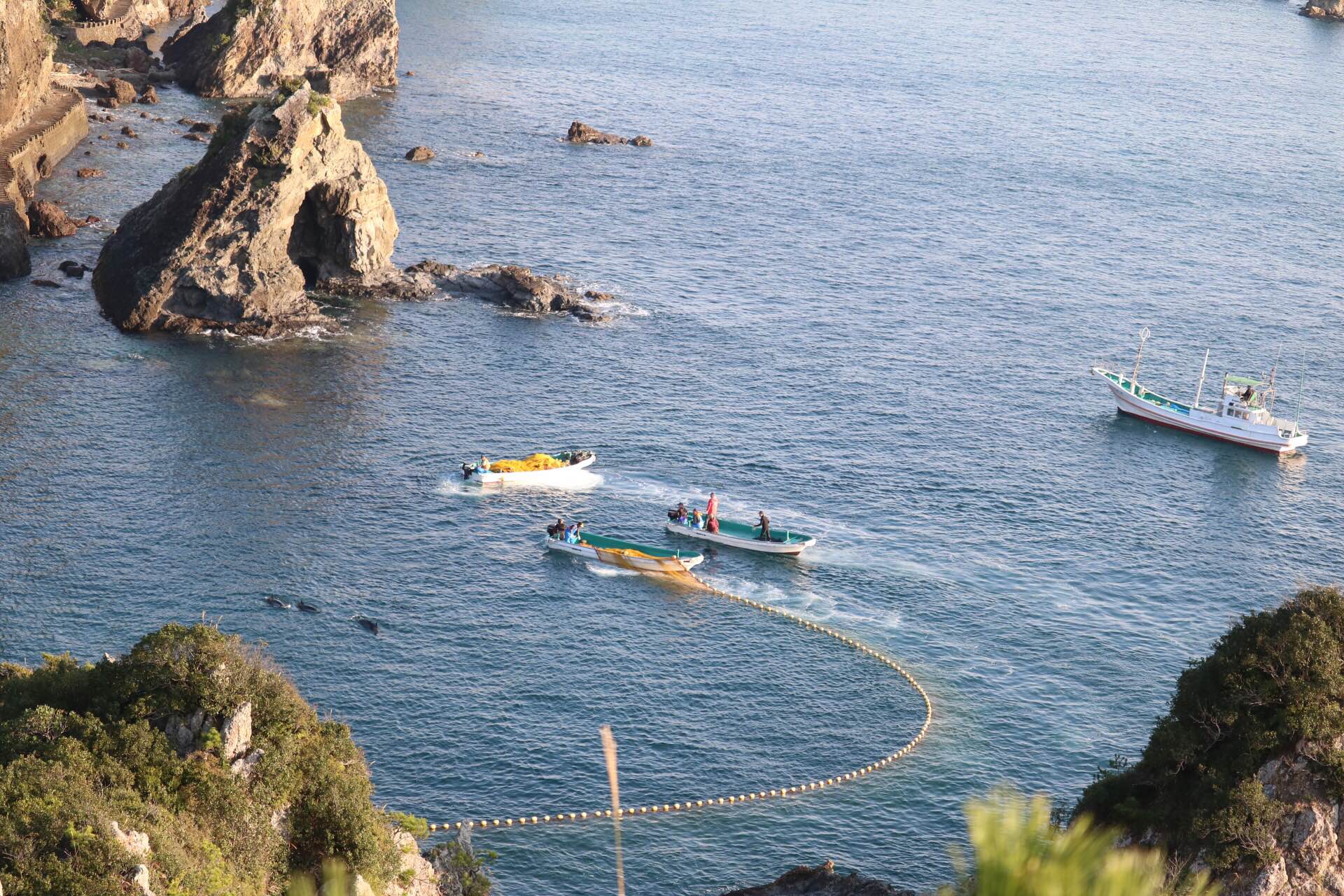 Historically, dolphins who were driven to the shore were slaughtered for human consumption, but in recent years the driving force seems to be the demand for live individuals to fuel the entertainment industry, both in Japan and overseas. You can see why there’s more and more focus on capturing good looking, healthy individuals (usually young females) to sell to theme parks when you consider that a dead dolphin fetches a few hundred US dollars, yet a live, trained dolphin could earn you US$150,000. In addition, more and more information is surfacing about the high levels of pollution in dolphins and small whales and the human health implications associated with eating contaminated meat. The link between these drive hunts and the captivity industry is even clearer with the news that Taiji fishermen just signed a five year, US$15 million deal with Chinese aquariums to supply hundreds of live dolphins.

Every year, on 1 September, the drive hunt season begins, and for the next nine months, if weather permits, the hunters will be out scouring the waters for their quarry. Every year, they are given quotas, determining the number of dolphins and small whales they are allowed to ‘take’, with no distinction made between how many are caught for meat or for captivity. Since 2010, the quotas have remained pretty much the same, just over 2,000 individuals from seven different species are allowed to be ‘taken’. In this past season however, things changed. Two new species were added to the list: the rough-toothed dolphin and the melon-headed whale. Initially quotas were issued for  20 rough-toothed dolphins and 100 melon-headed whales. Within only a few months the quotas were revised and the allowable ‘take’ of rough-toothed dolphin increased to 27, and melon-headed whales to 200. Less than a month later the quota for melon-headed whales increased yet again, now, 300 could be ‘taken’.

Many people questioned why new species had been added.

In truth we’ll likely never know the real reason, but it was probably a result of various contributing factors. Either way, in total, 926 dolphins and small whales from nine species were captured in the 2017/2018 Taiji drive hunt season – 206 were later released but their fate is unknown and so they should be considered in the total end of season figures.

Although it might not seem like it, it’s not all doom and gloom. The wheels of opposition are slowly turning and on both a national and international scale, things are changing.

There is a sea of change within Japan itself, with local activists taking to the streets to protest the hunts, accompanied by a substantial decrease in the demand for dolphin meat. WDC fully supports this approach as pressure from within will have more of an impact than any loud shouting from overseas.

On an international playing field, the 126 countries that are members of the Convention on Migratory Species (the UN body that makes decisions about species, marine and terrestrial, that cross national borders) adopted recommendations and guidelines opposing live capture in their waters and even more significantly, just recently, South Korea took a progressive step forward and banned the import of  dolphins live-captured in the Taiji drive hunts – and this is a country that has previously imported dolphins captured in drive hunts in Japan and still holds a number of those individuals in captivity.

I cannot sugar-coat what happens to whales and dolphins off the coast of Japan. What happens is barbaric and utterly unacceptable in this day and age, but as Bob Dylan says, times they are-a-changing!

Posted in Blogs & Articles and tagged Dolphin hunts, Japan, Taiji
Preferences
We use cookies to help give you the best experience on our website and information about how you can support us.
Manage options Manage services Manage vendors Read more about these purposes
View preferences
{title} {title} {title}