“The Gulf of St. Lawrence snow crab trap fishery no longer conforms with the MSC Standard for Sustainable Fishing and therefore, the fishery certificate is suspended.”-MSC

In an unprecedented series of events, 12 critically endangered North Atlantic right whales were found dead in Canada’s Gulf of St. Lawrence between June and September of 2017.  At least two of the dead whales were entangled in snow crab gear and an additional 5 live whale entanglements were also reported in the Gulf of St. Lawrence.  An attempt to disentangle one of those whales tragically resulted in the death of Joe Howlett, a trained member of the Campobello Whale Rescue Team.

In addition to the 12 whales killed in Canadian waters, 6 dead right whales were found along the US east coast between April 2017 and January 2018.  The unprecedented loss of at least 18 endangered North Atlantic right whales in less than 12 months has caused considerable alarm as these deaths comprise over 4% of the entire species of which only an estimated 450 remain.  While not all carcasses were examined for causes of death, those which were indicate that vessel strikes and fishing gear entanglements remain the most significant threats to the survival of the species. 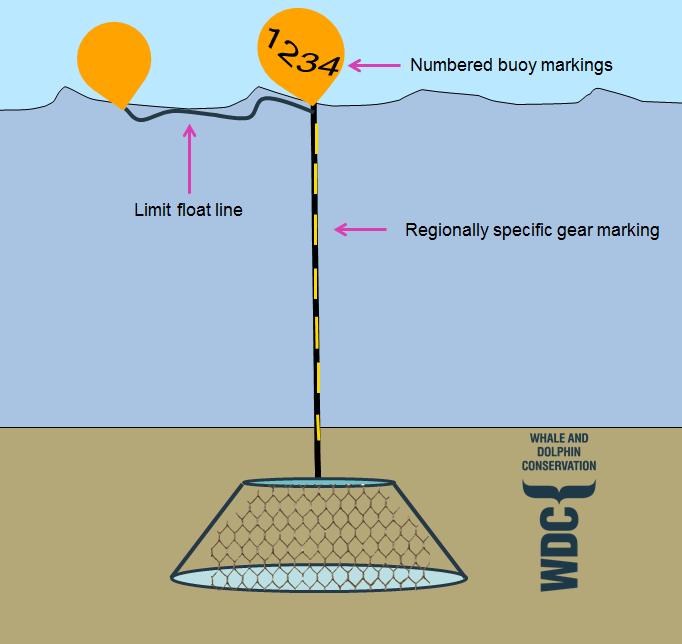 Like lobster gear and other fixed gear fisheries, Canadian snow crab fishing gear employs a vertical buoy line in the water column to mark the location of the trap which rests on the ocean bottom. Right whales are at risk of entanglement when they encounter the buoy lines, often rolling into the gear causing it to wrap around their heads, flippers, and tails.  When they carry gear with them, some whales develop significant cuts into their flesh and bones, dying from resulting infections or are unable to efficiently move or find food causing them to starveto death over time.

In January, the Canadian Department of Fisheries and Oceans announced four immediate measures to protect right whales from entanglements but the actual reduction in risk is unclear.   The measures proposed included increased gear marking to better identify entangling gear but fell far short of eliminating the use of vertical (buoy) lines.

Right whale conservationists and scientists are advocating for the development of remote gear retrieval technologies, or so-called “ropeless gear”, which would eliminate vertical lines in the water column and drastically reduce the risk of whales becoming entangled in fishing gear.

“We know that fishermen are not intentionally harming whales but it is also clear that the current fishing practices for fixed gear fisheries pose a high risk of entanglement and are therefore not sustainable,” said Regina Asmutis-Silvia, WDC-NA executive director. “We call on MSC to review its sustainable fishing standards by encouraging the development and implementation of ropeless gear as a truly sustainable fishing practice for the future of the fisheries and the whales.”

Since its incorporation in 2005, WDC’s North American office has run a dedicated program to save this imperiled species and worked to implement protective measures to save right whales from those threats. If you would like to help save North Atlantic right whales from extinction, please consider donating to support the work of WDC.