I’m sure you are as sickened as I am that every year from September to April, dolphins and small whales are still subjected to a bombardment of stress and cruelty in Taiji, Japan as they are hunted for meat or captured alive for display in zoos and aquaria. This annual bloodbath flies in the face of global outrage. Those taking part in the hunt, and the authorities that sanction it, do so knowing full well that the world watches in horror.

Despite your protests and the attention brought by Oscar-winning film, The Cove, and the best efforts of organisations like WDC, these hunts continue. Year after year dolphins and small whales suffer an unimaginably painful death or witness friends and family members being rounded up and taken away.

So far this season, a reported 53 bottlenose, Risso’s and rough-toothed dolphins and 11 short-finned pilot and melon-headed whales have been taken alive for the ‘entertainment’ industry while a further 485 individuals have been slaughtered. Other whales and dolphins corralled in the hunt have been released, their fate unknown, but it’s very possible that because of the stress they have suffered and without their family members, they will be short-lived.

Two new species, melon-headed whales and rough-toothed dolphins, were added to the hunters’ quota this year and these quotas have already been increased twice by the Government’s Fisheries Agency. We think this may be because success rates have been dropping for catches of other species, possibly because their numbers have been reduced by decades of unsustainable hunting.

Over the last decade or so, Japanese zoos and aquaria have increasingly used Taiji’s dolphin hunts to obtain new dolphins. They are captured and sent to the 50 or so aquaria that hold small whales and dolphins for public display, theatrical shows and swimming-with-dolphins programmes. Live dolphins taken from the hunts have also been shipped to aquaria in Armenia, China, Egypt, Iran, Russia, Saudi Arabia, Turkey, Ukraine and Vietnam. This international trade provides a massive financial incentive for the hunts to continue, and so drove our campaign to improve airline policy on the carriage of live dolphins captured from the wild and address the role that airlines play in this cruel practice.

One airline, Air China, had been reported carrying drive hunt dolphins to overseas aquaria, but repeated requests asking them to consider implementing a policy against the practice were ignored and we were forced to rethink our approach. Air China are part of an airline alliance called Star Alliance, which includes among its members Lufthansa, SAS and Air Canada, all of  whom do have policies against the carriage of wild-caught whales and dolphins. We were thus hopeful that an approach to Star Alliance’s CEO would lead the Alliance to develop an Alliance-wide policy against the carriage of wild-caught dolphins. If you were one of more than 41,000 people who signed our petition asking the Alliance to do just that, thank you very much.

Sadly, we haven’t so much to thank Star Alliance for, and our calls for action seem to have fallen on deaf ears. We have written again recently to the new CEO at Star Alliance, Jeffrey Goh, informing him of the level of support for our campaign and asking him to act on it. We have not heard back. Initially Star Alliance offered to help us get in touch with their members, informing us that ‘cargo’ policies (including the carriage of dolphins) are not part of Alliance governance. We thanked them for their offer of help but also asked them to make a statement acknowledging public concern on this issue and to play a pivotal role in developing positions against the carriage of wild-caught dolphins for all Alliance members, to which they responded no further.

While 13 Star Alliance members have supported our campaign and said ‘no’ to transporting wild-caught dolphins, we are still unsure where 12 others stand on the issue. Our letters to them remain unanswered too and Star Alliance doesn’t seem to want to help us further.

There is little point in banging our heads against a brick wall, but we’re not giving up either.  We will explore other ways of encouraging airlines to stop transporting wild-caught dolphins, alongside our other work to address small whale and dolphin hunts and live captures all over the world. You can be guaranteed that we won’t give up the fight, we just need to change tactics and find another way to win the battle.

If you would like to write to Star Alliance, then please do! Ask them to listen to international opinion and use Star Alliance’s influence to help its members develop position statements against carrying live, wild-caught dolphins. The email address is: [email protected] Do send a copy of your email to us at [email protected] and forward on any response you might receive.  Or, if you are on Facebook, you can direct message them: https://www.facebook.com/staralliance/

Thank you for your support. 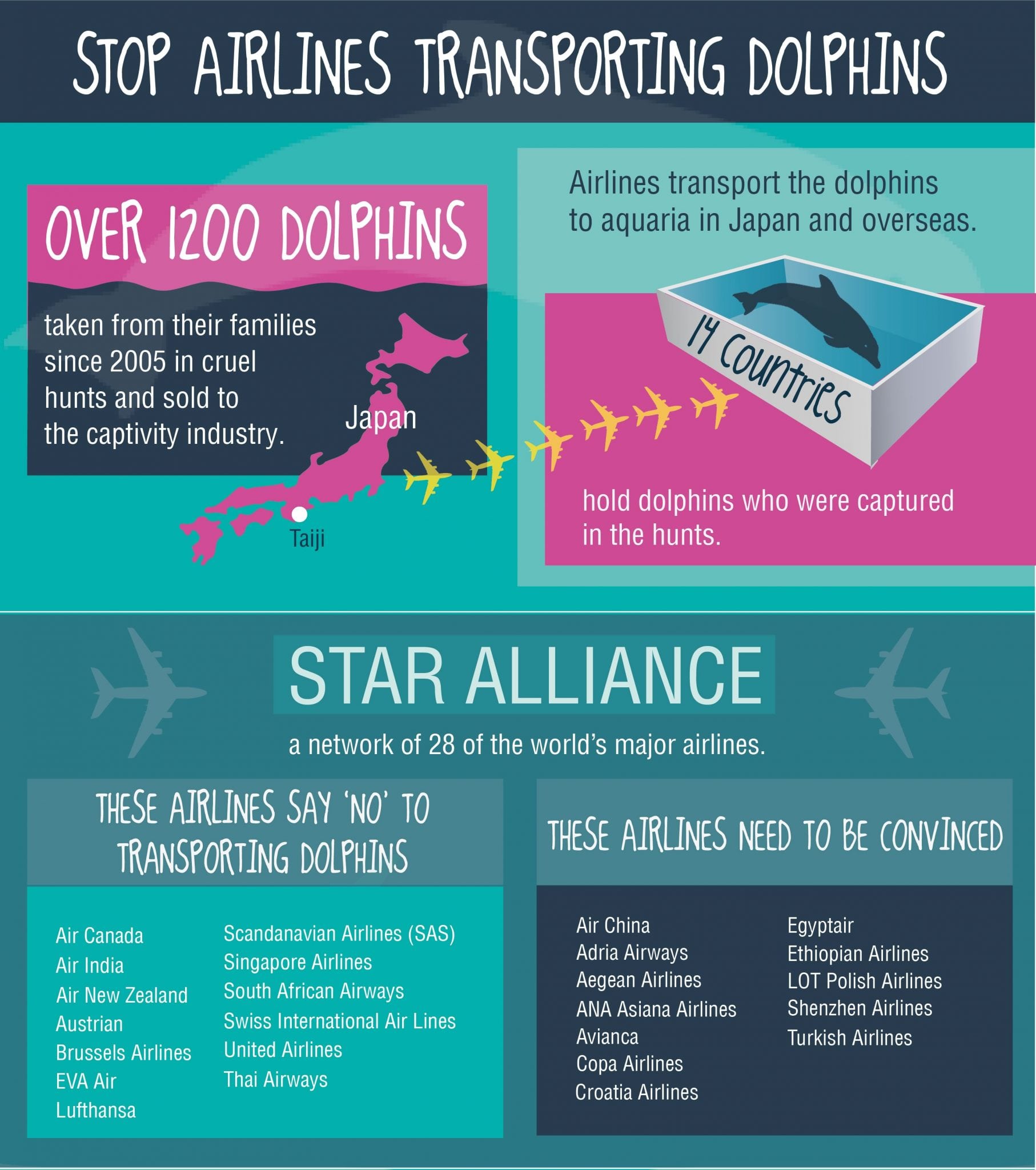 Posted in Blogs & Articles and tagged captivity, Dolphin hunts, Whaling
Preferences
We use cookies to help give you the best experience on our website and information about how you can support us.
Manage options Manage services Manage vendors Read more about these purposes
View preferences
{title} {title} {title}