For Southern Resident orcas, it all comes back to the salmon

Every summer since I became the Jessica Rekos Fellow for Orca Conservation at WDC, I’ve had the pleasure of traveling up to the San Juan Islands in Washington State to meet with orca researchers, conservationists, and advocates from all around the world.  WDC believes that we are stronger when we work together, and collaborates with responsible partners to work toward a world where every whale and dolphin is safe and free. 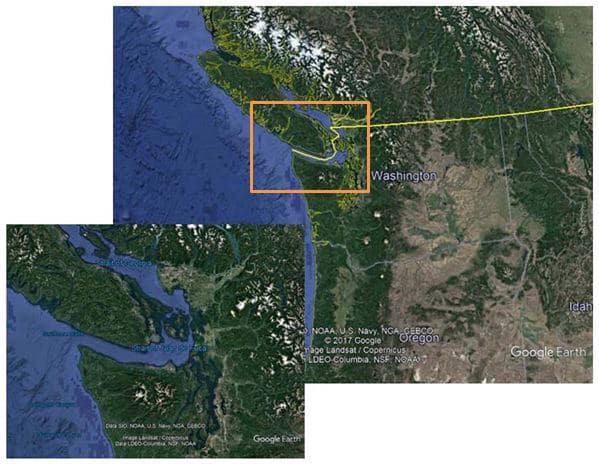 This summer was a bit different with the usual Superpod Symposium switching to a biennial schedule and not being held this year; instead, I had the opportunity to attend a workshop hosted by our collaborators at the Center for Whale Research (CWR) and their research partners from the UK (a team comprised of scientists from the Universities of Exeter and York).  Following the theme “Research. Action. Recovery,” discussion topics included the remarkably extensive Southern Resident database developed by CWR, current and future projects and studies, threats preventing the orcas from recovering, and the importance of policy and advocacy to help these endangered whales.  This workshop was the first of many meetings that happened this summer and fall focusing on the Southern Residents and the path forward for their recovery.

In the World of Whales

The primary focus of my work, and a top priority for WDC, is the recovery of the Southern Resident orca community, an endangered population that lives in the waters of the Pacific Northwest.  We use a variety of tools including campaigns, education and public outreach, expert comments to Federal agencies, work with regional and national elected officials, and collaborations with other conservation groups and researchers to advocate for stronger protections for these orcas and develop management initiatives.  But the best part of my job is getting to see the Southern Resident orcas in person and be reminded of exactly what we are fighting so hard to save, which is why I love going to visit the San Juan Islands during the summer.

Sometimes I’ve stumbled across the whales almost accidentally – while visiting Lime Kiln State Park (also known as Whale Watch Park, one of the best places in the world to see whales from shore – check out this video filmed from the shore of Lime Kiln by Darren Croft, a researcher from Exeter working with CWR), meeting with people on the West Side, or exploring the beautiful scenery in Eagle Cove.  The whales don’t follow our schedules, they’re concerned with their own lives and families, and seeing them sometimes takes us by surprise.  And of course, on the human side of these encounters, everyone drops what they’re doing as our attention is riveted to the water – you truly can’t take your eyes off of them.  Observers are drawn into their world, and an hour goes by in an instant. 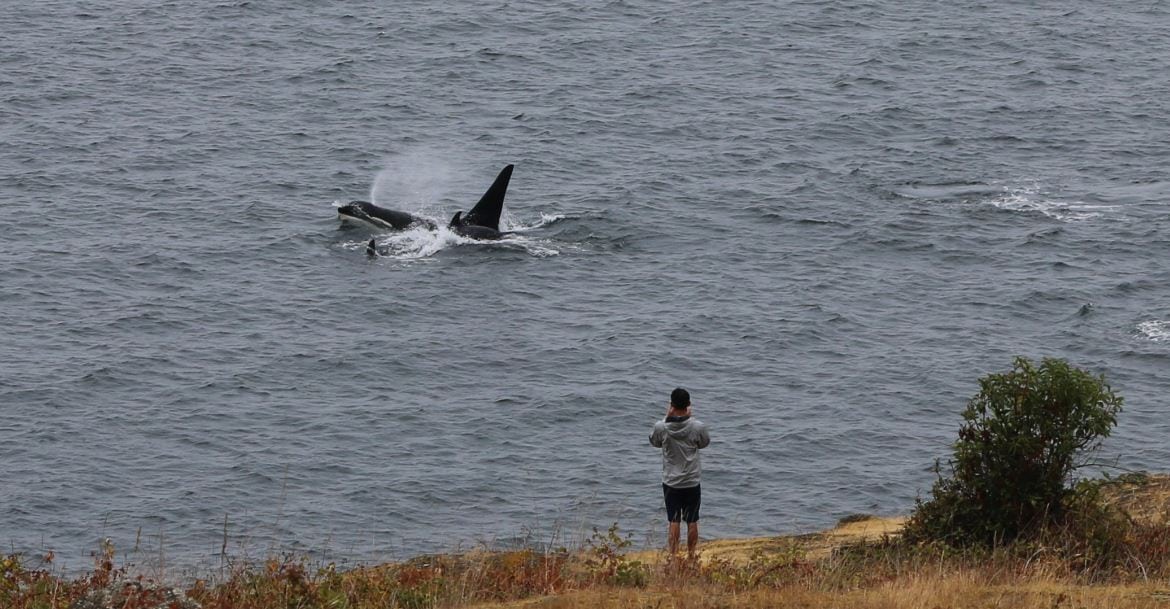 This summer, however, everyone was on extra-high alert for the word that the Southern Residents were headed our way, because this year they were a rare sight off San Juan Island.  In recent years, the Southern Residents are returning to this area, which they have historically used as summer feeding grounds, less and less.  They come here to forage on the summer runs of Chinook salmon that are gathering to return to the Fraser River watershed in Canada and other rivers in Puget Sound.  A 2016 study on their summer prey found that over 98% of the whales’ diet was salmon, and 79.5% was Chinook alone (Ford et al. 2016).  These whales are picky eaters, but with good reason.  Chinook are the largest and fattiest of salmon species, giving hungry whales the most return for their effort.  2017 was another summer of low Chinook returns to the Fraser River, and the Center for Whale Research had the lowest number of Southern Resident sightings on record, in over 40 years of collecting data.  The summers of 2013 and 2015 had similarly low numbers of sightings, and similarly low numbers of salmon.  The strong runs returning to the Fraser River in the spring, summer, and fall used to be a reliable summer buffet for the orcas, but those runs have been declining for decades, with a steep decline in the mid-90s – a time period coinciding with a notable decrease in both the Southern and Northern Resident orca populations.

Though it was held several months ago, CWR’s workshop highlighted the strange absence of the Southern Residents this summer, and was the first of several meetings this year to discuss the growing crisis looming over these iconic whales.  Those who work closely with the orcas have been sounding the alarm for over a decade, since before they were listed under the Endangered Species Act in 2005.  But now, as the whales have slipped to just 76 individuals in the wild – the lowest count in 30 years – Federal governments and action agencies, as well as local and regional governments, are recognizing the critical need for a targeted response.

Another meeting this fall, a Recovery Symposium hosted by Canada’s Department of Fisheries and Oceans (DFO), focused on sharing the most recent information on the orcas and threats between the United States and Canada, but unfortunately did not result in any concrete actions or emergency decisions.  However, it’s encouraging that these discussions are happening, and that DFO has committed to “making the tough decisions” to support Southern Resident recovery.  Although no direct actions were decided on at the Symposium, technical committees dedicated to reviewing the top three threats (prey depletion, toxins, and vessel effects) provided recommendations to DFO on specific steps to take.  High-level government officials were present and were willing to listen – something that unfortunately only seems to happen at or near emergency conditions. 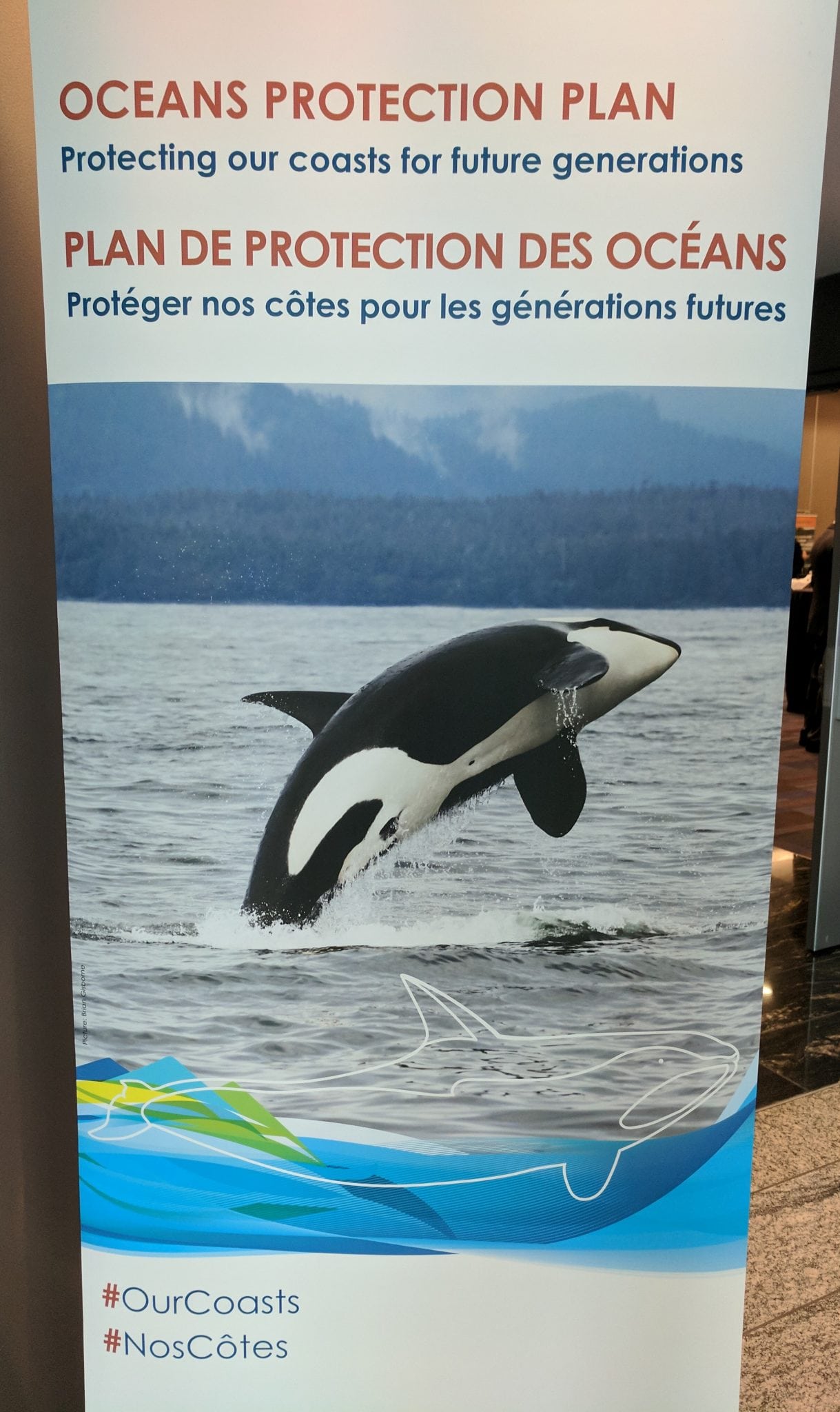 The Salish Sea, the Southern Residents, and the salmon they depend on are all transboundary between the United States and Canada – the threats are similarly international, as the solutions must be.  WDC encourages continued collaboration between DFO and its U.S. counterpart, the National Oceanic and Atmospheric Administration (NOAA) on efforts to protect and recover the Southern Residents, salmon, and their habitat.  WDC will continue to work hard to make sure that the meetings and conversations over the last several months result in quick actions to help the Southern Residents – including joining our partners in the Orca Salmon Alliance in calling for Washington Governor Inslee to convene and emergency response Task Force.  You can help our work by Adopting an Orca, subscribing to our blogs and newsletters, support while you shop, or make a donation.

Make sure to regularly check in our Don’t Let Orcas Be Dammed and MigrationNation pages to keep track of the latest Southern Resident and salmon news, and Action Alerts for how you can help!