After 4 full days of presentations and non-stop learning, Colleen and Monica are feeling the wear and tear of the conference. They only have one more day of the conference, followed by 2 days of workshops, so they are in the final stretch! They were able to celebrate as Monica gave an oral presentation today and Colleen completed her second poster session!

If you missed Day 3 updates, check them out here. 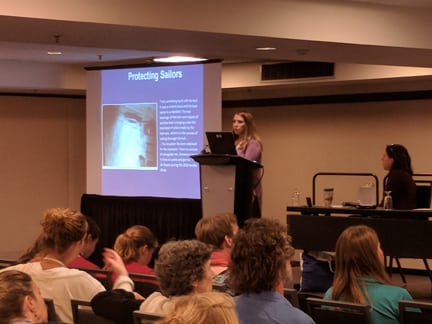 Today started with a few plenary speakers, all of whom were excellent, and then it was off to the races again for the concurrent sessions.  Conservation has been a hot topic at this conference, as is the need for communicating scientific information outside of the scientific community. I spent most of my day exploring those two topics before giving my presentation on our outreach program, Sharing the Seas.  Although it is mostly a science-focused conference, my fellow small group of outreach and education presenters were all really great and gave me some new ideas to work with moving forward.  I think my presentation went well and I received positive feedback afterwards. I’m estimating that there were about 75 people in the room- some familiar faces and a lot of new ones.  Colleen told me the Society for Marine Mammalogy’s President was there to check it out too! He was one of many who throughout the week has voiced the importance of increased education.

I now have 21 pages of notes to sort through in my notebook, in addition to other random scribbles throughout the conference agenda book.  Instead of sharing fun facts with you all in this update, I wanted to share two pretty impactful quotes I heard today:

Colleen and I celebrated a successful day with some local grub (my first time having poutine!!), cheers at a Scottish pub, and delicious desserts before calling it a night. Only one more day left of the conference and then we have two days of workshops over the weekend, so many more updates still to follow! -Monica 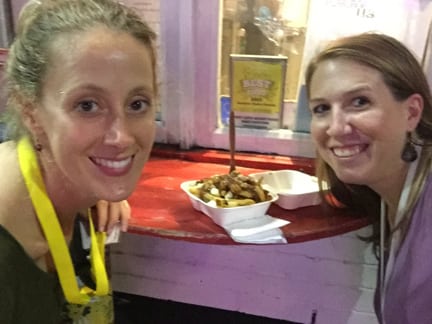 I can’t believe we only have one day left of the conference!  In a way, it feels like this craziness is the new normal and that we’ve been here forever, but I can’t believe how quickly four days went by.  Monica did a stellar job in her presentation today on WDC’s outreach program to help sailors avoid collisions with whales – she had a full room and generated a lot of excitement about this awesome project that helps keeps whales and sailors safe.  I had a second poster session, and the theme of today was “dams!” Most of the people who came by my poster today were blown away by the idea of removing dams to restore rivers, rebuild salmon populations, and provide food for the endangered Southern Resident orcas.  It may seem like a crazy idea, but taking down outdated dams and letting rivers rebound to a more natural state actually has a pretty strong precedent in the Pacific Northwest and the rest of the U.S.  And as we’ve seen with other dam removals in the region, it works – take down a dam, the salmon come back.  But that was just one part of my day.  We had a couple more plenary talks today, including one from friend-of-WDC Hal Whitehead on the co-evolution of culture and genes in whales and dolphins.  Orcas are a perfect example of this, as many scientists speculate that the division of orcas into different ecotypes started with their behavior, which was passed down through vertical learning (from mother to offspring) and influenced the genetics of these different orcas.  For example, in the Eastern North Pacific, we have three ecotypes – Residents (fish-eaters), Bigg’s (mammal-eaters), and the rarely seen Offshore orcas (shark- and fish-eaters).  These different types of orca are genetically unique, and differ in diets, culture, behavior, acoustic use, and even appearance.  I spent a lot of my day in the “Health” session, learning about the different ways we can track both the individual health and population health of marine mammals. Through established and innovative techniques, we can see what factors change the health of whales and dolphins, which can help us mitigate threats and increase protections for vulnerable populations.

Here’s a health snapshot of marine mammals for you:

Catch up with the rest of the Blogging from Biennial series.