The Center for Whale Research (CWR) made the sad determination yesterday that 2-year old Sonic (J52) is now deceased.  This is the second death for the critically endangered Southern Resident orca population this year, after a summer in which they were barely seen in their usual summer habitat.  This unique and fragile population now has just 76 individual orcas, the lowest number since 1984 (the population totals 77 including Lolita/Tokitae, still held captive at the Miami Seaquarium).

Sonic is one of the so-called “baby boom” calves born between December 2014 and January 2016, when 11 known orcas were born in the population.  Two of those orcas were never seen alive, so don’t have the official alpha-numeric designation given to the Southern Residents.  J55 disappeared after only a month.  J54 (Dipper) died last fall shortly after his mother, J28 (Polaris), did.  Six of those orca babies are still alive: Scarlet (J50), Nova (J51), Kiki (J53), Windsong (L121), Magic (L122), and Lazuli (L123). Sonic was last seen by CWR with his mother, Alki (J36) and an L pod male, Mystery (L85) on September 15th, separate from the other members of J and L pod who were in the area.  CWR observed that the young orca seemed lethargic, and the two adults were very attentive to him.  Sonic was not with his family the next time his mother and J pod were sighted on September 19th.

Although we call this cohort of orcas the “baby boom,” eleven calves over almost two years should be normal circumstances for the population – if the orcas were healthy and the population recovering.  But the combined effects of a lack of salmon, toxins in the water, and impacts from vessel traffic have brought the Southern Residents to the edge of extinction.  A recent study (Wasser et al. 2017) found that nearly 70% of detected pregnancies in the population failed due to nutritional stress. 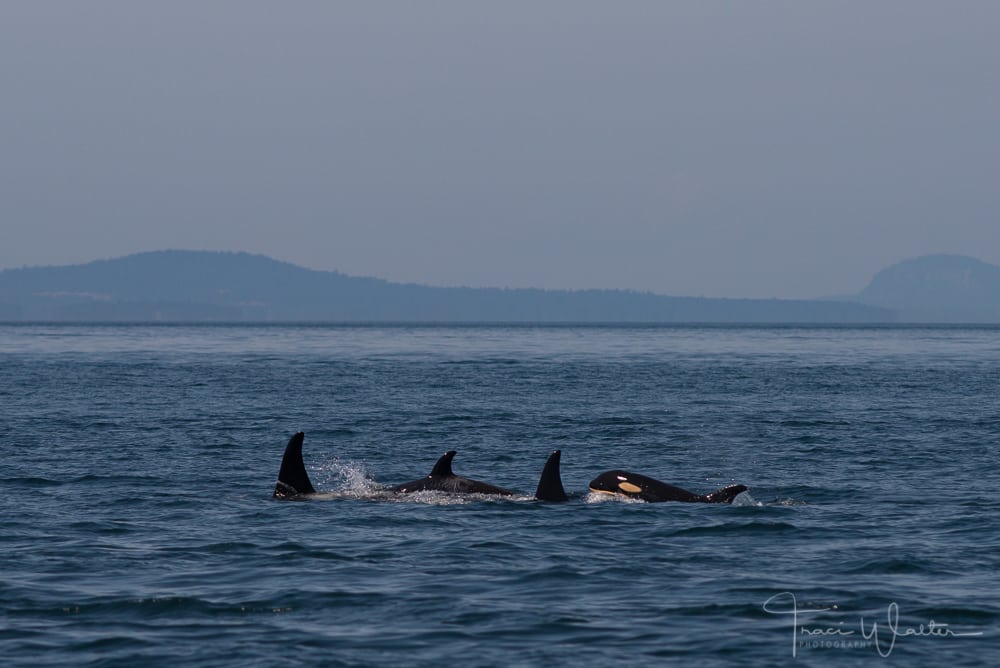 In a statement from the Center for Whale Research, which has been studying the Southern Residents for over 40 years, Senior Scientist Ken Balcomb notes that “in the early years of our study, the average calving interval (live birth)… was calculated to be 5.2 years, with a 3 year interval observed for some females.  The abort/neonate mortality was estimated at 42% of conceptions.  The average calving interval (live birth) is now 9+ years, and the abort/neonate mortality is estimated to be 75% or more.”  The Southern Residents are having fewer calves, less often, and they are now less likely to survive.

For babies like Sonic, the first known offspring of Alki (J36), life can be especially hard.  The Southern Residents are considered one of the most contaminated whale populations on the planet (Alava et al. 2012), with high concentrations of toxins like DDT, PCBs, and PBDEs.  Mothers metabolize these toxins and pass them on to their offspring through gestation and lactation; first-born calves receive an especially high dose of this chemical cocktail since their mothers have no way to get rid of the toxins until their first pregnancy (Lundin et al. 2016, Krahn et al. 2009, Ross et al. 2000).

Sonic was born in March of 2015.  He was recently observed emaciated and in poor condition by the Northwest Fisheries Science Center in their ongoing drone study of orcas in the North Pacific.  J pod and the entire Southern Resident community have been noticeably absent from their usual summer foraging grounds this year, with very few salmon returning to the Fraser River.

This heartbreaking loss is the latest in a very sad couple of years for the Southern Resident community, including the death of matriarch Granny last winter.  WDC and our partners in the Northwest are working hard on recovery efforts for these orcas, including dam removal and river restoration to support salmon populations, but we can’t do it alone – find out how you can help.

Posted in Blogs & Articles and tagged Dam, Orca, orca salmon alliance, salmon, Southern Residents
Preferences
We use cookies to help give you the best experience on our website and information about how you can support us.
Manage options Manage services Manage vendors Read more about these purposes
View preferences
{title} {title} {title}