WDC met with Fisheries Minister, George Eustice today to hand over 76,000 signatures from members of the public who joined WDC’s campaign asking for strong laws to protect dolphins, whales and porpoises from death and injury in fishing gear (bycatch) in UK seas.

The campaign highlights the fact that thousands of dolphins, porpoises and whales die in fishing gear every year in the waters around the UK. Whales and dolphins can’t breathe underwater and, when trapped in a net they will panic, and can endure terrible wounds and broken bones as they try to escape. When they can’t struggle any more, they will close their blowhole and suffocate.

‘We wanted to use this campaign to draw the UK government’s attention to the ongoing level of bycatch in UK waters and the very real and terrible effect it is having on these amazing marine creatures, said WDC campaign lead, Sarah Dolman. ‘Most of the protection porpoises and dolphins have comes from the European Union. These are known to be flawed, but offer some protection at least, it’s currently very unclear what laws we will have and whether these will adequately protect them after Brexit.

The latest report released by Defra (Department for Environment, Food and Rural Affairs) estimates that 285 common dolphins were caught in static UK gillnets alone in 2016. In addition, about 1200-1482 porpoises were reported caught in UK gillnet fisheries, depending on whether pingers (acoustic devices attached to nets to drive marine mammals away) were in use.

As data is limited, including on other sections of the fleet such as some types of trawlers, there is a lack of confidence in the real numbers of deaths. In particular, the number of stranded common dolphins alone indicates real numbers of dolphins dying at sea, in the south west of the UK and wider area each year are likely to be very high. Dolphins are also caught in the nets of other nation’s vessels fishing in and around UK waters, for which data is patchy at best.

WDC’s 76,000 signature petition on the Care2 website was presented to George Eustice at the House of Commons at an event where the Minister also spoke. 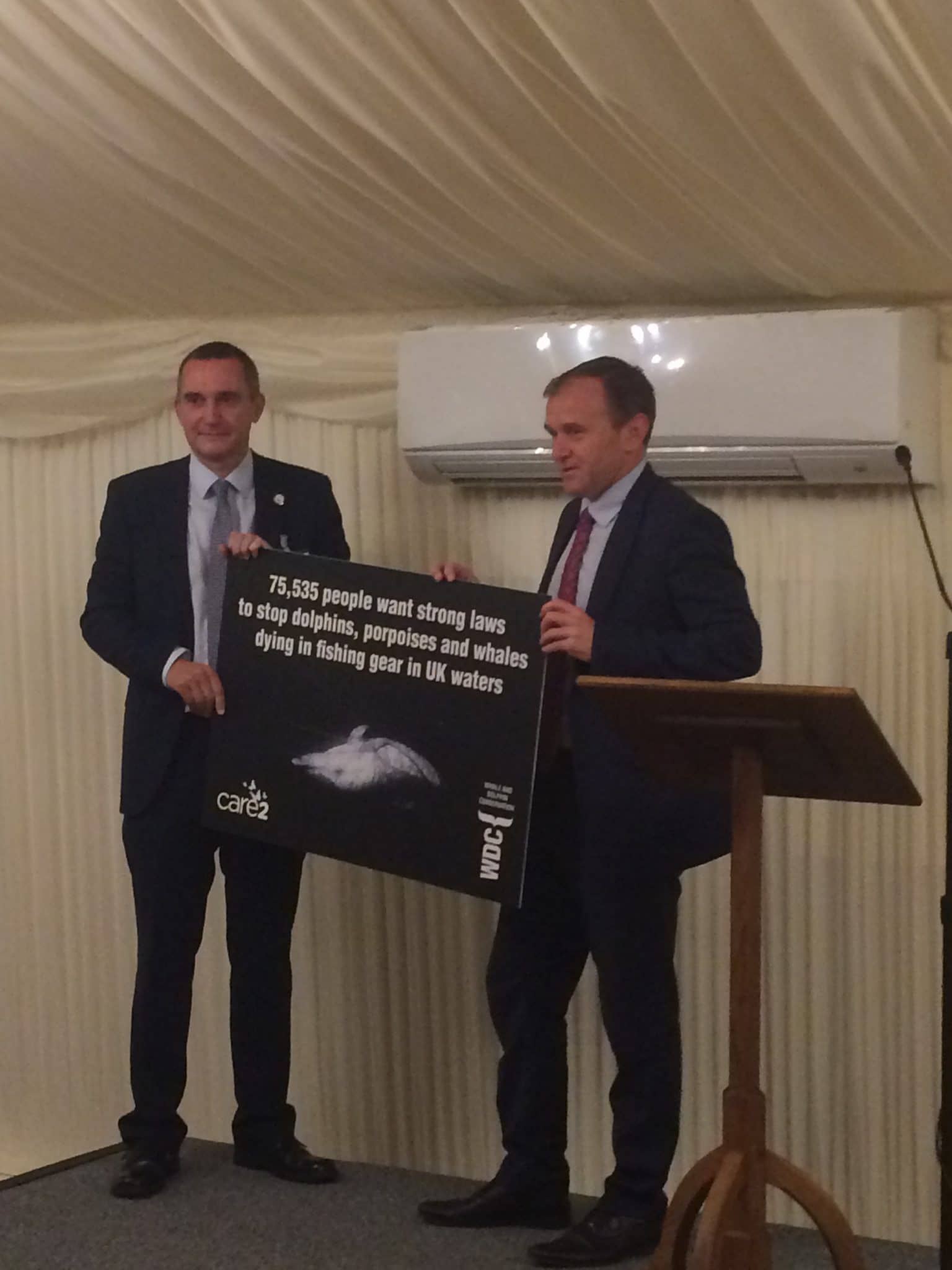 ‘I want us to be doing more to prevent bycatch, said the Minister. We will be a champion for the welfare of whales and dolphins.’

He also announced intention to bring together stakeholders to put together a bycatch strategy to agree solutions to reduce bycatch.

‘The UK does more than other EU Member States in terms of meeting its obligations to monitor and help prevent these deaths in fishing nets but experts have recognised that the EU law is not working well and the UK can and must do much better, WDC’s Sarah Dolman continues. ‘Now is the time to implement laws to reduce levels of bycatch and to stop this suffering and we will only do so by working with governments, the fishing industry, individual fishermen, coastal communities, the technology industry and with supporters and members of the public.