I’m delighted to introduce our third guest blog from supporter, Oliver Dirr, who has been travelling round the world, watching whales and sharing his best experiences with us! Read on for his account of the ten things he and his wife learned on their trip to Greenland.

Greenland is a fantastic place for whale watching. It’s not only the giant icebergs that make whale watching in Greenland so special and surreal, it’s also the whale watching that’s quite different here. In summer, you’ll likely meet humpbacks, minkes and fin whales and occasionally even sperm whales, orcas or blue whales might show up. We travelled to Ilulissat and Qeqertarsuaq, two small settlements around Disco Bay in the western part of Greenland where we were absolutely stunned, both by the whales and the scenery. Here are some thoughts and impressions. 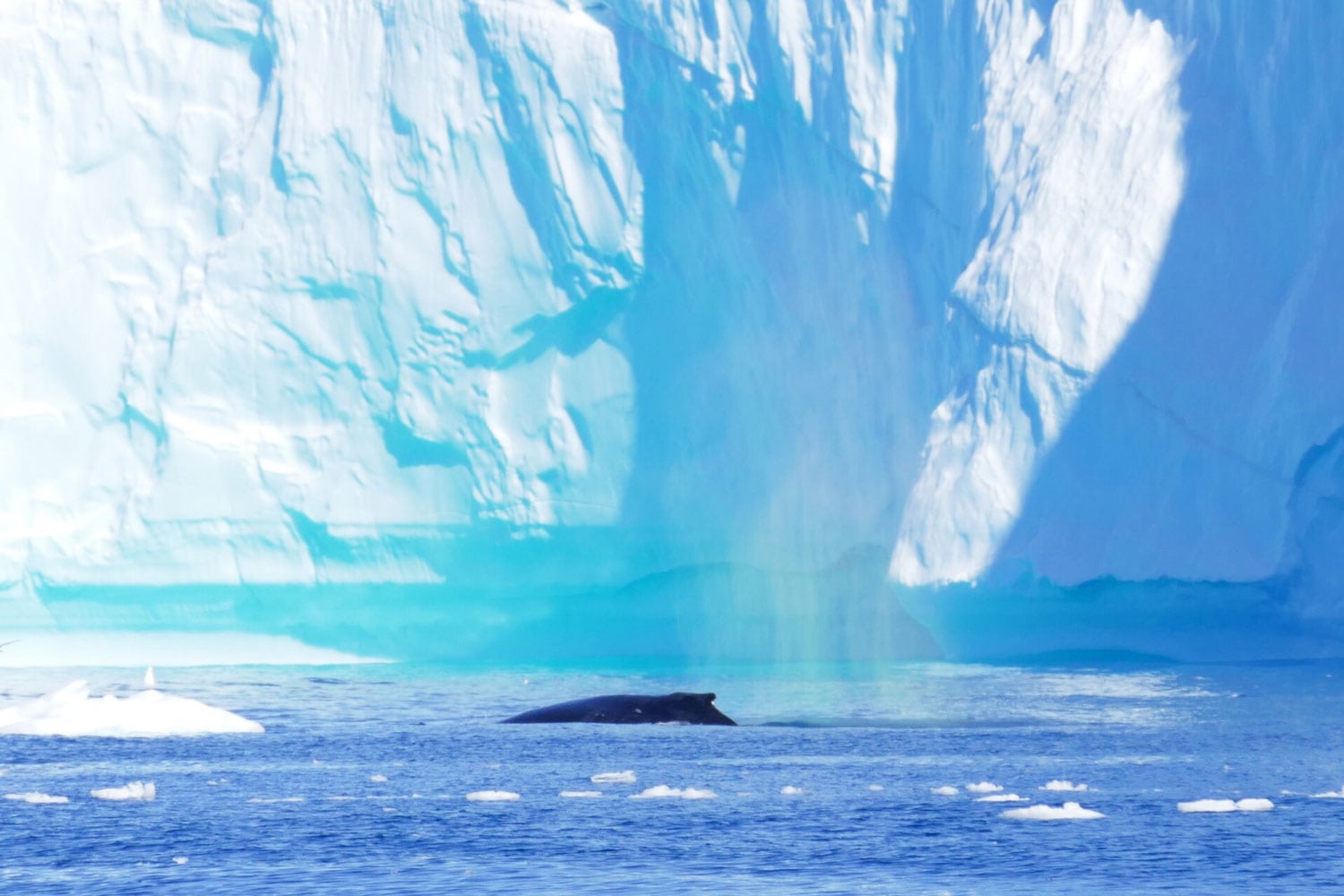 We’ve seen whales every day. Mostly, it’s been humpbacks and mostly they were busy feeding around the giant icebergs. They always stayed quite close to the ice. What we’ve learned: the glacier ice flowing into the open the sea is full of dust, dirt and soil (nutrients!) and therefore, the icy waters are full of plankton, krill and fish. So, the Greenlandic sea is full of life, all the way up and down the food chain. The perfect summer feast for migrating and ever-hungry humpbacks! 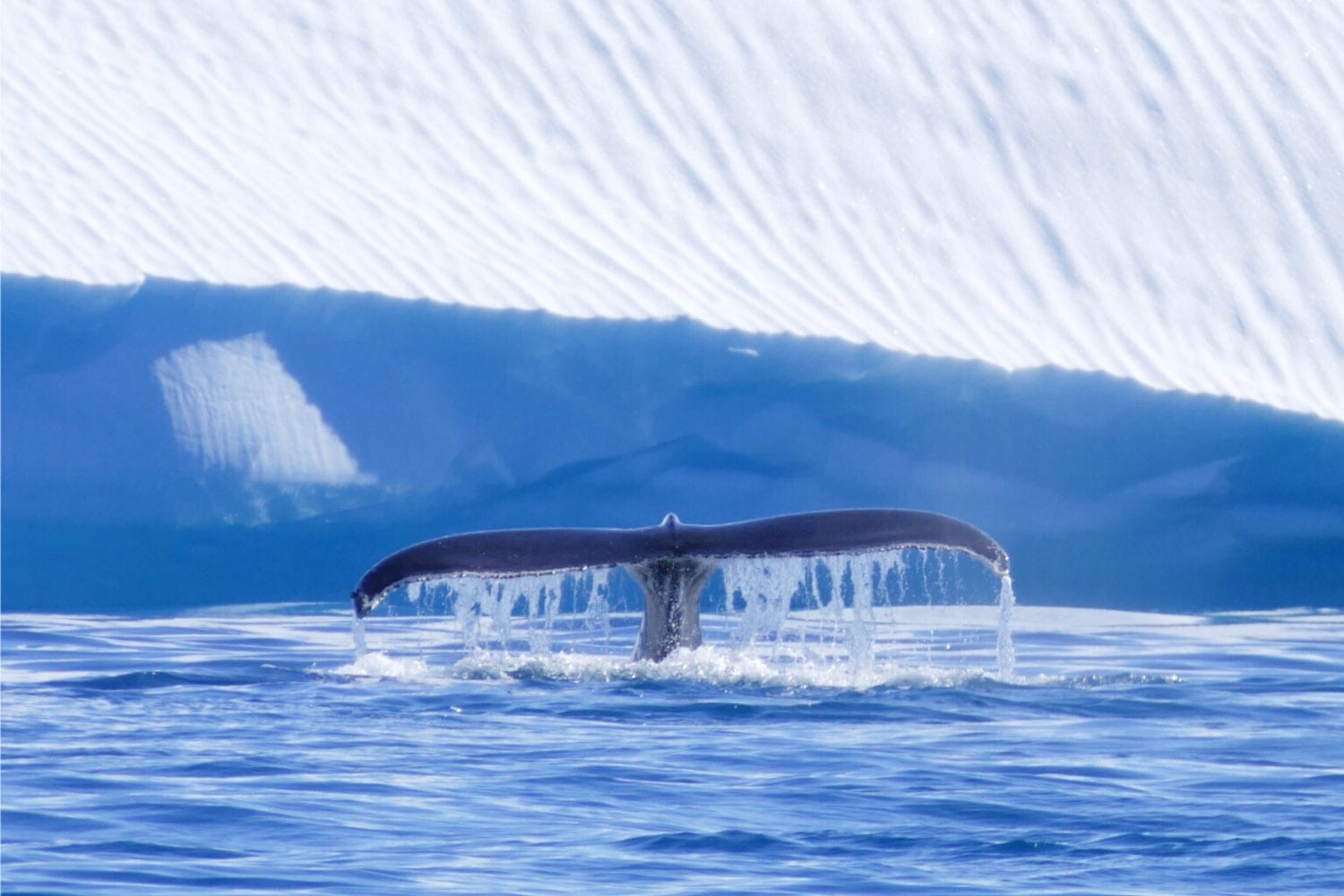 #2 The whales are not the main attraction

Whale watching in Greenland is different. In most countries, you’ll find highly-specialized operators, providing special suits, complementary information and on-board biologists. In Greenland, boat trips tend to focus on taking tourists to to see the icebergs – and while watching the ice, we automatically met the whales. We’ve learned a lot about glaciers, icebergs and climate change – and the whales got a bit neglected. They were more incidental, rather than the main attraction. Strange, but true. 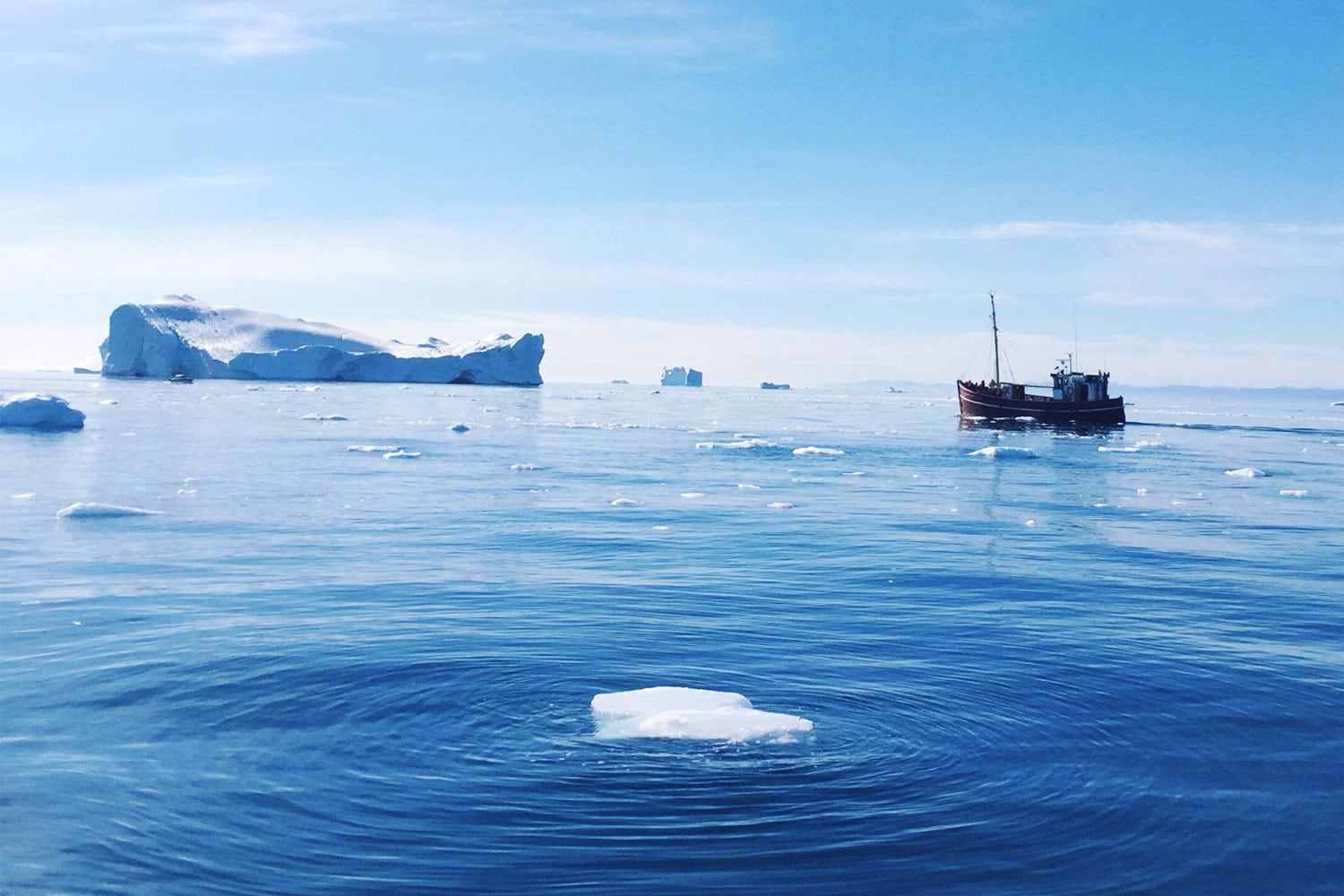 #3 How to deal with the Inuit hunting and eating whales?

If our guide was Inuit, it was quite likely that he sooner or later told us how tasty and delicious whales are – especially narwhals. So, how to deal with that as a whale lover and whale watching enthusiast? We had some discussions about that. Yes, Inuit hunt whales for nutritional and cultural reasons. They always did and they still do. And being an average European tourist you certainly don’t want to go to Greenland and tell some Inuit what’s okay and what’s not. Fair enough. But why is it that they offer whale meat to tourists in some Greenlandic supermarkets and many restaurants? This ain’t about culture, this is purely a commercial thing – a tourist thing. And we definitely had no discussions about that. So, whenever we found whale meat on a menu, we decided to vote with our feet and simply go to another restaurant. And whenever we were told how delicious narwhal is, we gently replied with how happy we are to meet these wonderful creatures alive. 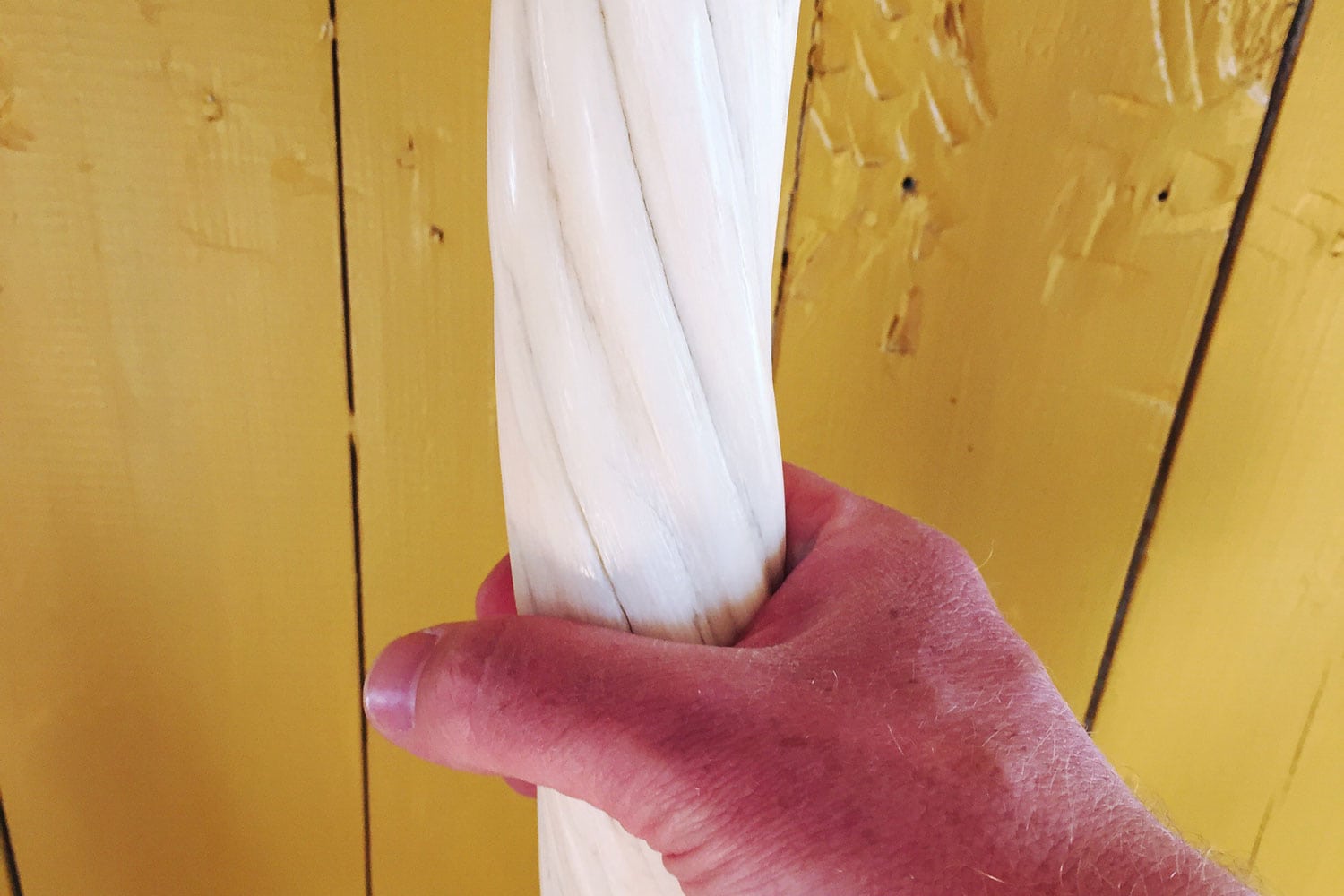 #4 When and where to meet the ‘unicorns of the sea’

Speaking of narwhals, Greenland obviously is also home to the arctic whales such as narwhals, belugas and bowheads. However, to meet these guys during summer, you’ll have to make it all the way up north, straight to the ice edge, and this might be more like an arctic expedition than a regular holiday trip. In Qeqertarsuaq, we’ve been told that narwhals and bowheads are around in early spring. The picture above is the closest we could get to a narwhal: a male’s tusk, two metres long. Impressive! We just found it standing around at one of the house walls in Qeqertarsuaq. 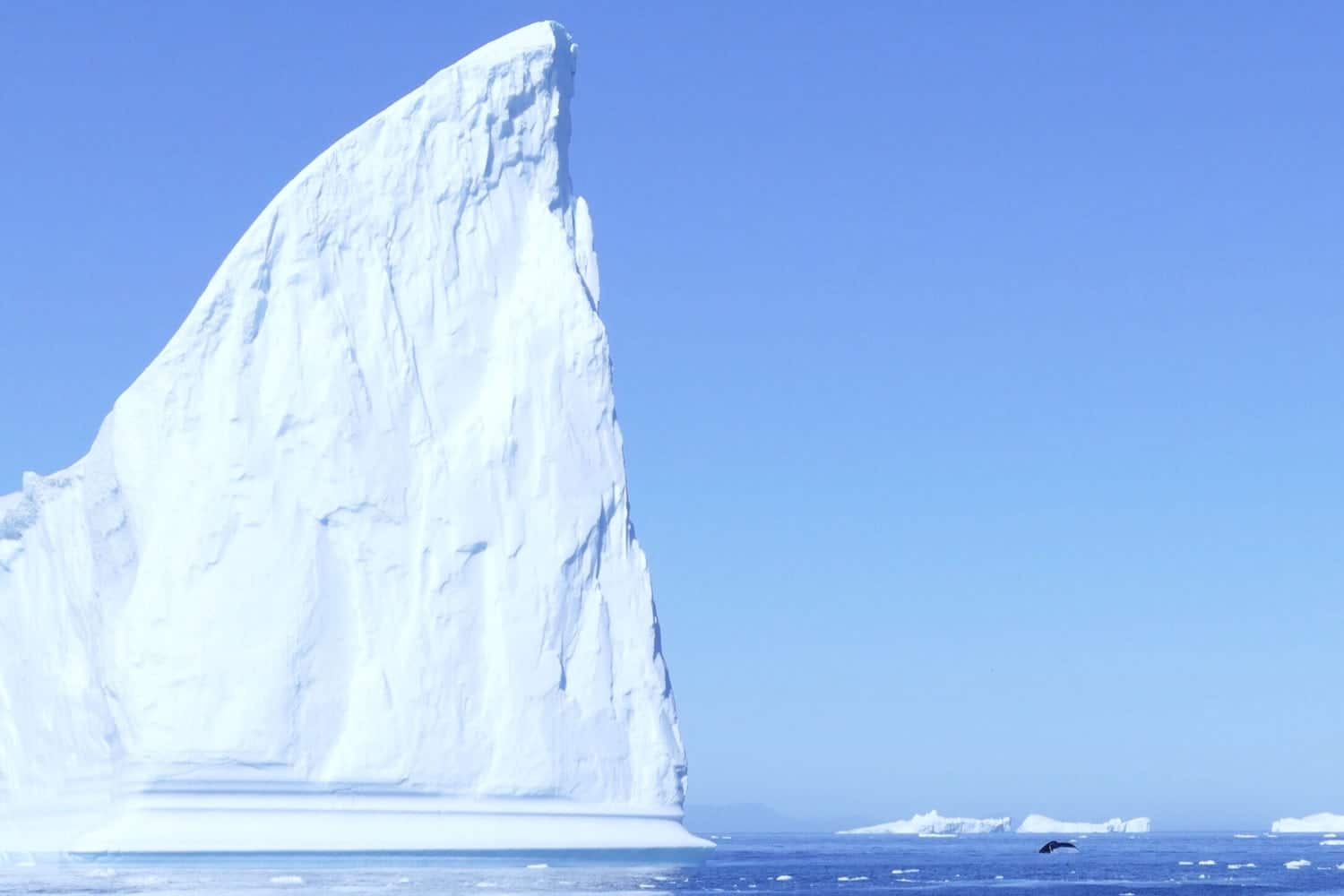 #5 It’s all just a matter of scale

Sitting in a regular-sized boat, I always feel very small when a whale shows up. They are the true giants. But that’s another thing which is totally different in Greenland: next to such a giant iceberg even a blue whale – the biggest animal to have ever lived on this planet – is nothing more than a tiny little spot in the ocean. You have to look very closely to find the humpback fluke on the right side of the picture above. But yes, there’s one! In Greenland, it’s the icebergs which are the giants rather than the whales. It’s all just a matter of scale. 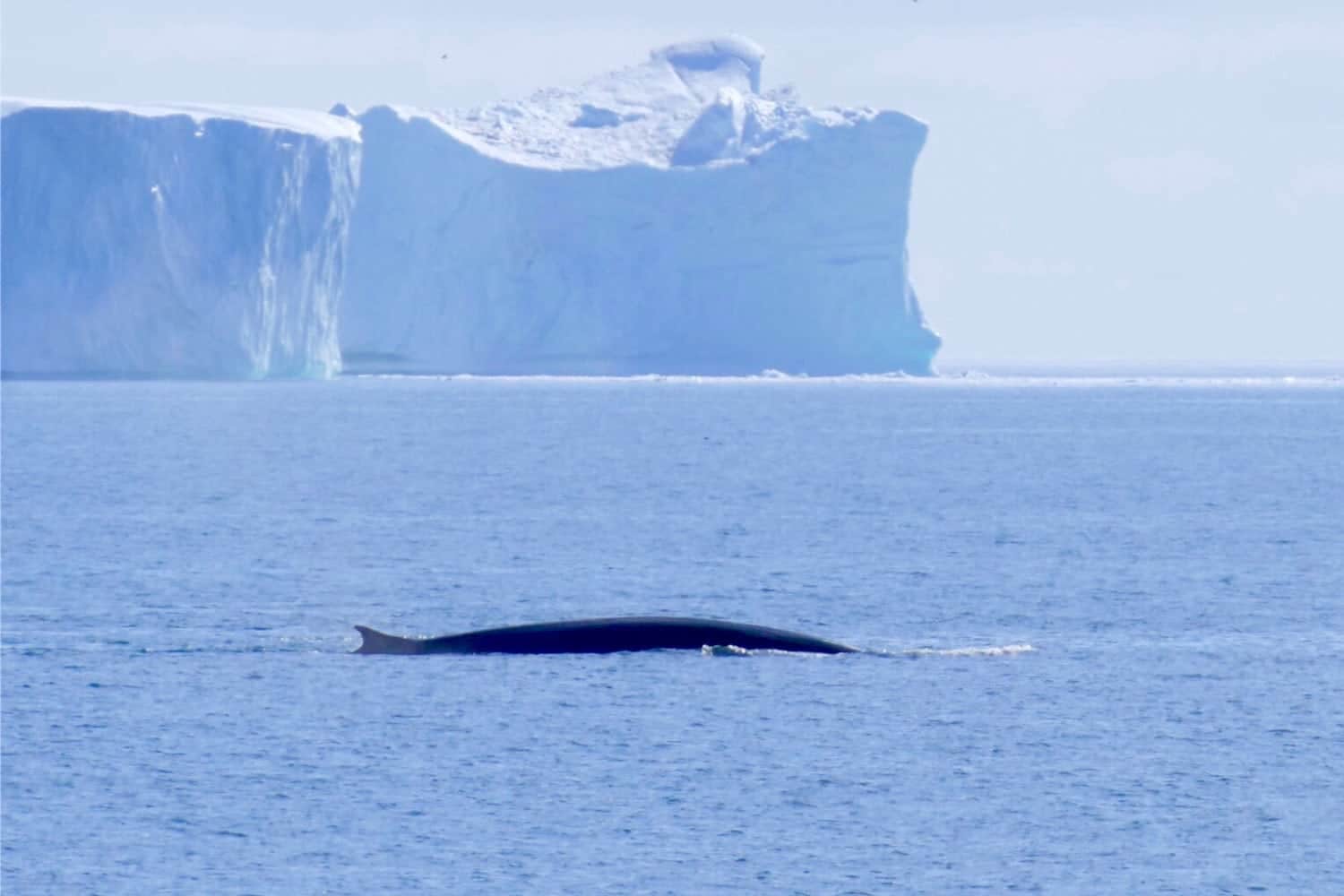 #6 When you can see fin whales even from the beach

By boat off Ilulissat, it literally takes only a few minutes to encounter whales between the icebergs. However, one day, a guide told us that Qeqertarsuaq, on the other side of Disco Bay, might be of even greater interest to us. He said there were usually a lot of fin whales around, often traveling so close to the coast that you could see them from the beach. So, the next day, we took a ferry, keen to give Qeqertarsuaq a try. After a short walk on the beach, we spotted a group of fin whales calmly traveling along. The picture above was taken right from the beach. 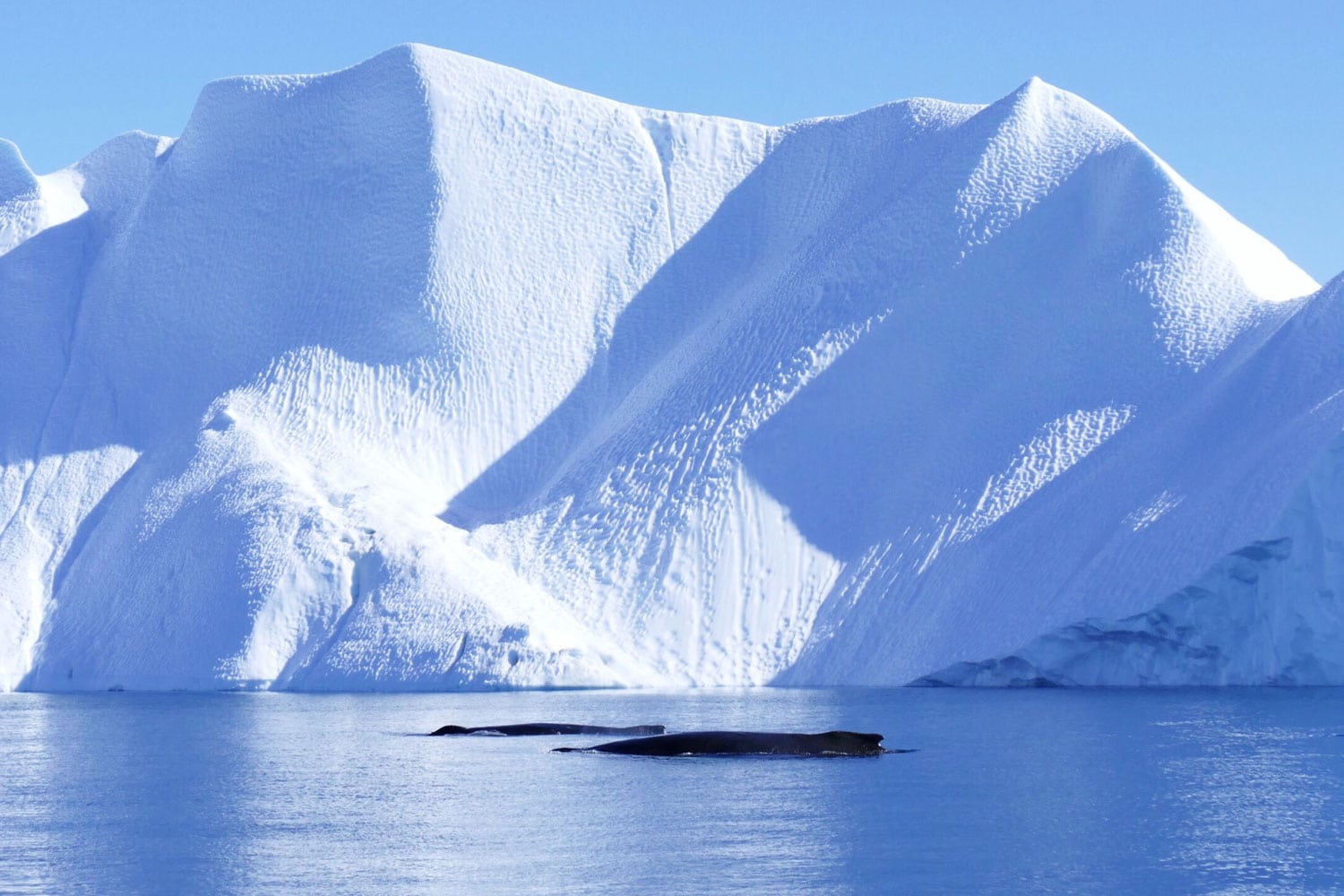 #7 Tourists that can tell a fin whale from a humpback

Later that day, an elderly Inuit invited us on a little cruise in his boat. As we went aboard, we told him that we’d already seen some fin whales from the beach. He was absolutely thrilled – not by the fin whales but by some tourists being able to tell a fin whale from a humpback. He really loved it! So we told him about our whole whale trip around the world. Now, however, he became perplexed. So much excitement about such an everyday thing as a whale seemed to him to be taking things a little too far. Crazy tourists! 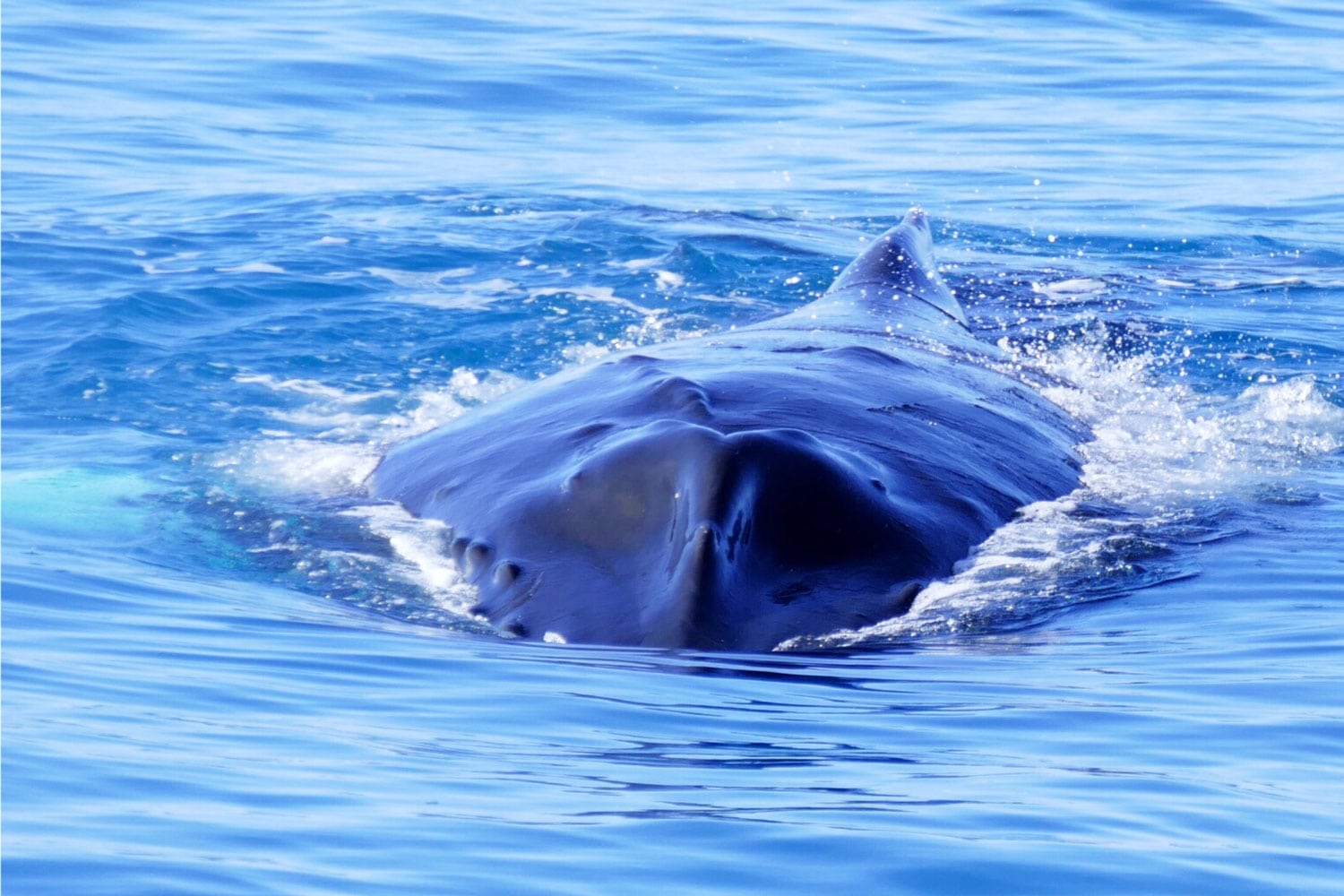 #8 You have to trust the whales – and the locals

As I already mentioned, our new friend’s boat was pretty small. Maybe room for four, but no more. Later, two humpbacks came really close to our boat. Really, really close. So, I told him how much it worries me when a humpback comes close to such a small boat, because humpbacks love to breach! And being accidentally flattened by a 30 ton breaching humpback would probably be the end of any holiday trip. But when I told him about my worries, he just laughed aloud. Then he told us that he’s feeling exactly the same. And that we had to trust the humpbacks. They knew what they do. So, I tried to trust the humpbacks. And the old Inuit. He knows. 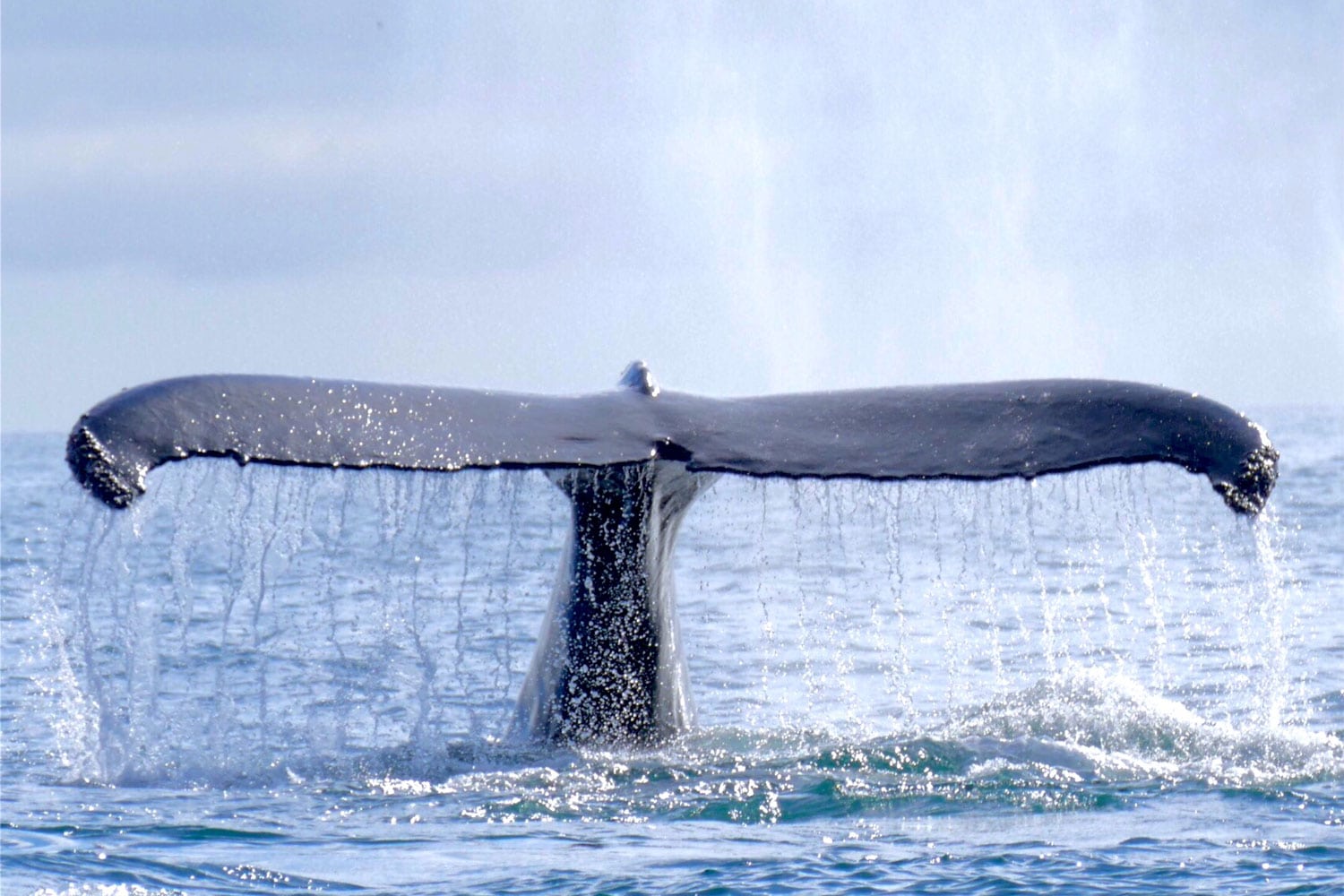 #9 High Five with a humpback. Almost.

Luckily, the humpbacks didn’t breach at all that day. But they went for a dive so close to our boat that I could almost have given them a high five. I’ve never seen a fluke so close, only a few metres away. Surreal. Remarkable. Beautiful. 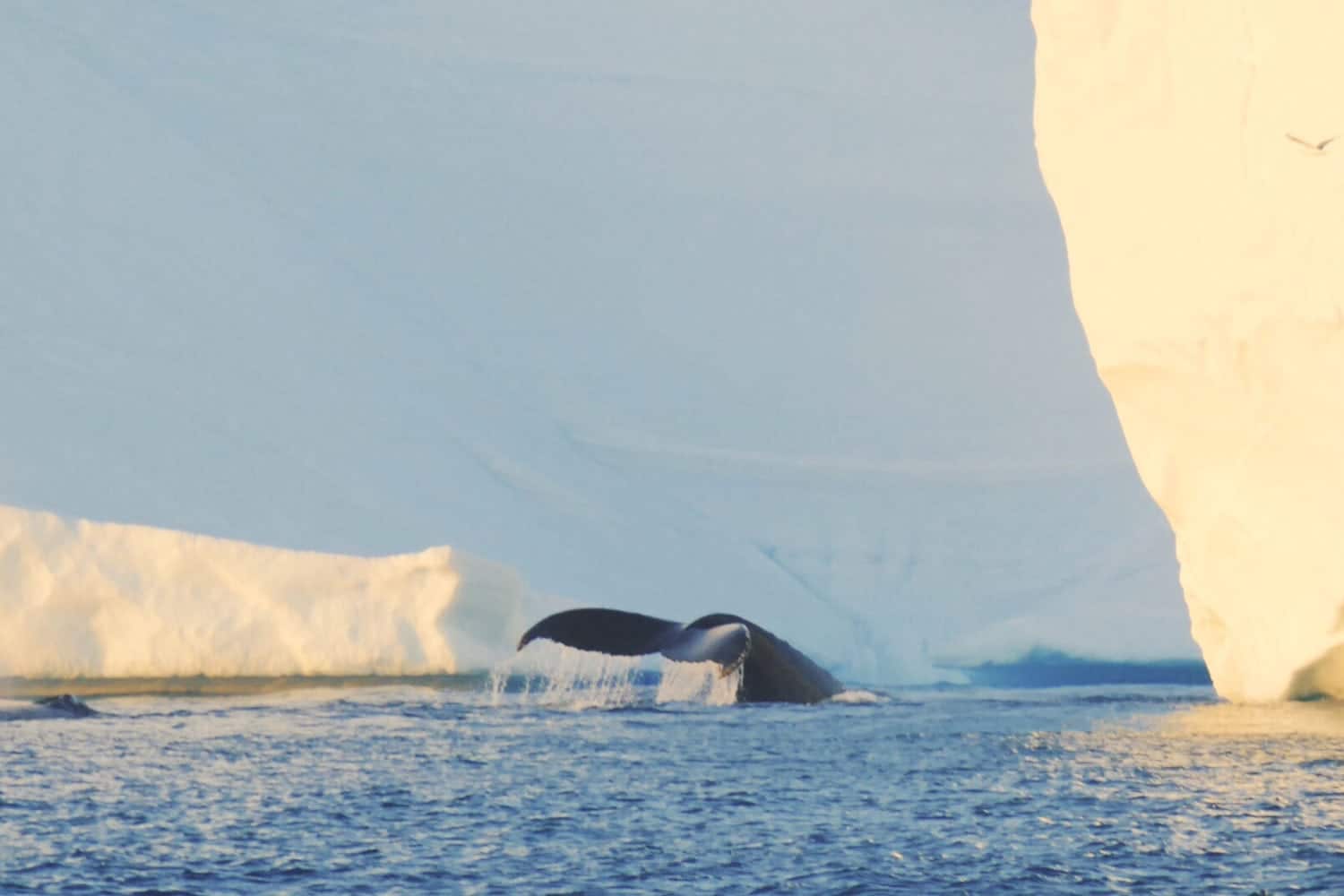 Ilulissat is located 300 kilometres above the Arctic Circle. During the summer, the sun never sets. This means you can watch icebergs AND whales 24 hours a day. How beautiful is that? There’s certainly few sights more beautiful and graceful than a whale showing its fluke before diving. But – a whale showing its fluke, in front of an iceberg, during the midnight sun … I really have no idea how to beat that as an experience!

Our visit to Disco Bay was part of a two week trip to Greenland including some days spent hiking on the endless ice shield. To read the full story and find even more pictures from Greenland please have a look at whaletrips.org/greenland

Our plan was to meet the whales for a couple of months, meanwhile, travelling west until we arrived back home.  Following that trip, we built a website called whaletrips.org, featuring our favourite whales, some of the most beautiful places to see them and explaining what we’ve learned about whales and whale watching. We’re  delighted to be posting some of our adventures on the WDC website.

If you’ve been inspired by Oliver’s blog and are considering taking a whale watching holiday, please check out WDC partners Off the Map Travel www.offthemaptravel.co.uk

Posted in Blogs & Articles and tagged Whale watching
Preferences
We use cookies to help give you the best experience on our website and information about how you can support us.
Manage options Manage services Manage vendors Read more about these purposes
View preferences
{title} {title} {title}