Researchers from Murdoch University working off the coast of Western Australia have been analysing how and why dolphins shake and throw some prey before eating it.

In the case of octopus, the study revealed that the technique used by the dolphins swimming off the Bunbury coast can be adopted for any dangerous meal.

The dolphins have worked out that if they eat an octopus alive, the suckers on its leg could stick to their throats and cause the dolphin to choke and die.

So, just like humans, the dolphins will make sure the octopus is dead before consuming it. The dolphins observed by the research team were seen shaking the octopus until its head falls off and it is left in pieces.

Researchers witnessed 33 events in which the dolphins used either of two techniques to stop the octopus wriggling before eating it. In one technique, a dolphin held an octopus in its mouth and shook it. The dolphin then slammed its prey into the water’s surface until the meal was in pieces. Another method involved repeatedly flinging the octopus into the air until it was ready to eat. 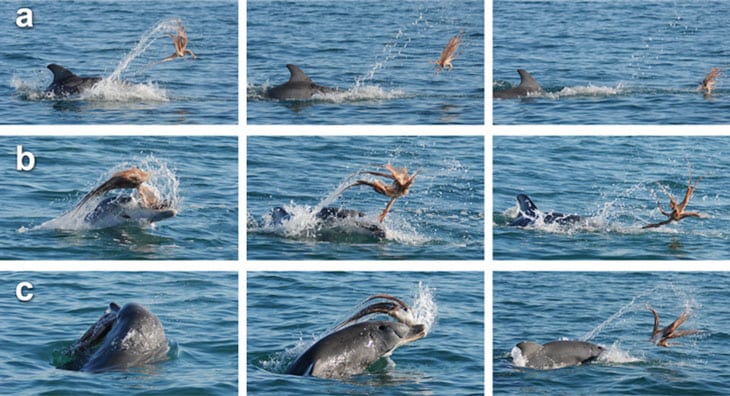 Discover how clever whales and dolphins are.

Posted in News and tagged Ethics and Rights