Each spring, summer, and fall hundreds of protected humpback whales come to the waters off of southern New England to feed. However, these whales share their feeding habitat with both recreational and commercial boaters, and as a result, are at a high risk of being struck by a passing vessel.

In a new study published in Marine Mammal Science, Vessel collision injuries on live humpback whales, Megaptera novaeangliae, in the southern Gulf of Maine, the authors reviewed over 200,000 photos of 624 individual humpbacks taken over a nine-year period. They evaluated the proportion of humpback whales bearing injuries consistent with sharp force trauma, such as injuries resulting from propellers. The images showed that almost 15% of those humpbacks had injuries or scarring consistent with one or more vessel strikes. The study’s primary author, Alex Hill, supervisor of the project for Whale and Dolphin Conservation (WDC), said, “Sadly, this study underestimates the actual number of whales involved in vessel strikes as we could not account for impacts from blunt-force trauma or cases where whales died as a result of the strike”. 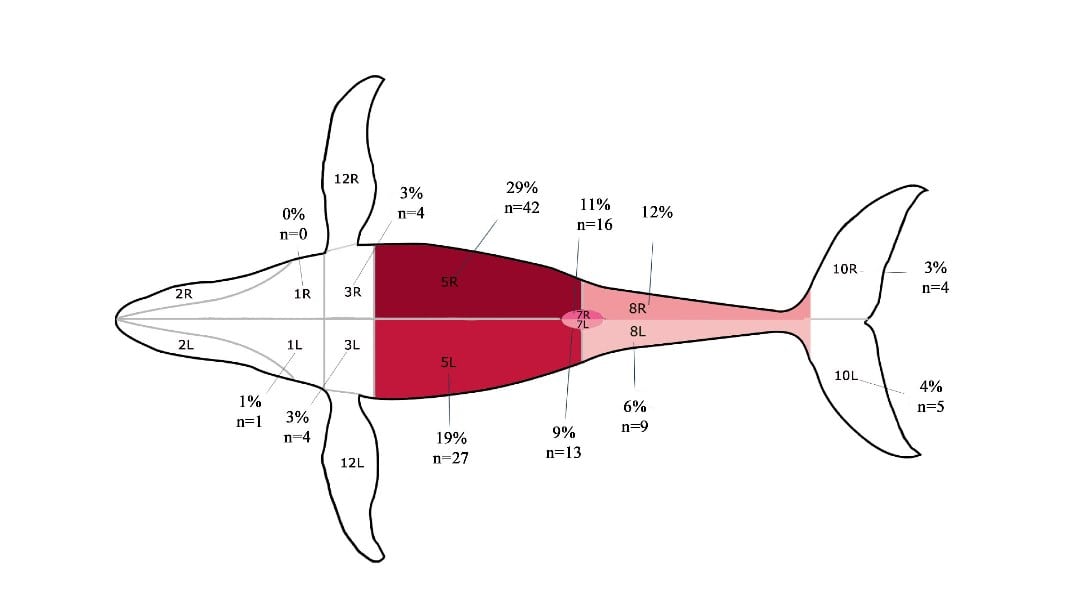 Hill went on to explain that blunt-force trauma, which can result from the vessel hitting a whale, may not leave a discernible injury, and even in cases where a wound is detectable, it is not always possible to know if it is from the same event as whales can be struck multiple times.

While NOAA’s National Marine Fisheries Service has issued guidelines for vessels engaged in whale watching, there are currently no regulations or guidelines specifically devised to reduce the likelihood of collisions for transiting vessels.

Regina Asmutis-Silvia, co-author of the study and Executive Director at WDC, notes, “We are using our findings to support the need for the development of operational guidelines applicable to all vessels transiting in the vicinity of whales. We already educate recreational boaters of this very real threat through two outreach projects, See a Spout and Sharing the Seas.”

While not part of this study, WDC noted that boaters colliding with whales are not only of concern for the whales, but also for the vessels and their passengers.  Earlier this month a video was released confirming French sailor Kito de Pavant’s 60-ft (18.28 m) racing yacht struck a whale on December 6th, 2016 while he was competing in the Vendee Globe yacht race. The vessel was seriously damaged causing it to take on water and requiring Pavant to be rescued at sea.

Asmutis-Silvia adds, “We know whales are vital to keeping our oceans and planet healthy. If that’s not enough of an argument to protect them, then perhaps the concerns about human safety resulting from a collision will be”.

See a Spout: WDC developed See A Spout in collaboration with the National Oceanographic and Atmospheric Administration (NOAA) as an outreach project aimed at promoting responsible boat handling around whales by recreational boat users. The program is focused in the Gulf of Maine, particularly in the Stellwagen Bank National Marine Sanctuary.

Sharing the Seas was developed by WDC , Audubon Society of Rhode Island, and the New Bedford Whaling Museum, in conjunction with US Sailing. Outreach materials were developed to educates sailors of all ages and skill levels regarding the identification and behavior of marine mammals and sea turtles, and to utilize safe boating techniques to reduce disturbances and injury to whales and other marine life.