In the United States, the first 100 days of a newly elected president’s term are thought to represent the new administration’s ability to reach their proposed targets.  While largely symbolic rather than statutory, “the first 100 days” are closely watched by the media and their success measured by public approval ratings.  It is with the idea in mind of measuring the actions of the administration’s first 100 days that we are bringing you our 100 day blog series. The series highlights 6 populations of whales and dolphins for which fewer than 100 remain while arming you, our supporters, with clear information on these critical issues and how you can get involved.  Some are at risk of extinction within our lifetimes; some are at risk of extinction within the next 2 to 5 years.  All of them need your help to survive. 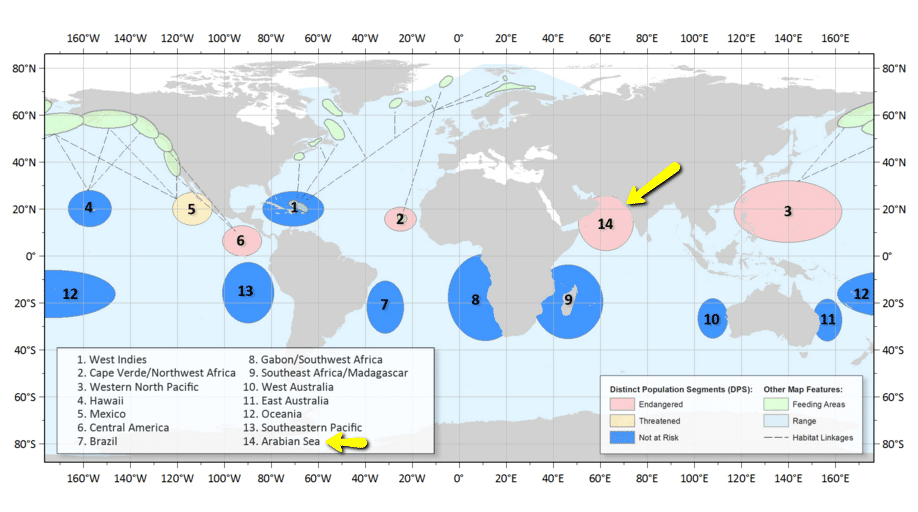 Each year humpback whales make some of the longest known migrations of any mammal, but not the Arabian Sea population. They are the only humpbacks to reside in one area year round. Each winter, in a pattern consistent with other humpback populations, they breed in the Arabian Sea, its warm salty waters giving their calves the warmth and buoyancy they need until their blubber layer develops. Most warm areas don’t provide enough food to sustain these huge mammals, forcing them to travel to cooler nutrient-rich waters to feed between breeding seasons. But off the Arabian Sea Coast of Oman, a significant upwelling system driven by the summer monsoon season supplies a rich source of nutrients that boosts productivity and delivers a bountiful feast straight to the Arabian Sea Humpbacks’ door!

Aside from their unusual migration habits (or lack thereof), these whales look just like your typical humpback whales—they are the same species, Megaptera novaeangliae—yet they are a genetically distinct subpopulation. This means that members of the Arabian Sea population do not breed with other populations of humpbacks. They are completely isolated from other humpbacks, even others present in the Indian Ocean.

It may seem like these whales have found the perfect place to live; however, there are some drawbacks to being confined to such a small area. The Arabian Sea is a busy place, with rapid coastal development, offshore oil and gas exploration, and fishing and shipping traffic occurring right in the whales’ backyard. Accidental ship strikes and entanglements in fishing gear are threats to all humpbacks, as is ocean trash, excessive noise, and pollution. The Arabian Sea population is also more prone to skin diseases and liver problems, intensified by inbreeding within their limited gene pool.

There are fewer than 100 of these unique individuals left and they are listed as endangered on the IUCN Red List of Threatened Species.

They are protected internationally by the International Whaling Commission (IWC) and the Convention on International Trade in Endangered Species of Wild Fauna and Flora (CITES). But aside from a prohibition on hunting cetaceans by the Government of Oman, there are no other local or regional government efforts aimed at saving this shrinking population from extinction.

The good news is that a small range means a smaller target area for conservation efforts. According to the IUCN, there is high potential for the successful conservation of this population, as long as local governments step up and take action to protect them. Concentrated education efforts in Oman, Yemen and Pakistan can educate people about this magnificent species and alert them to their precarious future. We need more protections enacted for Arabian Sea humpbacks and to work to bring them back from the brink of extinction!

Even if these whales don’t live near where you call home, you can help too! Wherever on this planet you live, all water drains to our one global ocean, so your choices matter.

So what can you do to save them?

Subscibe to WDC’s Weekly Blog Digest, and get every blog in the 100 Days series.