The culmination of many months of campaigning to stop British Airways supporting SeaWorld came down to this – me and my colleague, Julia Thoms, standing at the security gate on the perimeter fence of BA’s UK Headquarters near Heathrow on a dark, wet January afternoon.

We know you feel as strongly as we do that British Airways should stop supporting whale and dolphin cruelty by offering to sell tickets to passengers who book through them. 304,996 of you signed our petition on whales.org and the petition run in partnership with our friend Kathleen Haase and our colleagues at change.org.  That’s a lot of support – the equivalent to the population of a major UK city such as Cardiff or Belfast.  But ‘the nation’s favourite airline’ couldn’t care less what you think.

Repeated emails to British Airways’ Environment Department asking for a meeting to hand over your signatures and discuss our concerns were ignored.  Calls to their Press Office only got us a date in the receptionist’s diary. So, yesterday, we took our petition to BA but incredibly couldn’t get beyond the guard at the security gate. “Yes”, he said, “we are expecting you” and “I have been told to take the petition but not to let you any further than this.”

And so it was here that we handed your petition over to the polite security guard in the high-viz jacket. We left feeling angry and frustrated at the contempt BA had shown in treating us, and you, in such an unprofessional and shabby way. 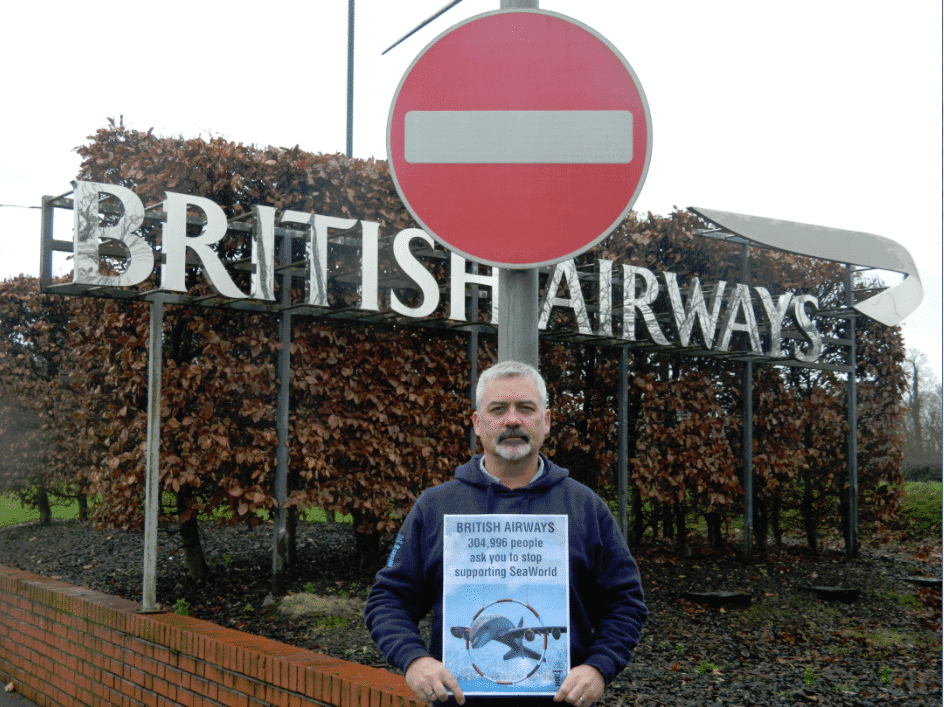 The world is moving on and public opinion is moving with it. Over a hundred million people have watched the documentary Blackfish. SeaWorld’s abysmal performance continues with plummeting share price, staff layoffs and visitors deserting their parks in droves. This week saw the end of theatrical orca shows at SeaWorld. Whatever SeaWorld would have you believe, it was public opinion and not a proactive corporate decision that forced SeaWorld’s hand and made them end the performances and its orca breeding programme.

In recent months, as other major UK travel companies such as Trip Advisor, Thomas Cook and Cosmos have made positive steps regarding their policies on animal welfare in tourism, the British Airways monolith remains stubborn and inflexible choosing to believe SeaWorld’s spin over scientific evidence.  When it comes to corporate, ethical responsibility the airline is in danger of becoming a dinosaur.  And when it comes to listening to and valuing its customers it has shown that it just doesn’t care.

Posted in Blogs & Articles and tagged BRITISH AIRWAYS, captivity, SeaWorld
Preferences
We use cookies to help give you the best experience on our website and information about how you can support us.
Manage options Manage services Manage vendors Read more about these purposes
View preferences
{title} {title} {title}