For nearly two decades, national and regional conservation groups have gone to court to challenge plans from federal agencies regarding dam operations in the Columbia Basin.  Five federal plans have been declared illegal by three different judges, because they failed to protect threatened and endangered Snake River salmon.

This time is different.  Why? On our (WDC) side of things, because now the “whale people” are invested and involved.  The Southern Resident orcas need this to happen to restore salmon runs vital to their survival.  In the big picture, it’s because the most recent court decision ordered the federal agencies to stop avoiding what scientists say is the best thing we can do to restore Snake River salmon – remove the lower Snake River dams.  The agencies must give this option a fair and thorough investigation, and they must consider the needs of Southern Resident orcas.  It’s our job to make sure they do this.

Please sign our petition to demand dam removal on the Snake River to restore salmon for Southern Resident orcas.  Join the #MigrationNation!

We have a unique opportunity now to make sure the federal agencies do things right this time.  Over $15 billion has been spent on salmon recovery, but not a single salmon run on the Snake River has been taken off the Endangered Species List.  The Southern Resident orcas have been listed for over a decade now, and they too continue to decline.  The mountains in the Snake River headwaters are considered some of the best salmon habitat remaining in the lower 48 states.  These cold, clean, high-elevation streams can again produce abundant salmon runs in the near future, and help salmon survive climate change, if only they can reach them.

The last time the agencies examined this issue was 2000, and a lot has changed since then.  Let’s take a look:

1)      The Southern Resident orcas.  Since 2000, the Southern Residents have been added to the Endangered Species List, and extensive research has been conducted to determine what the big threats are and what is preventing their recovery.  Capture efforts in the 1960s and 70s severely reduced the population, but new threats, including prey depletion, toxic contamination, and vessel effects, now prevent their recovery.  The impact of live captures made them endangered; a lack of salmon keeps them that way.  Despite regulations banning capture efforts in the United States, very few concrete management actions have been taken to help the wild orcas families remaining since the Southern Residents were added to the Endangered Species List in 2005.  They need action now to restore wild salmon runs, reduce toxins in their habitat, and address the impact of vessel noise and harassment.

Research in the last decade has confirmed that this small community of whales relies on salmon, specifically Chinook, and they regularly visit the mouth of the Columbia River to forage on returning Spring Chinook.  The Snake River used to be a major source of these large, high-fat salmon, but current numbers are a fraction of historical abundance.  We have a much better understanding now of the link between the Southern Residents and salmon in the Columbia Basin, and know that Southern Resident orcas need Snake River Chinook.

2)      The Northwest no longer needs the electricity generated by the dams.  Energy efficiency and renewable sources have made the power generated by the Lower Snake River dams unnecessary.  There is now two and a half times as much new, renewable energy generation in the Pacific Northwest than is produced by all four lower Snake River dams in a year (2,500 vs. 1,000 average Megawatts).  New conservation and efficiency measures, and planned new renewable energy projects, will replace the power from these dams with carbon-free, salmon-friendly, cost-effective energy.

3)      These dams are money losers for tax- and bill-payers.  Since 2000, use of the lower Snake River to transport goods by barge (the primary purpose of these four dams) has declined by more than 70%.  Meanwhile, the cost of maintaining their aging infrastructure has increased and will continue to climb. American taxpayers and Northwest bill-payers get back less than 50 cents for every dollar they invest in the lower Snake River dams.

4)      Restoring rivers recovers salmon.  Major dams, including on the Elwha River in Washington State, have been removed since 2000, and the salmon have come back.  We know that dam removal works.  Agencies now have a better understanding of how to remove dams and what happens when they do – even companies that own major dams have committed to removing old, outdated ones to benefit their rate-payers and the environment.  Removing dams restores rivers and brings back fish – faster and more successfully than even scientists anticipated.

5)      We now know that climate change could be catastrophic for salmon.  Warm river conditions in 2015 killed more than 90% of adult sockeye salmon returning to the Columbia Basin.  Rising water temperatures put salmon at risk, and the slackwater reservoirs created by dams harm adults on their way upstream, and baby salmon on their way out to sea.  Warm temperatures are lethal to salmon, and disease and parasites thrive in warm water conditions.  Removing the lower Snake River dams opens the passage for salmon to the pristine, cold water streams of the Snake River headlands – a unique refuge from the effects of climate change. 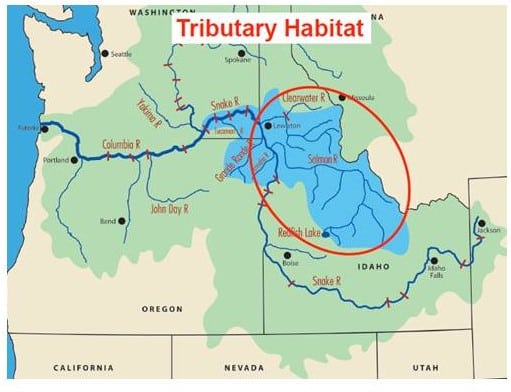 Join the #MigrationNation and help us be a voice for the orcas in this process.  We have a once-in-a-lifetime opportunity for the single greatest salmon restoration and river recovery effort in history, and the Southern Residents need us to act now!

Posted in Blogs & Articles and tagged Dams, MigrationNation, Southern Residents
Preferences
We use cookies to help give you the best experience on our website and information about how you can support us.
Manage options Manage services Manage vendors Read more about these purposes
View preferences
{title} {title} {title}