ACCOBAMS is the acronym for the Agreement on the Conservation of Cetaceans of the Black Sea, Mediterranean Sea and adjacent Atlantic area.  It brings governments in this region together to work out what they can do to ensure the conservation of whales and dolphins and the marine environment in this part of the world.  There are eleven species of whales and dolphins living in the region and all are increasingly threatened by human activities including extensive and large-scale fishing, inescapable, deafening underwater noise, more and faster moving ships, high levels of pollution and habitat degradation.

In his opening speech, Prince Albert II of Monaco stressed the important role ACCOBAMS has to play in ensuring that knowledge about cetaceans and the threats to their future (collected by its scientific committee), is converted into credible protective policy measures.  The Prince highlighted that collecting data alone is not enough; we have to go a step further and we have to have the political will to take action, and make changes in order to protect whales and dolphins. We need to make short term commercial sacrifices in order to benefit from the longer term gains of conserving healthy marine ecosystems. It is essential to create effective protected areas where whales and dolphins can rest and be free of threats.

This is the reason for WDC’s interest and support for ACCOBAMS, which we have been involved with for many years – it provides an essential mechanism for governments to listen to scientific findings and then develop actions to reduce threats and better protect cetaceans. 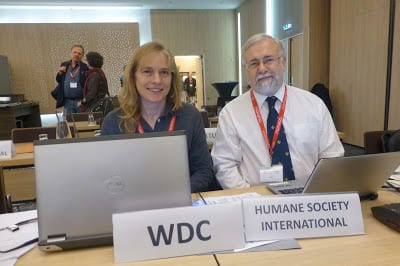 At this sixth meeting of ACCOBAMS, governments made progress in their commitment to continue to cooperate and work together and address several well-known threats to whales and dolphins. Together, governments, scientists and NGOs negotiated detailed commitments and decisions. These are recorded in a series of ‘resolutions’ which spell out how important issues should be tackled one by one:

is the most urgent and pressing threat to whales and dolphins worldwide,

This bycatch resolution emphasises the need to expand collaborative efforts in order to share expertise and understanding of the problem. Conserving healthy cetacean populations in the region is dependent on reducing bycatch. Bycatch needs to be monitored so that fisheries and areas of the ocean with bycatch problems can be identified and tackled.  Investment in further research and development of bycatch reduction solutions and implementation of solutions is also urgently needed.

Reducing the impacts of underwater noise on whales and dolphins (significant sources include military sonar, ship traffic, oil and gas seismic surveys and industrial development in the seas). Governments requested scientists to further develop the concept of quiet zones in the seas with a view to being able to provide noise refuges for these highly acoustic creatures. They identified the need for more discussions with navies active in the region to work together with governments to seek ways of reducing the threats posed to cetaceans by navy sonar. This is hugely important as mass strandings and deaths of whales and dolphins are known to be caused by navy sonar use (navy sonar exercises are currently outside environment legislation and so this is significant progress). They also agreed that thorough Environmental Impact Assessments should be required before noisy activities are allowed to go ahead which are likely to impact cetaceans.

Whale watching is a growing activity in the Mediterranean region and ACCOBAMS recognises the need to regulate it and encourage good practice.

An official ACCOBAMS whale watch logo was endorsed.  This will be awarded to whale watch operators that have been undergone training and been achieved the ‘High Quality Whale watching Certificate’. Operators must abide by a code of conduct to minimise pressure on the whales and dolphins and maximise the educational benefits for people taking part encouraging them to help protection cetaceans.

There is an urgent need to reduce number of ships hitting fin whales and sperm whales as these collisions cause serious injury and death.

This resolution requests governments to introduce speed limits for vessels in critical habitats for whales in the Mediterranean. It has been shown that ships traveling at reduced speeds are far less likely to hit whales.  High risk areas for ship and whale collisions have been identified at sea and these need to be monitored. In addition, additional ways of reducing ship strikes, such as re-routing ships, should be investigated and trialled.

Governments have asked the Scientific Committee to develop plans and recommendations for conserving fin whales, bottlenose dolphins and common dolphins in the Agreement area.  These CMPs will be reviewed and hopefully adopted at the next ACCOBAMS meeting. The plans will include practical actions for addressing conservation problems faced by these species.

The designation of protected areas is recognised by ACCOBAMS as an effective and important tool that should be used in efforts to conserve whales and dolphins. Governments are encouraged to create areas to protect critical habitats of whales and dolphins.

Posted in Blogs & Articles and tagged Homes for Whales and Dolphins, science
Preferences
We use cookies to help give you the best experience on our website and information about how you can support us.
Manage options Manage services Manage vendors Read more about these purposes
View preferences
{title} {title} {title}