September 9-11th marked our 12th Big Watch Weekend for WDC’s Shorewatch sighting project in Scotland. With our team of dedicated volunteers raring to go, we were hoping for a record number of watches.  Unfortunately, high winds on the west coast stopped our west coast volunteers in carrying out many watches and impacted our overall numbers. Despite the bad weather on the west coast, the “Moray Med” was blessed with little wind and sunshine for most of the weekend. 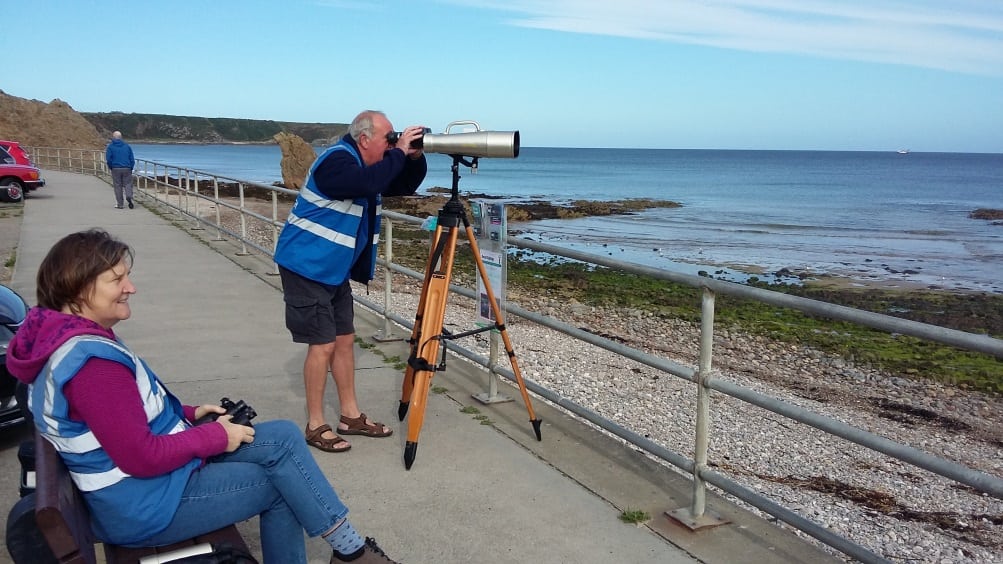 The month of September and indeed BWW September has proven to be a good month for Risso’s dolphin sightings with multiple recordings from Tiumpan, Scalpay, North Shawbost and Wick. For the last 7 years, WDC have been conducting research on the Risso’s dolphins who return every year to feed in the waters off the north of the Isle of Lewis. Along with photo-ID and acoustic research, our Shorewatch recordings go to better understand the movements of this mysterious species.

A curious sighting was recorded by Harris Brooker on the first day of BWW while aboard the Ullapool to Stornoway ferry. Initially, Harris thought he was watching a common dolphin, but after a deeper inspection of a photograph he had taken, he realised that it did not have a distinct yellow patch! This led us to believe it may have been a hybridisation of a common and striped dolphin, which has been previously recorded in the area. However, after much discussion with experts in the field, we decided it was most likely a common dolphin with the tan pigmentation of the hour glass missing. Pigmentation lost in dolphins can be common, and this individual had the flat head and slender beak which can be used as other identification cues of a common dolphin. If you are ever unsure about species ID, a photo can certainly help. 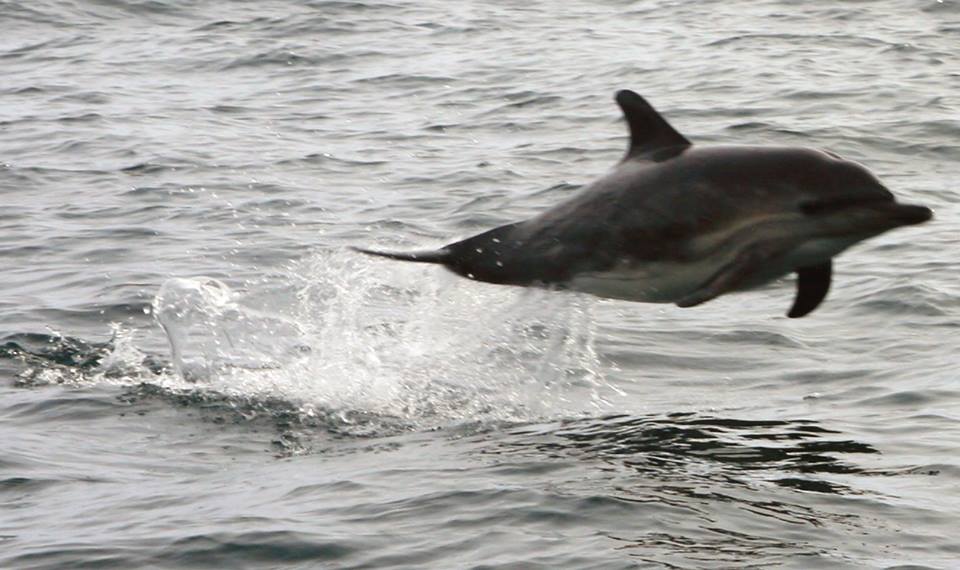 On Sunday, Steve and I, along with newly trained volunteers Helen and Ian, spotted a lone dolphin from Burghead. North 58 were out on the water and they could confirm that the dolphin was Jigsaw. Jigsaw had also been spotted from Spey Bay earlier that day. Jigsaw, a very much loved dolphin, moved away from the Inner Firth and was regularly seen closer to St Andrews and the River Tay but after a nine year absence from the Moray Firth, she is now regularly seen again in her old stomping grounds in the Moray Firth. Charlie Phillips, our Field Officer says – “she’s a wonderful dolphin and was a mature adult when she was first identified in 1989. She had a young calf with her way back then in 1989, “Rusty” was the name given then she had another calf in 1992 called “Puzzle” with her last known calf born in 2001 but we don’t think he or she survived. It’s lovely that such a grand old girl is still out there doing her stuff and breaching too but we think that she might be post-reproductive now as she hasn’t been seen with a calf for 15 years.” 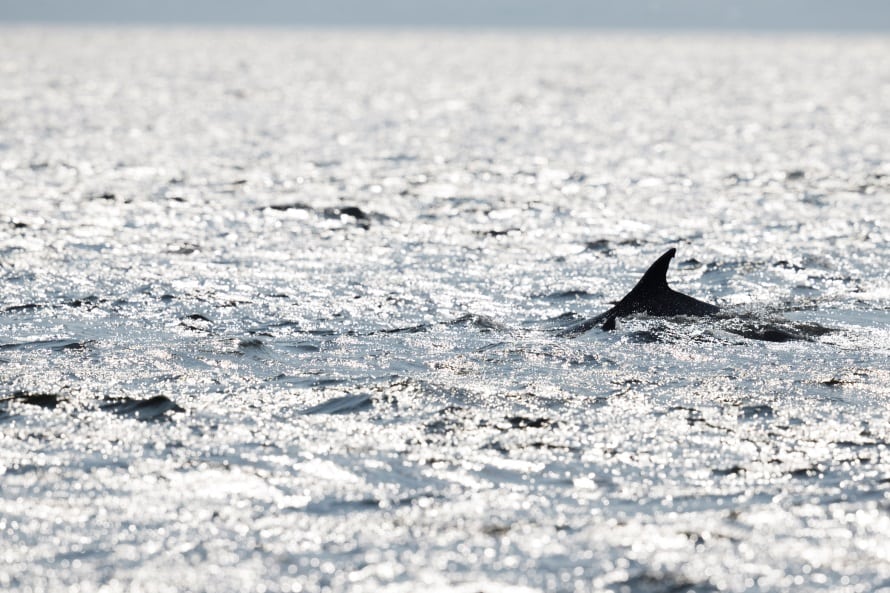 We had a first for BWW this September, with our first Shorewatch wedding! Adele, who has been watching the Moray Firth dolphins all her life, got married on the Saturday of BWW and knew that her wedding would not be complete without a Shorewatch. So, in her wedding dress and accompanied by fellow Shorewatch volunteers, we took to the Burghead watch site with binoculars in hand. Unfortunately, there were no sightings but a great deal of enthusiasm and some lovely pictures. It was a very special day and a great reminder that Shorewatch is not simply a data collection project but also brings people together to share their love for the marine environment. 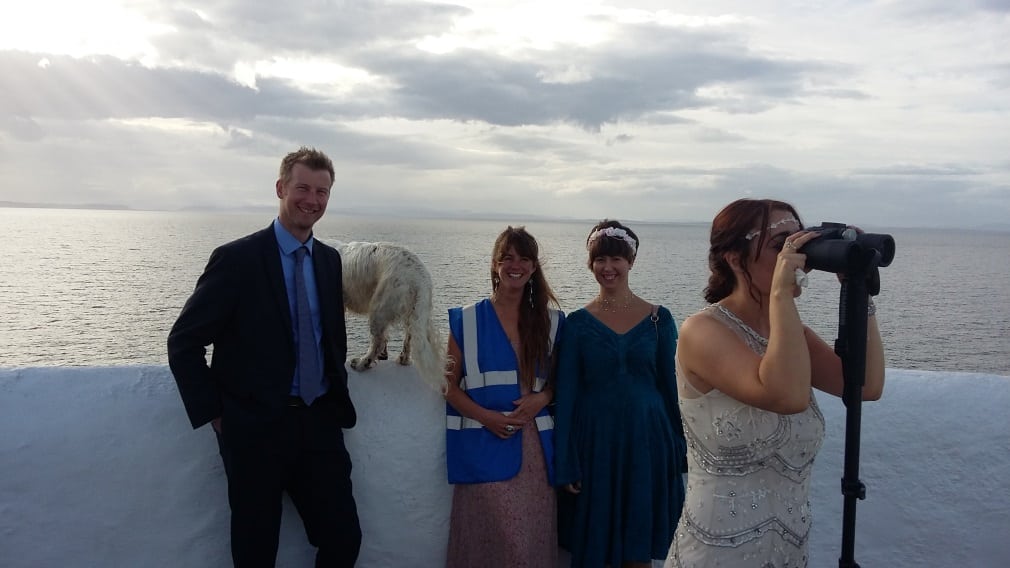 Without the dedication of our volunteers, Shorewatch would not be possible; we greatly appreciate the time and commitment our volunteers give to WDC Shorewatch. THANK YOU.

WDC Shorewatch relies on community volunteers to monitor the presence of whales, dolphins and porpoises around Scotland. WDC asks volunteers to carry out regular 10-minute watches at specific sites to help learn more about how these amazing creatures use our coastline, information which will help in the protection of whales and dolphins. BWW is an annual event in which many Shorewatchers from across Scotland come together and carry out as many Shorewatches as possible, to give us a “snap shot” of whale and dolphin activity. If you would like to get involved contact us at Shorewatch@whales.org/01343820339.