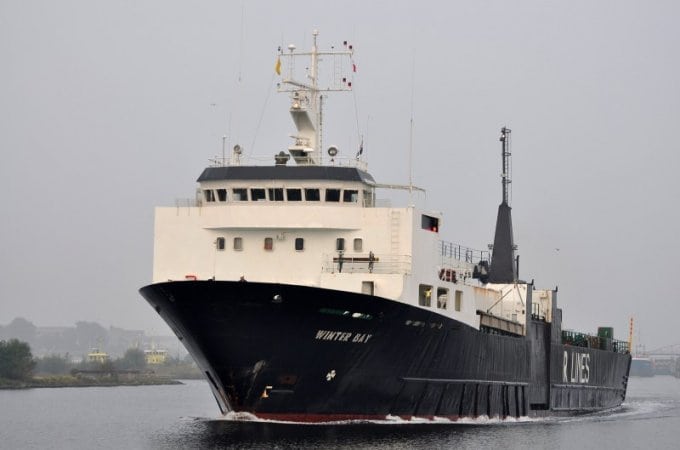 Well, well, well. Just as I was wondering whether we would ever confirm the Winter Bay’s recent cargo, and darn me if fin whaler, Kristjan Loftsson, doesn’t helpfully step in to provide the answer. Regular blog readers may recall that back in August, I posted news of our discovery that the Winter Bay – the vessel used last year to carry fin whale meat to Japan – was once more on the move, having snuck out of port in south-west Iceland in late July, with a permit to (once again) cross Russia’s Northeast Passage which is only navigable for a few months each year. Whilst we monitored the vessel throughout its journey and subsequent arrival at the port of Osaka on Friday, 9th September, we still did not know for sure that it was carrying whale meat.

A strong suspicion, yes – not least because this appeared a carbon copy voyage of that made last summer – but nothing more tangible than this.  Then, a colleague from the US-based Animal Welfare Institute obtained an Icelandic customs record showing that almost 1,530 tonnes of ‘whale products’ had been exported from Iceland to Japan at that time. This took us a step forward since whale meat was clearly being exported by some means or other; but, frustratingly, we still had nothing to conclusively tie that export with the Winter Bay and no confirmation of the precise whale species involved.

Commonsense, however, suggests that such a large amount of whale meat would almost certainly be fin whale, given that a record number of fin whales (155) were killed off Iceland last year and we were pretty sure that the catch had not yet found a market.

And then an Icelandic contact sent a link to Kvótinn, an Icelandic fisheries website, which confirmed that the Winter Bay had indeed been carrying frozen Icelandic whale meat and products. The article featured an interview with Kristjan Loftsson, who seemed happy that his cargo had reached Japan without any major problems, commenting: “The contents were meat, blubber, and various other whale products. We produced all those products for [the Japanese] market and had no choice but to ship them out”.

Bingo bongo – the confirmation we were after! Somewhat oddly, though, in a nod to his apparent disagreement with Japan earlier this year about that country’s meat hygiene standards – which fortuitously led to his cancelling this season’s fin whale hunt  – he commented that his fin whale meat is now being analysed, adding  “the analytical methods used … are not in accordance with any international procedures for such analysis. What will come out of these ongoing discussions with the Japanese authorities remains to be seen.”

We must wait then to find out whether Loftsson’s fin whale meat will be cleared for sale within Japan. If so, his freezers will be empty and his confidence high, raising the spectre of a resumption of the fin whale hunt next year. If the meat is refused entry, however, Mr Loftsson may yet cast around for an alternative outlet. Whilst my hope is that he is offloading whale meat for the last time, past experience suggests that we must remain vigilant.

As it happens, today marks the start of the 17th meeting of the Conference of the Parties to CITES (the Convention on International Trade in Endangered Species), which is taking place in Johannesburg. Iceland and Japan have both taken out reservations against the listing of fin whales under Appendix 1 of CITES and therefore can legally trade this endangered species with each other. Iceland is the largest exporter of whale meat, Japan the largest importer. Since 2006, and including this latest shipment, Loftsson’s company has exported close to 9,000 tonnes of fin whale products to Japan.

In a recent joint press release, we condemn this escalating trade in whale meat which undermines CITES and highlight the fact that a recent global analysis of trade in Appendix 1 species by the United Nations Environment Programme’s World Conservation Monitoring Centre specifically highlighted trade in meat from fin whale (as well as minke whale) as an issue of concern.

Let us hope then, that this month’s CITES meeting shines a spotlight on this shameful trade – and at the same time, Japan casts Loftsson and his cargo into the shadows.

Posted in Blogs & Articles and tagged Iceland, iceland whaling fin whale, Whaling
Preferences
We use cookies to help give you the best experience on our website and information about how you can support us.
Manage options Manage services Manage vendors Read more about these purposes
View preferences
{title} {title} {title}