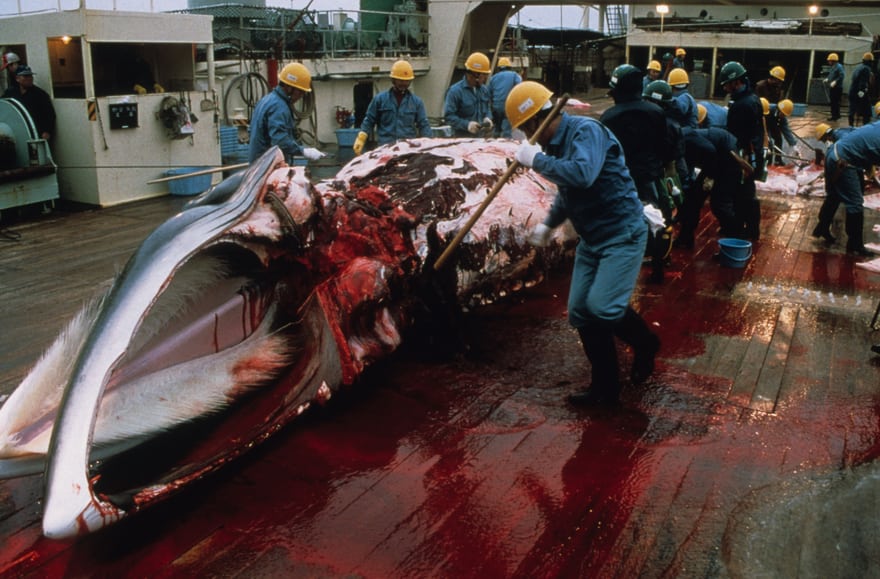 Dr. Philip J. Clapham seems to be on a publishing roll at the moment. A welcome series of papers on whale conservation and the tragedy of whaling have been flowing from his laptop during the last year.

The most recent work we would note is an article by Yulia V. Ivashchenko and Dr. Clapham, who last year published together, ‘What’s the catch? Validity of whaling data for Japanese catches of sperm whales in the North Pacific’, and in 2016 have followed up this paper with ‘Stretching the truth: length data highlight falsification of Japanese sperm whale catch statistics in the Southern Hemisphere.

The paper, from the Royal Society, follows up on the authors’ 2015 study which showed extensive dishonesty in Japanese under- and miss-reporting of sperm whale catches in the North Pacific, The paper undertakes “a similar comparative analysis of Japanese and Soviet sperm whale catches from the Southern Hemisphere (SH)” and concludes “that extensive falsification also occurred in Japanese factory fleets in that region.”

By a careful examination of data on whale catches held at the International Whaling Commission (IWC) headquarters, in Cambridge, UK, the authors have compared Soviet and Japanese pelagic sperm whales catches in the Southern Hemisphere between 1960-1975.

Firstly I am guessing you may be asking what use is looking at data over half a century old?

Well, in fact its crucial and much of the work of the IWC’s Scientific Committee in making population assessments of current whale population sizes relies heavily on historical catch data. With such long-lived fellow creatures, how do we know if a population is recovering if we don’t know what that population looked like a hundred or fifty years ago?

The authors used the introduction of the 1972 IWC International Observer Scheme (IOS), which saw non-national observers put on board foreign whaling vessels, as a point in the history of whaling to be able to compare whaling before, and after, the whaling governments relinquished some control the inspection of its activities. That is, they could no longer manage all inspection and compliance activities themselves without the prying eyes of other countries.

The introduction of the foreign observers seems to have had a significant impact. 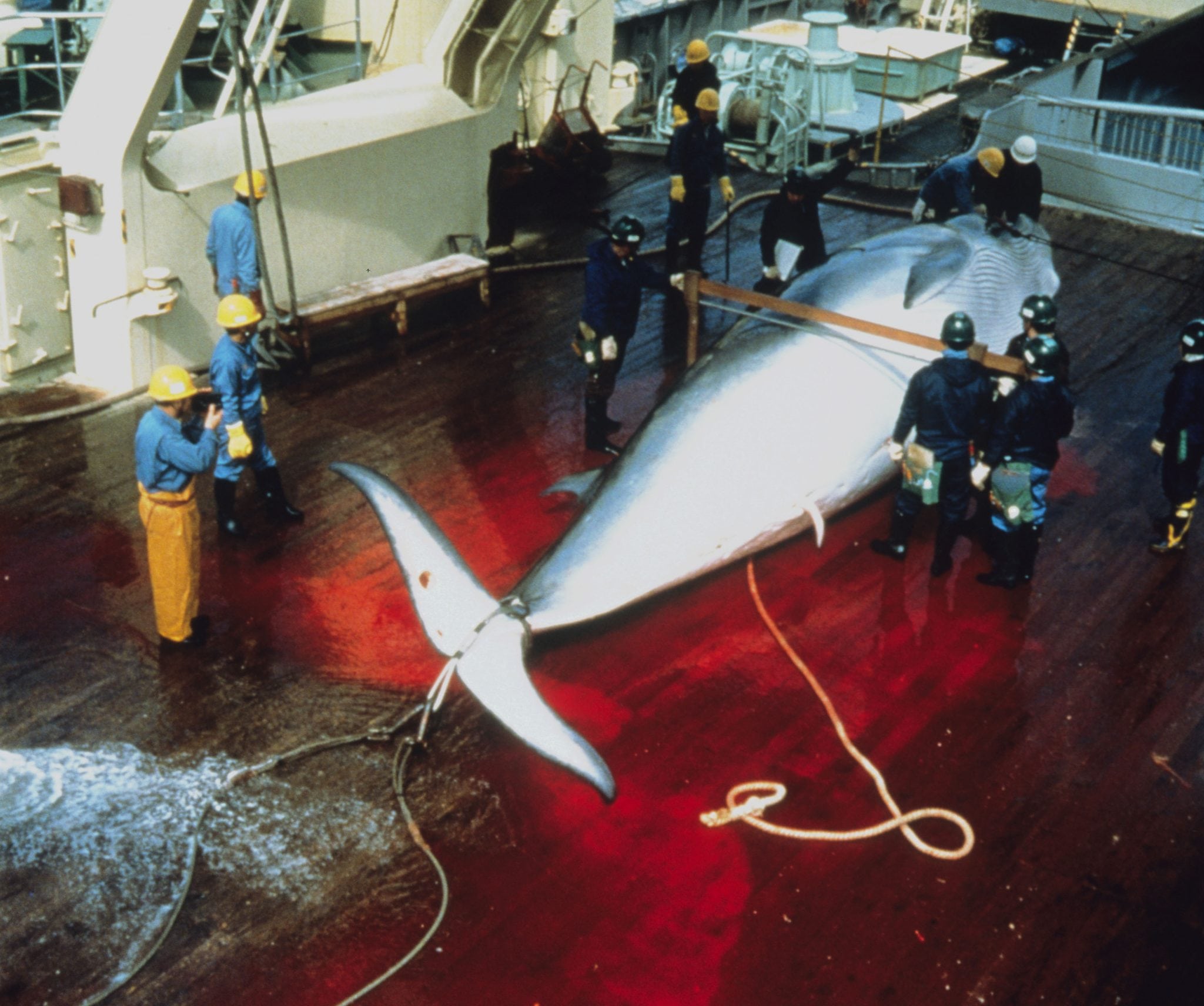 The recently revealed Russian whaling data is known to be accurate to an acceptable degree as it comes from the actual logs of the whalers and not the falsified accounts submitted to the IWC. The Japanese data on the other hand is the officially sanctioned data as supplied by the Japanese Government to the IWC; data that to the best of my knowledge, the Japanese Government has never withdrawn or sought to amend.

As in their research in the North Pacific, the authors’ analysis highlights the implausibility of the length statistics for Japanese takes of sperm whales in the Southern Hemisphere.

Clapham and Ivashchenko report that prior to implementation of the International Observer Scheme the Soviet fleet had killed 5536 female sperm whales, of which only 153 (2.8%) were at or above the minimum legal length of 11.6 m.

However, some 97.2% of all the sperm whales killed by the Soviets were below the legal length for females to be taken, as authorised by the IWC.

In contrast, during the same period, Japan killed 5799 females and reported that 5686 (98.5%) were of legal size, as set out by the IWC. Furthermore they claimed that 88.5% of the entire length distribution reported as being between 11.6 and 12.0 m – a staggering amount of whales falling in this one 40cm distribution.

Post the introduction of the IOS it would appear that the proportion of legal sized females declined dramatically from 98.1% (5686 of 5799) to 9.1% (152 of 1665) after 1971. This not so subtle subterfuge seems to have spilled out into the reporting of kills of larger females (the authors take greater than 12 metres) which were recorded as being 22 times more common in the Japanese hunt than were present in the Soviet catches (553 of 5799 versus 24 of 5536, respectively.

Interestingly this was also not the case after 1972. As the authors state,

“Prior to implementation of the IOS, Japanese fleets were supposedly able to catch 37 times the number of legal sized females (s) as the Soviet fleet. The greatly skewed length distribution in the Japanese catch, together with the high frequency of large females, all indicate extensive falsification of length data…

Nor can the difference between Soviet and Japanese length distributions be explained by geographical differences, as both whaling operations overlapped in their spatial and temporal hunting effort, and neither country caught more than a few females south of 50 S.”

Effectively, the authors found that the Japanese data became much more consistent with that of the Soviets after international inspections started.

The papers imply that the Japanese whalers were using a series of techniques to undermine the IWC regulatory procedures.

“The phenomenon of ‘stretching’, whereby an undersized whale’s reported length was increased, was well known throughout the industry. Stretching was employed to avoid an infraction penalty when an undersized animal’s length was misjudged by a harpooner.

However, as in the North Pacific, the SH data clearly reflect more than the occasional accidental take, and indicate that the catches made by Japan prior to the IOS involved the intentional taking of numerous under-sized whales.”

The paper goes onto note,

“It is not known whether the Japanese misreporting involved falsifying catch numbers as well as length statistics, or changes in the sex of the catch (as routinely occurred in Soviet reports to IWC as well as in the Japanese coastal fishery. Whatever the case, the Japanese data on length (and possibly also catch numbers) currently in the IWC Catch Database must be regarded as unreliable and should not be used in population assessments.

Given the widespread misreporting that is known to have occurred in the North Pacific, and the suspicions raised within the IWC at the time, the SH results are not surprising. Nonetheless, the misreporting by Japan, together with the USSR’s 30-year campaign of illegal whaling, underscores the past failure of the IWC to manage whale stocks and effectively regulate whaling.”

Despite the impact the foreign observers seem to have had, Clapham also stated in an interview with The Japan Times (17th September 2016), that even after the implementation of the IWC International Observer Scheme, Japan’s whaling interests still tried to usurp the inspectors to maximize their financial returns

He goes on to note that genetic analysis of what’s being sold in the Japanese market today indicates that there is whale meat available that you “can’t account for through the whaling we know about”.

Clapham and Ivashchenko’s papers raise a set of serious questions.

1. Firstly, how can Japan be self-issuing quotas for sperm whales when the IWC database is so corrupted, – corrupted by Japan itself?

2. Secondly, how can the rest of the IWC trust a Japanese Government that has not acknowledged the historical corruption in its whaling industry and previous government inspection schemes?

3. Furthermore how can we and the countries that make up the IWC trust a Japanese Government that now claims that its whaling incorporates “extensive management requirements, such as monitoring, compliance and surveillance measures” (IWC/66/16 Discussion Paper Responses to Japan’s questionnaire and a Way Forward).

In the same paper to be discussed at this year’s IWC Japan asks the question,“How can we overcome the “dysfunction” of the IWC?”. I would suggest that any so-called ‘dysfunction’ in the IWC is a product of the past and current activity of Japan.

As a first step, Japan should withdraw all its ‘dysfunctional’ so-called ‘scientific whaling’ permits, the implementation of which are undermining the authority of the IWC and flies in the face of the decision of the International Court of Justice.

Secondly, Japan should acknowledge the findings of Clapham and Ivashchenko and begin an investigation its own whaling records with the aim of producing accurate records to be submitted to the IWC.

Thirdly, Japan must stop seeking to load the IWC with supporters of its whaling through misuse of its overseas aid programme. Subverting democracy is never a welcome attribute in a nation that is seeking to play an increased role on the international stage.

Posted in Blogs & Articles and tagged IWC66, Whaling
Preferences
We use cookies to help give you the best experience on our website and information about how you can support us.
Manage options Manage services Manage vendors Read more about these purposes
View preferences
{title} {title} {title}