Here in the UK, WDC is rightly proud that the last dolphinarium closed its doors over 20 years ago and there is no political will or public desire for them to reopen anytime soon. Sadly, a different attitude seems to prevail among many British holidaymakers whilst on holiday abroad as the major UK tour operators are still actively promoting marine park facilities, zoos and aquaria holding whales and dolphins captive as an ‘attraction’.

Addressing the continued promotion by UK tour operators of these outdated and cruel attractions has been a major focus of WDC’s campaigning work for several years now and we have made significant progress in addressing this issue within the UK travel industry. There is, however, still a long way to go.

In 2013, the UK’s largest travel association, ABTA, published animal welfare guidelines. We were consulted on these and, if they were fully adhered to, they would give significant protection to whales and dolphins threatened by capture and captivity in facilities visited by UK holidaymakers. Frustratingly, however, three years on from publication, ABTA members such as Thomas Cook, Thomson, First Choice, Cosmos and Virgin Holidays still sell trips to facilities which do not comply with the travel industry’s own guidance. While the guidelines include specific recommendations on Dolphins in Captive Environments, they are, by definition, just guidelines and as such unenforceable.

Our conversations with ABTA continue to push for compliance with the guidelines and we now contribute to their welfare working group on a regular basis.

On a more positive note, immediately following the launch of our campaign in 2014 calling on Sir Richard Branson to end Virgin’s relationship with SeaWorld, Sir Richard took action and pledged not to work with any facility that sourced whales and dolphins from the wild. Virgin also established a multi-stakeholder process to look at the continued captivity of whales and dolphins which continues to this day.

One of the toughest nuts to crack has been with British Airways. We also met with them in 2014 as they were keen to understand both side of the captivity debate. As the UK’s national airline we had high hopes for the BA meeting as we believe that the company’s environmental policy should reflect the nation’s ethics and values.

At the BA meeting we presented a 250,000-strong change.org petition that was started by WDC supporter, Kathleen Haase, calling on the airline to end its relationship with SeaWorld.

WDC also produced the compelling scientific evidence BA requested, starkly illustrating how poorly whales and dolphins fare in captivity which, we thought, was well received. On meeting with SeaWorld, however, at a later date, the theme park persuaded them that all their care and welfare standards exceeded best practice – an opinion which BA preferred to believe.

In March this year SeaWorld stunned the anti-captivity lobby and the marine park industry with the announcement that it was ending its orca breeding programme. This came after the earlier announcement that they would also end their circus-style orca shows. These ground-breaking decisions means that the 29 orcas SeaWorld currently holds in both the US and the Canary Islands would be the last generation to be kept in their tanks. Make no mistake, this business decision was very much driven by public opinion as more and more people question the ethics of keeping such powerful, sentient creatures captive. Since 2013 and the release of the award-winning documentary, Blackfish, visitors have deserted SeaWorld’s parks in droves and sent the share price tumbling. 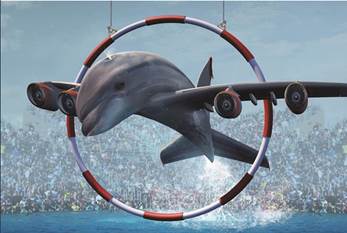 SeaWorld’s senior management have listened to the public and media pressure and seen the light on captive orcas. It is a huge step in the right direction but it is just that, a step and much more needs to be done including the introduction of sea pen sanctuaries to retire captive whales and dolphins. In the immediate term, however, there needs to be a similar commitment for the other 168 whales and dolphins held at SeaWorld parks for which no comparable announcement has been made. Belugas and all the forgotten dolphins face the same risks to their health and welfare as captive orcas.  Why is their situation less important?

So, British Airways in the light of SeaWorld’s tacit acceptance that orcas are just not suitable for an impoverished life in a barren concrete tank we believe the time is now right for you to revisit your position on supporting these facilities and call on you to end your business relationship with SeaWorld.

Please support our campaign and sign the petition now.

Posted in Blogs & Articles and tagged BRITISH AIRWAYS, forgotten dolphins, SeaWorld
Preferences
We use cookies to help give you the best experience on our website and information about how you can support us.
Manage options Manage services Manage vendors Read more about these purposes
View preferences
{title} {title} {title}