As WDC North America’s Conservation and Education Manager, I spend a lot of my time working on outreach projects to educate children and adults about whales and dolphins.  One of my favorite roles is educating boaters about operating safely around whales.  For the past five years I have worked on programs for commercial whale watching boats and recreational boats, and within the last year I’ve added sailboats to that list. 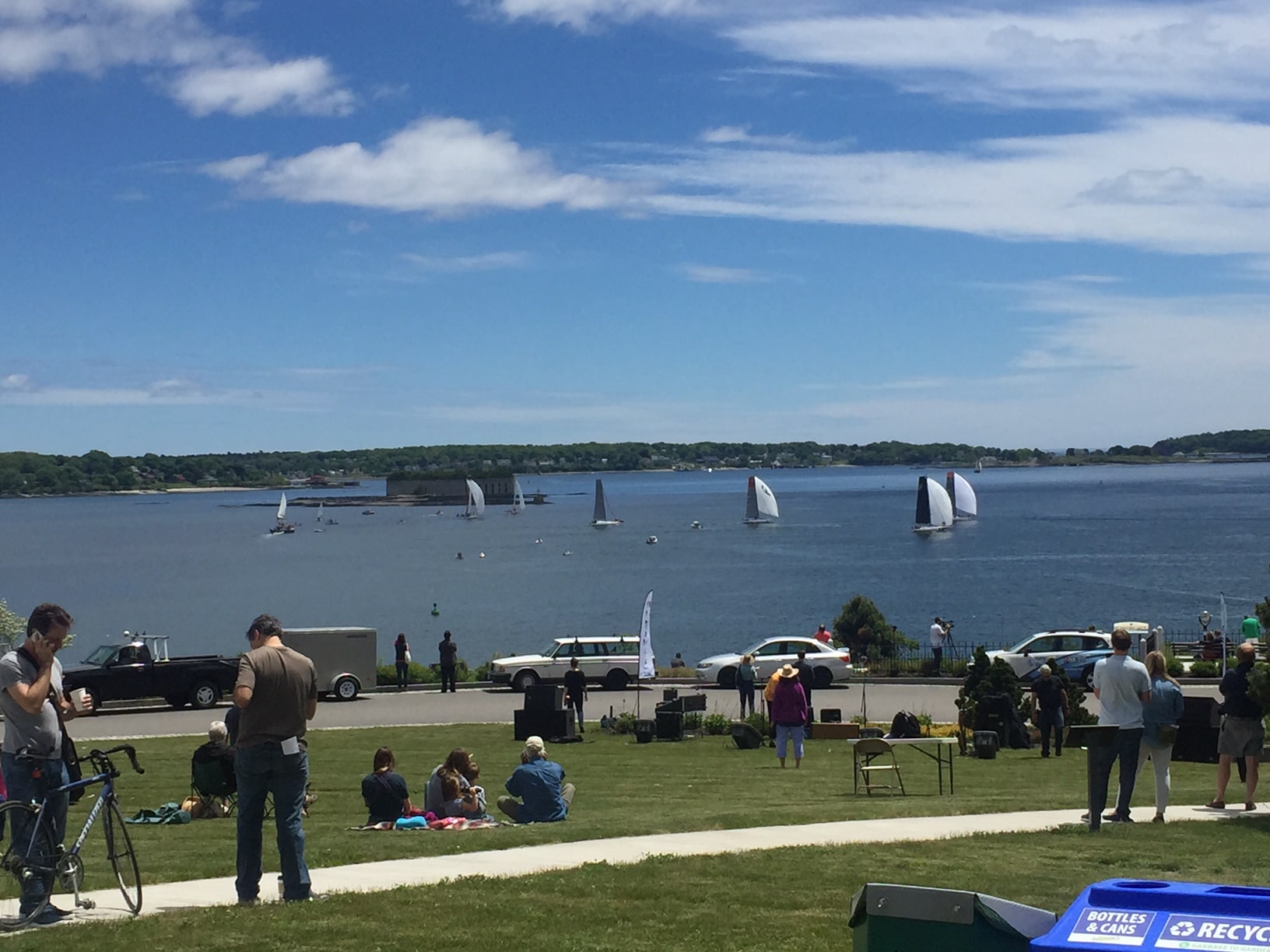 It is the result of WDC’s new collaborative outreach project for the sailing community that I was invited to participate in the Atlantic Cup Race Village at the race’s culmination in Portland, Maine.  Along with other colleagues on the North Atlantic Right Whale Consortium’s Education Committee, we have been working with US Sailing to develop materials for distribution to recreational and professional sailors.  The goal of this program, called Sharing the Seas: Safe Boating for Sailors and Whales, is to communicate information regarding the identification and behavior of marine mammal and sea turtles to sailors. This knowledge will empower sailors to not only utilize safe boating techniques that reduce disturbances and injury to whales and other marine life, but also help save whales by reporting sightings of critically endangered North Atlantic right whales and entangled whales to proper authorities.  To do this we developed the acronym SAIL:

The Atlantic Cup was one of our first events having direct contact with sailors, and personally my first experience in this arena. It was a great event with an amazing view of the inshore races that took place throughout the two days we were there.  We had distributed our informational handouts to the race coordinators prior to the race’s start in Charleston, SC.  There are two legs of the race, with a stopover in New York before traveling up to Portland.  May/June is still a migratory time for many large whale species, including the North Atlantic right whale, so we wanted to make sure the sailors knew what to look out for as they were traveling up the East Coast. 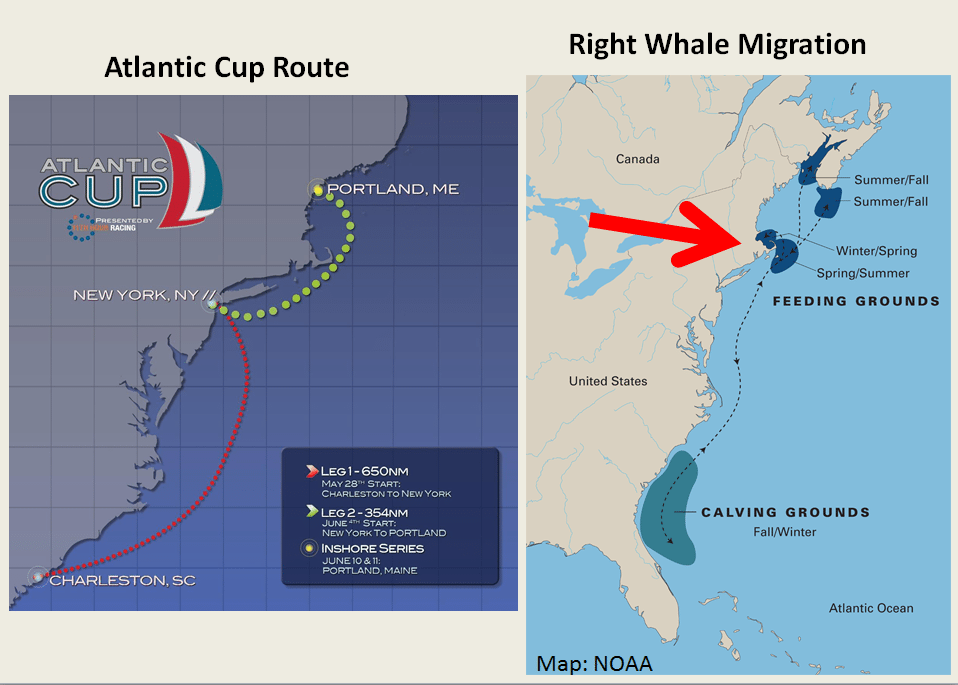 We were thrilled to learn that the race coordinators also asked racers to turn on their auxiliary engines in certain areas where whales were likely to be spotted! It is a common misconception that boats under sail are safest for whales because they won’t disturb them, however, a whale may not even know the boat is in the area if it is not producing any sound (see tip #6).  Thankfully, the teams arrived safely in Portland with no collisions to report.

The sailing industry has been wonderful to work with.  Not only is there an investment in human safety, but there is also a genuine interest in protecting marine mammals while under sail.  We know that collisions unfortunately happen, and it puts both parties at risk of severe injury when it does. We also encourage sailors (anyone heading out on the water, really!) to ask questions about safe boating around whales, so that they are well informed on how to avoid the worst case scenario.  I also want to give a shout out to coordinators of the Atlantic Cup, along with 11th Hour Racing, for their focus on eco-friendly programs and events.  There were recycling and composting bins at the event, water filtration stations so that people didn’t use single-use plastic bottles, and their goal was to have a zero-waste event. As it says on their website:

“The Atlantic Cup presented by 11th Hour Racing is committed to being the most environmentally responsible sailing race in the United States. Since 2012, teams and race management have worked together to create a fully carbon neutral event. As the race grows, race management will continue to seek innovative ideas and products that align with its mission. We encourage you to explore our sustainability page to learn more about the unique steps the race, its teams and its presenting sponsor, 11th Hour Racing are taking to make this a truly sustainable event. Learn more about sustainable sailing!”

I learned quite a bit about sailing during my weekend in Portland, and was genuinely enthralled watching the races take place in front of us.  I heard many terms used repeatedly, including tacking, heeling, masts, jibing, upwind, downwind, and most significantly, spinnaker.  It is a fairly common word when spoken by the average sailor, but I couldn’t help to think of a humpback whale named Spinnaker, who was a regular visitor to the Gulf of Maine.  She was born in 2004, and yes, she was named after the spinnaker used in sailing; she had a mark on her tail that resembles a spinnaker.  Unfortunately, thinking of this whale did not bring back happy memories, as Spinnaker lost her life on June 11, 2015.  She stranded on a beach in northern Maine at the young age of 11.  During her short time on this planet, she suffered from three different entanglements in fishing gear. It is certainly a tragic story, and one that researchers will remember for many years to come. 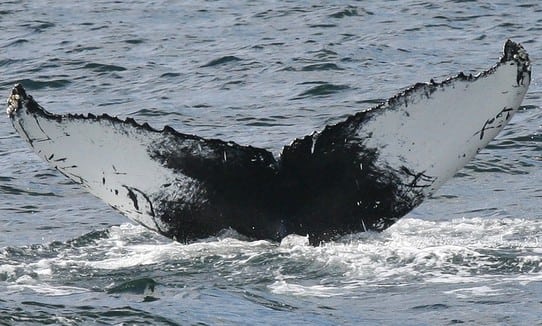 It is an unfortunate reminder, and added motivation, that in this field of work we have victories and we have losses.  We hope for more victories, but the losses serve to remind us that each loss of life is significant in these endangered populations and we have more work to do.  Our efforts to prevent entanglements in fishing gear and collisions with vessels are vital for their survival, and we couldn’t do what we do without the help of our supporters and advocates.  If you would like to contribute to this effort, please consider making a donation today.