Last month WDC headed back up to the very north of Scotland to participate in the annual Orca Watch week in Caithness.

The event, run in conjunction with the SeaWatch Foundation, is now in its 5th year and once again rewarded the hardy team of spotters on the ferry, cliffs and headlands with some incredible sightings.

WDC’s Shorewatch team of volunteers were also out in force to help document all the passing cetacean traffic through the Pentland Firth.

During the course of the week orca were recorded on 10 occasions with sightings of minke whales, common dolphins, harbour porpoise and a possible humpback whale.

The orca stars of the week were an Icelandic female and her pod (including a new baby) known to researchers as 019 or ‘Mousa’. I was lucky enough to see her in Iceland in early March and she was then spotted off the north coast of Scotland in mid-May – a journey of nearly one thousand miles. She is a very distinctive whale and has a half-moon shaped notch out of the trailing edge of her dorsal fin.

This seems to be an annual  journey Mousa and her family have been making in recent years as they leave the herring-rich waters of Iceland and head south at a time that coincides with the Scottish common seal pupping season.

This year, Mousa headed deep in to the Moray Firth and was spotted just a few miles off Inverness – the furthest south the group has ever been recorded.

Orca researchers led by Dr Filipa Samarra at St Andrews University have so far confirmed just 9 orcas from the Icelandic population in Scottish waters and the reasons why so few make the trip still remains a mystery. 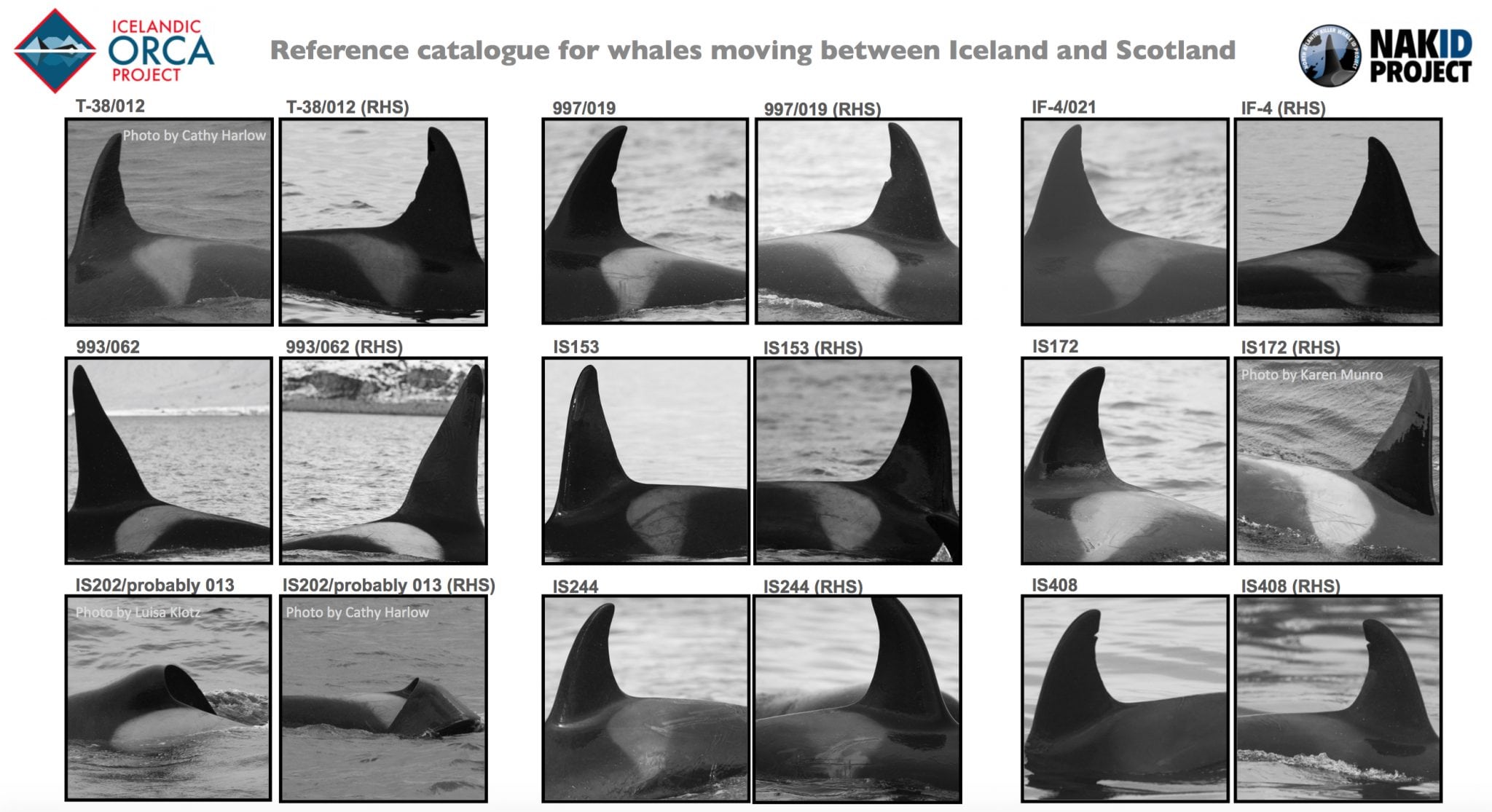 Watching for orcas requires patience and a good deal of luck. One of our team, Steffi from Germany, decided one morning to take the 40 minute John O Groats ferry to the Orkney Islands and back instead of heading up to our usual vantage point – the lighthouse at Duncansby Head.

This proved to be an inspired decision as Steffi was rewarded with an encounter of Mousa  and her family heading west through the Pentland Firth. The ferry had only been underway for five minutes but Steffi managed to quickly unpack her camera in the nick of time! 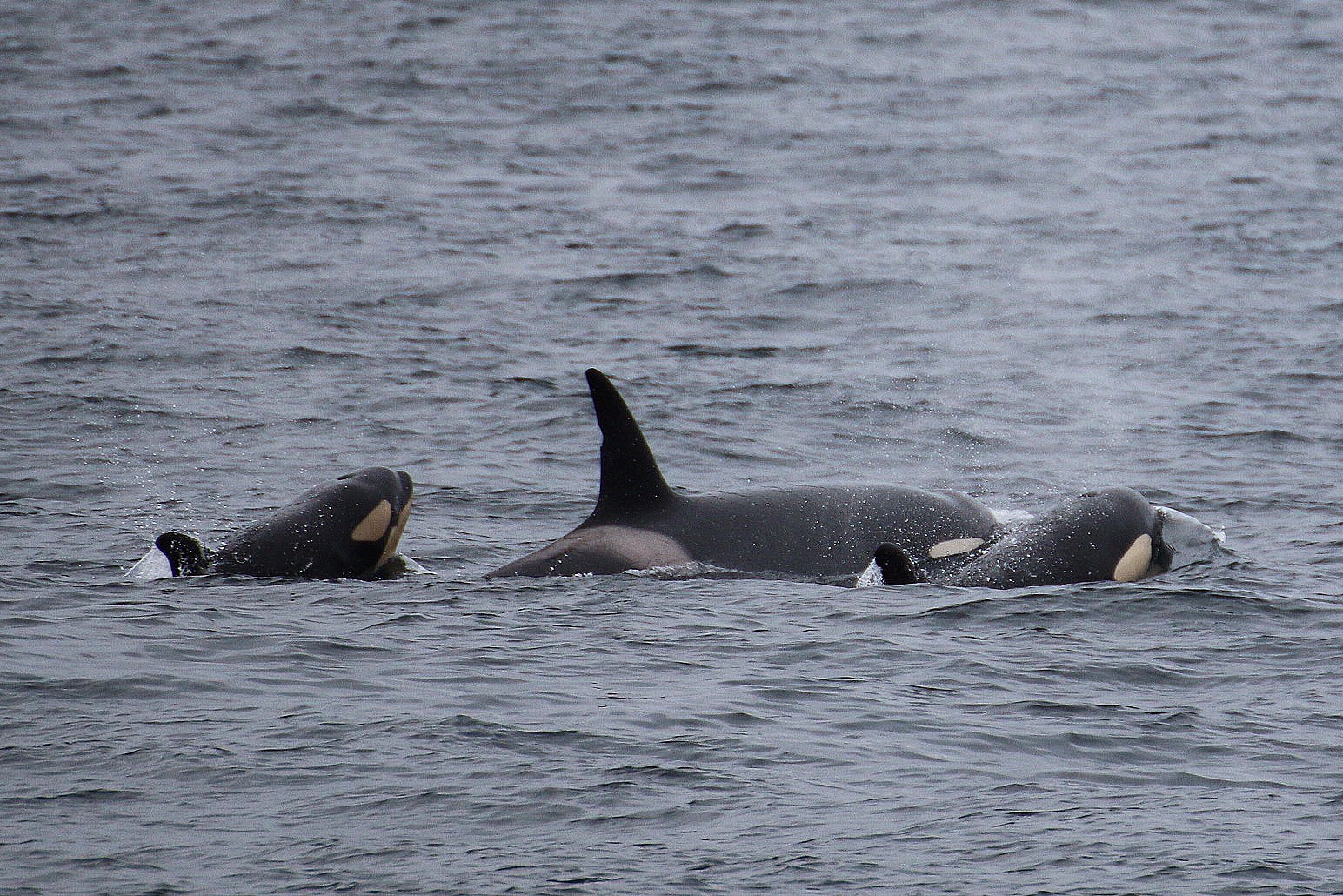 During the week, WDC delivered several presentations on orcas at community centres in Wick and Dunnet as well as one at the Scottish Dolphin Centre in Spey Bay. 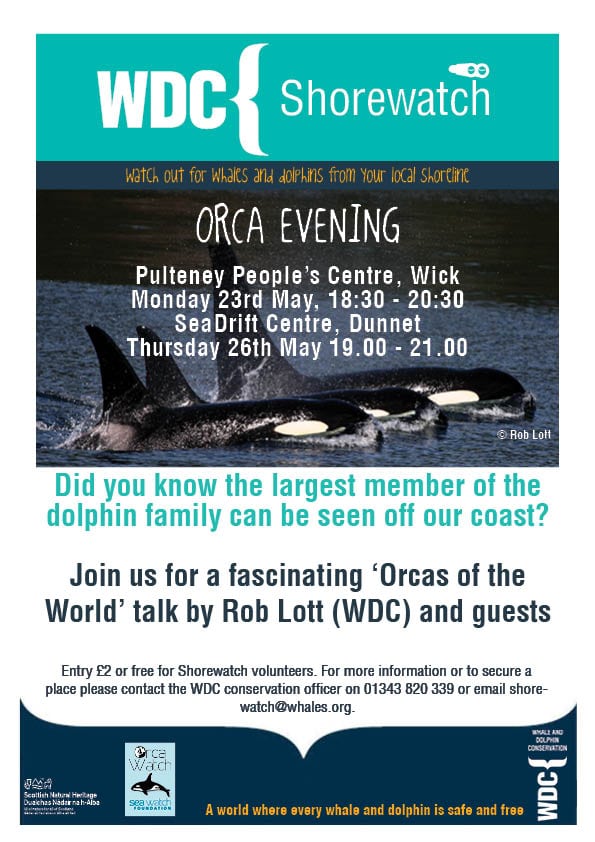 The WDC Shorewatch team held an interpretation stand at John O Groats and were on hand at Duncansby to direct people to where orca and other wildlife were spotted. “Over the week we spoke to over 100 people who were keen to see orca and other wildlife of the area. The excitement of the week was infectious, everybody we spoke to, irrespective of age, were delighted to be a part of the fun.” Katie Dyke, Scottish Conservation Officer. 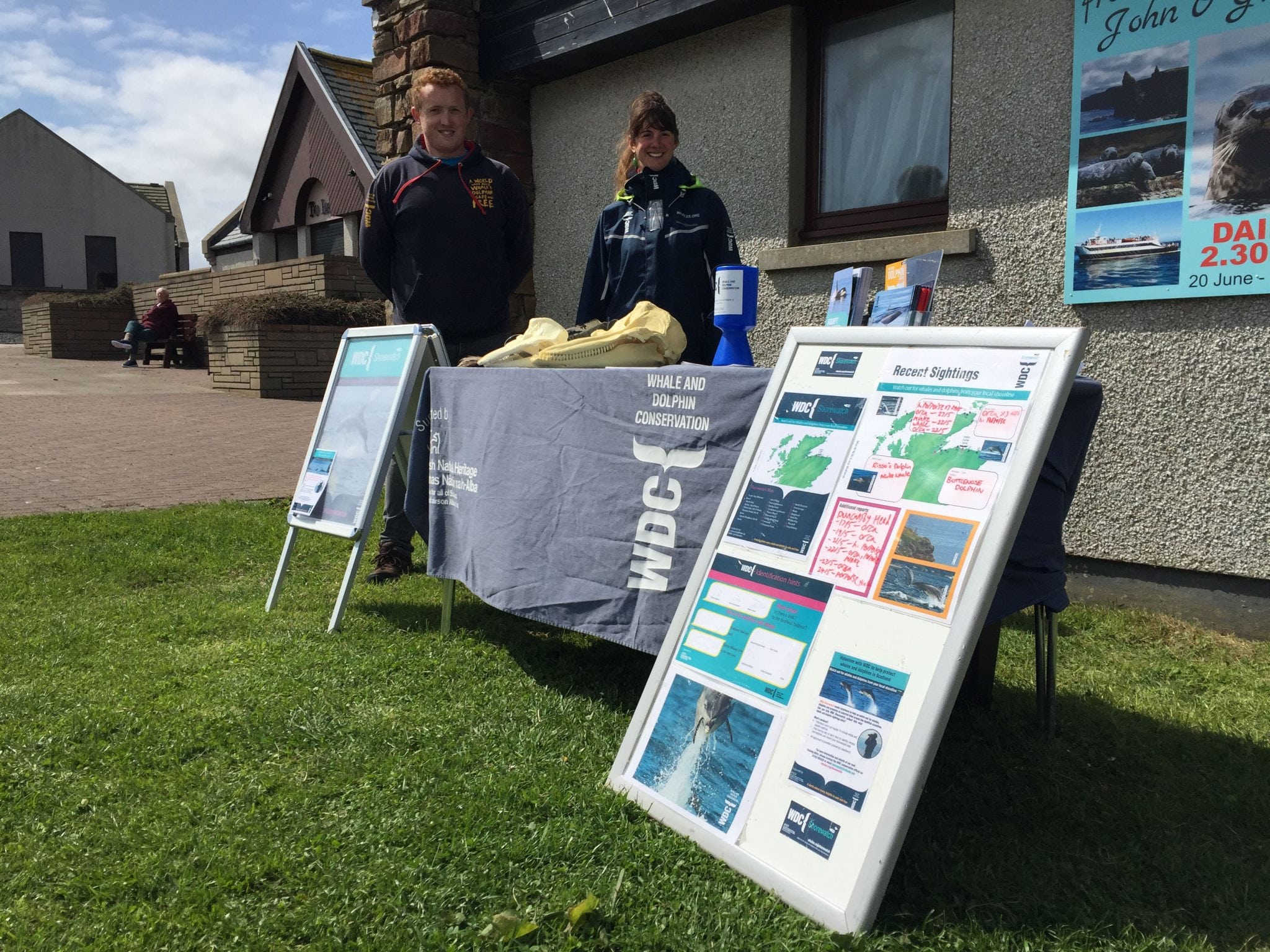 The orca sightings once more created a buzz of media interest, none of which would be possible without the amazing network of people who alert us to any sightings along this spectacular but remote coastline.

It is important to remember that these creatures are vulnerable and our seas are becoming increasingly more noisy and polluted. We appreciate that it is very exciting to see these incredible creatures up close, but please respect them and the marine code and where possible enjoy a sighting from the shore where we can watch without disturbing natural behaviours. 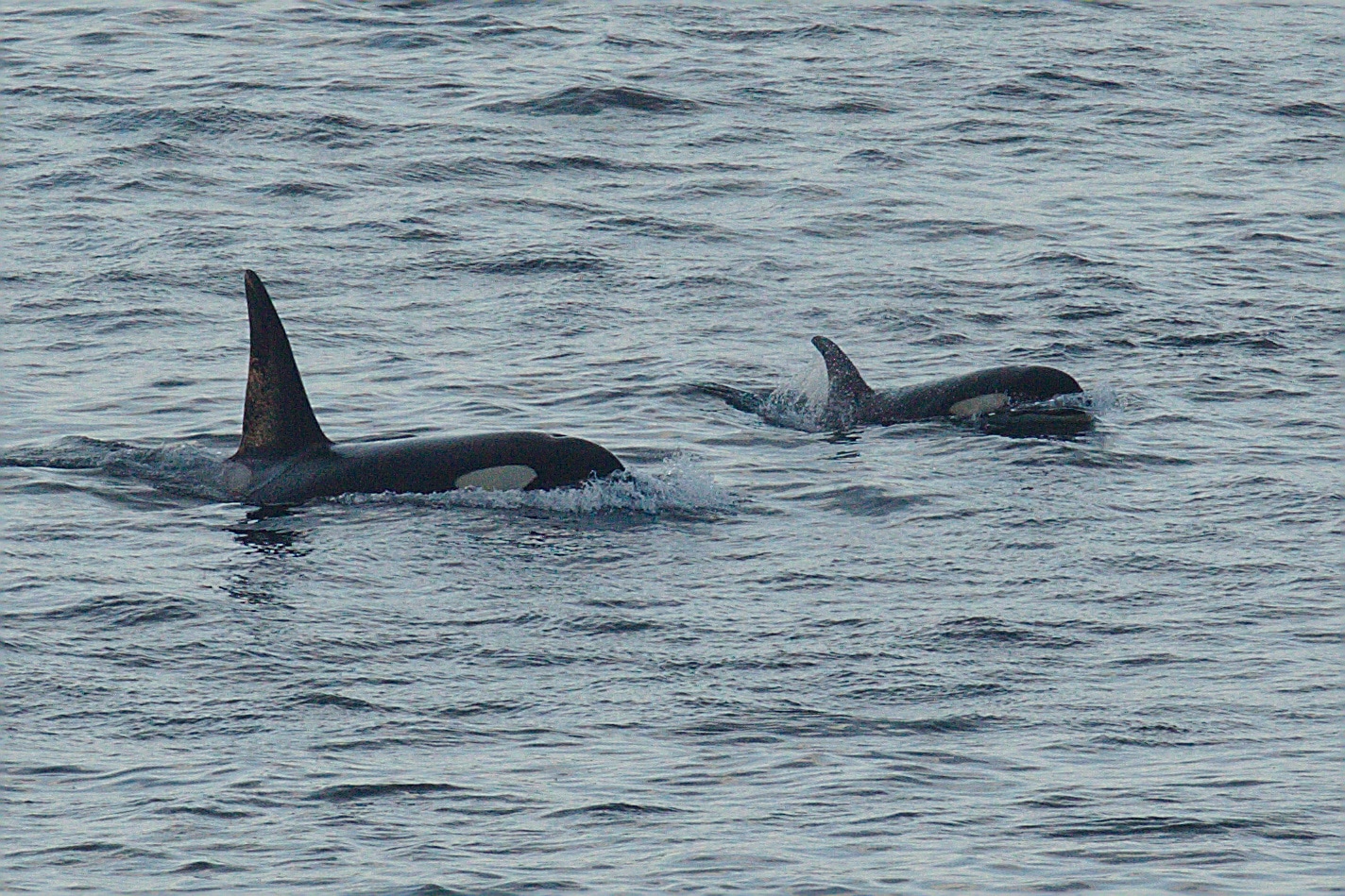 A huge shout out to Colin, Anna, Karen, Liz, Margaux, Katie, Harris, Charlie, Trish, Sam, Hannah, Suzie, Steffi, Phil, Peter and Rachell and to the sterling work of our Shorewatch Volunteers, Steve, Carol, David, Sue, Dave, Stacey, David, Avril, Paul, Adele, Cath, Janet, Katie B and Tibor and all the other eager orca spotters we met up on the cliff. Hope to see you again in 2017!

Posted in Blogs & Articles and tagged Orca, Scottish Dolphin Centre, shorewatch, Sightings
Preferences
We use cookies to help give you the best experience on our website and information about how you can support us.
Manage options Manage services Manage vendors Read more about these purposes
View preferences
{title} {title} {title}