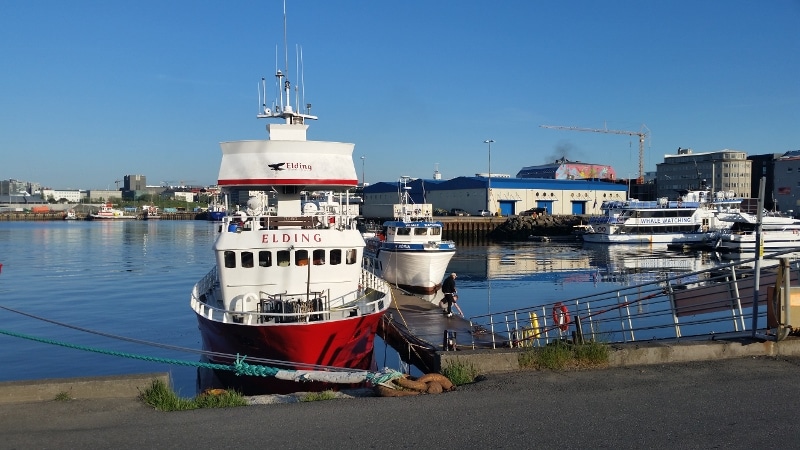 Following our event last Thursday at the Whales of Iceland exhibition in Reykjavik  during which speakers highlighted the importance of responsible whale watching and the creation of marine protected areas, it was a real pleasure to be invited to take a trip with two of the companies which received a prestigious Blue Flag award that evening : Elding, and Special Tours.

The Blue Flag is a voluntary eco-label generally associated in people’s minds with clean beaches – indeed, it has been awarded to almost four thousand beaches and marinas across the world – but these two companies (along with two others in Iceland: Ambassador and Whale Safari), have the distinction of being the very first whale watch operators in the world to meet the rigorous criteria required in order to receive this award, managed in Iceland by Landvernd, the Icelandic Environment Association.

Last Friday saw us take a trip aboard the Elding vessel and extracts from a diary entry by our guide, Alberto Alejandro, sum up an amazing late afternoon tour:

Flat seas, calm winds and a nearly-summer afternoon. We couldn’t have asked for better conditions to go whale watching. As soon as we left the harbour, we received a message that a humpback whale was spotted a little far away from the coast, so we prepared ourselves to go and check for it. But the seas had other plans for us, at least at the very beginning of our tour. About 30 minutes after our departure we spotted 10-12 white beaked dolphins. We approached them and we stayed a little, gazing those magnificent animals. They were so close that we had the opportunity to distinguish their amazing white and grey bands around their bodies!

We continued sailing towards the humpback, but we had to stop again as we detected the presence of 2 spectacular minke whales which were surfacing, again, really close to our boat. We continued our travel in search of the sneaky humpback. It took a while, but we didn’t care too much. The day was too beautiful for that so we just waited a little… waiting on a sunny day. And again, all of a sudden, we spotted at last the blow of the humpback whale in the horizon. We approached it really carefully, and we were really happy to realize that we were actually staring at Picasso, one of our most charismatic humpies! This whale gave us some awesome surfacings and very majestic blows. At the same time, another minke whale appeared in the same area. The trip was coming to its end when we spotted a breaching pod of white-beaked dolphins, far away from us. We went towards the pod, and saw 2 more minke whales surfacing, again, really close to our vessel. By the time we got to the dolphins, they had already stopped leaping, but we still managed to see 8-10 of them swimming really calmly at the surface. The sea was really alive this afternoon, and we were lucky enough to share this thrilling experience with our passengers!

The following day, saw us board the Special Tours vessel the Andrea, for another 5pm sailing with our guide, Lorentz, who recorded the highlights of our trip as follows:

On an emerald-green sea, we sailed out into the bay of Faxaflói, for the last trip of the day. The bay was a peaceful place. Few birds were out there. A few raindrops fell from the sky. We encountered many minke whales, some of which surfaced right in front of the boat. We even smelled their breath several times. Ughhhhh! Not the best smell in the world, but we survived. We also saw two pods of harbour porpoises on the way out. Later on, we found a small pod of white-beaked dolphins. This sighting was followed by a beautiful bigger pod of dolphins which swam along the boat for quite a while. We could see the animals below the water surface, swimming along. What a spectacle we had out there today. Whales and the Icelandic landscape: you go so well together!

Both trips ably demonstrated the great care taken by these ‘Blue Flag companies’ to avoid disturbing the whales and dolphins they encounter. Added value comes in the form of detailed commentaries on the species seen and the threats to their conservation. The minke whale is a case in point and I found it incredibly moving to watch these whales around our boat at a time when whalers were targeting potentially the same whales we had so much enjoyed watching, although sadly with harpoons rather than camera lens.

One in five visitors to Iceland takes a whale watch trip, and since 2010, the whale watch industry has been growing at an average annual rate of around 20%.  The irony is that minke whaling, a cruel and unprofitable industry, exists almost solely to cater for demand from tourists, since Icelanders themselves rarely consume whale meat. Already this season, 11 minke whales have been killed, highlighting the importance of educating tourists that the choices they make at dinner that evening can make the difference between the whalers continuing, or going under. And that can literally equate to life or death for these beautiful whales.

Iceland is one of my favourite places on Earth, its scenery is incredible, its people warm-hearted and creative.  I really encourage you to visit and support Iceland’s vibrant whale watch community and join them in celebrating the amazing whales in their waters. Just please don’t be tempted to sample the meat.

Support our campaign to celebrate Iceland as a Whale Nation, not a whaling nation