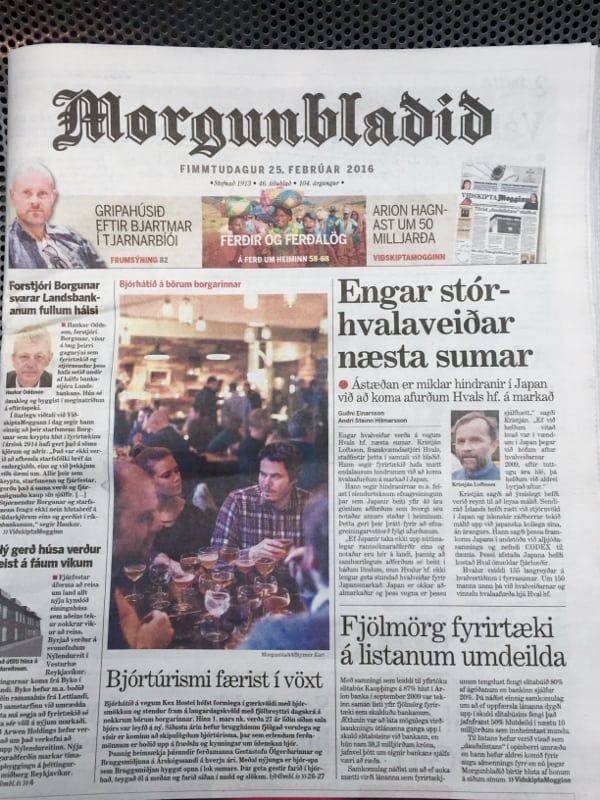 I couldn’t be more thrilled at today’s announcement by Icelandic fin whaler, Kristjan Loftsson, that he won’t be slaughtering fin whales off Iceland this summer at least.

Loftsson’s whaling company, Hvalur hf, has killed 706 fin whales since Iceland resumed commercial whaling in 2006, in defiance of a global ban on commercial whaling and despite the fin whale – the second largest animal on the planet – being listed as Endangered by the IUCN (the International Union for the Conservation of Nature).

But, hopefully, the slaughter is coming to an end. Loftsson cites problems exporting his meat to his only market, Japan, and also denounces Japanese whale meat analysis methods, claiming “If we had known what was in store in Japan, we would never have started again”.

In recent years, we’ve exposed the lengths Kristján Loftsson has gone to ship his whale meat – when protests by WDC and others made him persona non grata for his preferred route via EU ports such as Rotterdam and Hamburg, forcing him to cast around for alternative routes. In 2014, he shipped his meat the length of Canada by train, and only weeks later, in March that year, he sent a shipment of around 2,000 tonnes aboard the Alma snaking down the west coast of Africa and round the Cape of Good Hope Last June, increasingly desperate, he chartered the Winter Bay, which took a further 1,800 tonnes ‘over the top’ through Russia’s Northeast Passage, a route that can be treacherous.

We’ve also of course, exposed links between Hvalur and Icelandic seafood giant, HB Grandi, since Grandi profits have long propped up Loftsson’s ‘hobby whaling’ which has never been particularly profitable.

Last year, Hvalur killed a record 155 fin whales (exceeding Iceland’s self-appointed quota by one whale, based on a permitted ‘carry-over’’ from the 2014 hunt, which itself saw 137 fin whales slaughtered). So, based on Hvalur’s willingness last year to fully exploit their quota, we can say that at the very least, up to 154 fin whale lives will be saved this year.

But the million dollar question, of course, is whether Loftsson will be able to resume his whaling in 2017? Hvalur has, of course, stopped fin whaling twice in the past, once in 1989, resuming in 2006, and again in 2011 (due to market difficulties after the Japanese tsunami), only to resume in 2013 onwards.

There currently seem to be several impediments: Loftsson cites endless export difficulties and his dispute with Japan over their methods of analysing whale meat as the main reasons for his decision. He grumbles “if the Japanese do not take up modern research methods, as are used here, so that similar methods are used in both countries, then Hvalur can no longer continue whaling for the Japanese market. Japan is our major market, so therefore [whaling] would automatically come to an end.”

We know that at least one fin whale meat shipment was returned to Iceland in recent years after failing Japanese Ministry of Health testing (along with several shipments of Norwegian minke whale meat).  Norway and Iceland have certainly been pushing hard at a diplomatic level for Japan to change its testing methods and if Japan concedes, that would certainly remove one current obstacle to Loftsson resuming his activities.

However, there are others of course, not least declining interest and confidence in Icelandic fin whale meat amongst Japanese consumers.

Whale meat consumption is declining in Japan and whilst in the past, Japanese consumers may have expressed a preference for fin whale meat, in recent years, they have turned up their nose at Mr Loftsson’s imports, complaining of poor quality.

Sluggish demand has led to price cuts and fin whale meat being added to frozen stockpiles (or, until the practice was exposed by WDC and others, turned into dog treats).  Some reports suggest that as much as half the whale meat held in Japan is Icelandic.

Profit is another major variable of course, and increasing costs of transportation from Iceland to Japan via these ridiculously circuitous routes, coupled with price cuts and consumer disinterest within Japan, must be worrying for a canny businessman such as Loftsson.

Loftsson has consistently brave-faced the situation, insisting repeatedly that his whaling is economically viable, yet Hvalur’s financial statements show a loss of around 1 billion Krona in 2014 (roughly £5.36 million/$7.5 million USD).

And there’s almost certainly hidden agendas within Japan, not least that by cutting ties to Loftsson’s ‘controversial’ fin whale meat, Japan is hoping to increase its chances of convincing delegates at this year’s meeting of the IWC (International Whaling Commission) that they really do need their requested ‘small type coastal whaling’ quota now.

One thing is for sure, whilst we should welcome the news of no fin whale hunt off Iceland this summer – but we also need to remember that minke whales are still being killed in those waters, and to remain on our toes, as experience has taught us that it is unwise to second-guess Mr Loftsson’s next move.

Posted in Blogs & Articles and tagged Commercial whaling, fin whaling, Iceland, Whaling
Preferences
We use cookies to help give you the best experience on our website and information about how you can support us.
Manage options Manage services Manage vendors Read more about these purposes
View preferences
{title} {title} {title}