Who are the Southern Residents?

The Southern Resident orca community lives in the coastal waters of the Pacific Northwest. This iconic, beloved fish-eating population of orca is in trouble: they have become one of the most endangered marine mammals on the planet. Their range overlaps with mammal-eating Bigg’s orcas and the Northern Resident population, and although all orcas are still thought of as one species (Orcinus orca) the major differences between ecotypes makes orcas a “species complex,” consisting of many different population subsets with remarkable differences from each other. Southern Residents are genetically, acoustically, culturally, morphologically and ecologically distinct both within the Northwest and globally, and have been for at least 100,000 years.

These whales spend their lives with their families in social structures called matrilines, where a senior female, usually a mother or grandmother, acts as the family leader. Pods are made up of closely related matrilines that frequently associate. These social ties are highly stable; male Resident orcas stay with their mother as long as she is alive, and female offspring raising their own families stay close by.

Since 1974, an ongoing annual census has been monitoring the exact size of the Southern Resident population, made up of three pods: J, K and L. As they spend their summers in very urban water close to large human populations, it’s possible to count each individual every year, establishing family connections and social structure of the population. The current population totals 84 individuals, including eight new calves born in the last year. No precise count exists before 1974, but the National Marine Fisheries Service (NMFS) estimates the Southern Resident community may have had about 200 whales – more than twice today’s population number – and some scientists suggest even higher. In 2003, after a steep (20%) decline over 5 years, NMFS found the Southern Resident community to be depleted under the Marine Mammal Protection Act. In 2005 they earned a spot on the Endangered Species List, as a Distinct Population Segment. 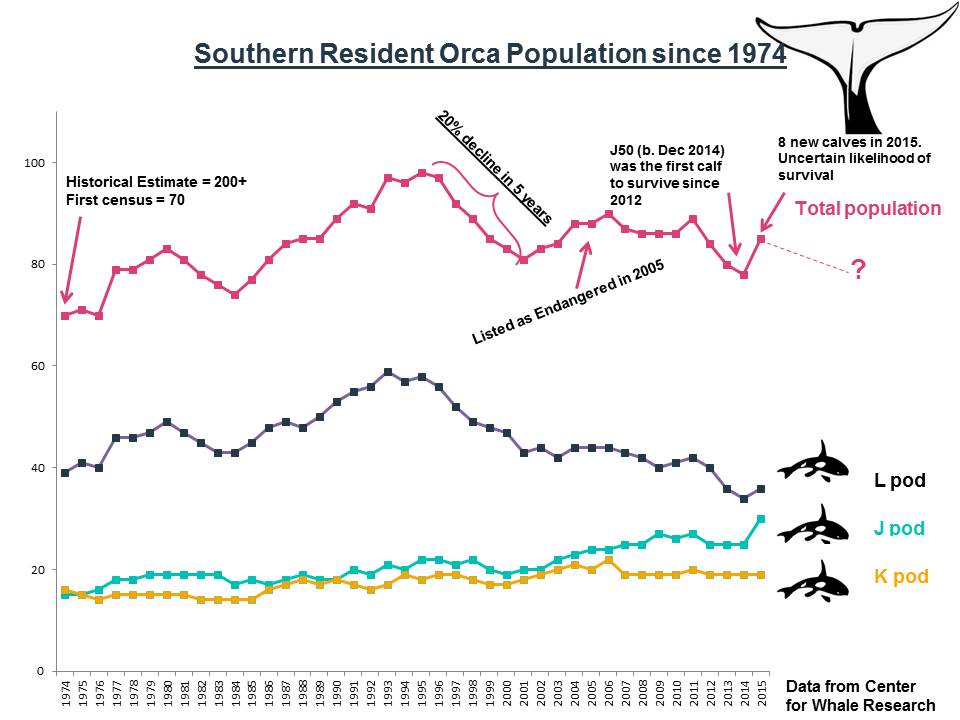 Although the Southern Residents have been listed as endangered for just over a decade, their current number is still fewer than when they were listed. Seven new calves in 2015 are a source of hope, but their likelihood of survival is not certain, and they will face many threats as they grow up. Since 1998, 43 whales have been born and survived while 61 have been lost. Their significant decrease is the result of many interacting factors. Over a third of the Southern Resident population was lost due to live-capture for marine parks before it was banned in Washington State waters in 1976. Chemical and noise pollution are serious concerns, but most significantly, salmon – their principle source of food – are now scarce.

In the following weeks, we will investigate in greater depth how each of these risk factors affect the Southern Residents, will explore what exactly critical habitat is, and why it is so important in a situation where they are dealing with many different kinds of human-caused threats.

NMFS chose this population as one of their eight “Species in the Spotlight: ” marine species (under US jurisdiction) that they consider to be most at risk of extinction in the near future. The point of making such a distinction was to draw more attention and resources to the recovery of these species, but so far NMFS has yet to take any additional actions to improve conditions for the Southern Residents. In fact, parts of the Southern Resident recovery plan have been eliminated or scaled back due to budget constraints, including analysis of samples collected during the last three years of winter distribution surveys – samples which could indicate the importance of salmon and Chinook to the whales when they’re on the coast.

Even with nine new calves in the population, without adequate protection and a plentiful food source, extinction is a likely outcome for this unique community. Time is running out for these whales, and no single solution alone will save them. Critical habitat is a useful leverage point to address many threats at once, but the current designation protects only a small part of their range, and expansion is necessary to truly have a meaningful effect.

We are asking that more of their range become critical habitat and that NMFS stop the unnecessary delays and make the Southern Residents a priority NOW. If you haven’t signed our letter of support, tap here to sign today. 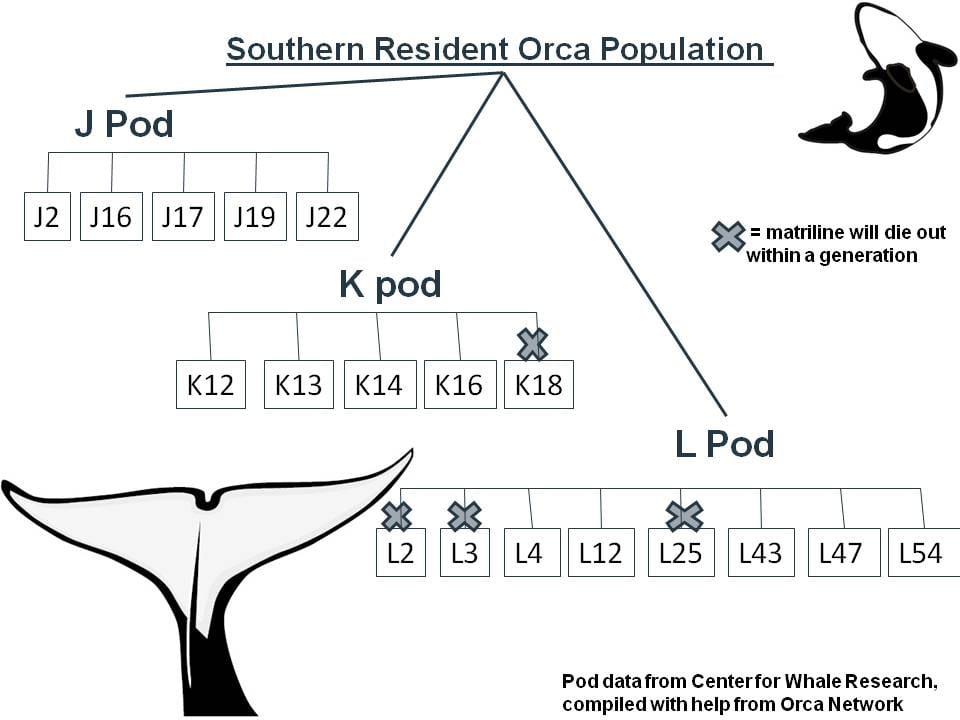