The brutal drive hunts that occur annually in the Japanese coastal town of Taiji have taken their toll this season. At least 365 dolphins of mixed species have been slaughtered in the killing cove, with 91 being selected alive from these hunts and sentenced to a lifetime in captivity, either in Japanese facilities, or shipped abroad to global swim-with-the-dolphins programs.

The most recent hunt, involving the round-up and slaughter of up to 45 striped dolphins, occurred on January 12th, just days after the death of music and fashion icon, David Bowie. With the world noting the passage of this London native, there are other reasons to set our sights on The City.

Although there have been protests targeting the Japanese Embassy in London in the past, usually to mark the commencement of the drive hunt season on September 1st, organizers of the upcoming London ‘Carnival Demo March’ are calling on all animal welfare and conservation organizations to join together with the public to march to the Japanese Embassy in a show of solidarity against these hunts on January 16th. This march follows a similar London demonstration that occurred on December 18th where thousands shared their voices against the hunts in front of the Japanese Embassy. London has become the epicenter and clarion call for the global movement to end these hunts. During 2015, several major protests took place in London specifically targeting the Japanese Embassy and seeking dolphin protection around Japan and the world.

There is no doubt that David Bowie’s song “Heroes” will be blaring and inspiring the masses as they march to the Embassy on Saturday, the 16th. Bowie’s anthem graced the final credits in the documentary, The Cove, and has since become a symbolic call for action and unity in the global movement against these hunts. Beyond his support of this film, Bowie was supportive of anti-whaling and other compassionate campaigns in the past, including through his participation in benefit concerts to support the ‘save the whales’ movement.

The event on Saturday will be the perfect opportunity to pay tribute to a wonderful musician and human being whose passing punctuates the continuing loss of dolphin lives to the brutal hunts in Taiji, Japan. Everyone has the opportunity to let their voices be heard, and display the power that each of us has, through collective action and as an individual, to change the world. As David Bowie’s lyrics suggest, “we can be heroes just for one day.”

The Carnival Demo March to the Japanese Embassy in London will start at 12:00 Noon at Cavendish Square, London. WDC supports these efforts, and encourages all to attend. More details can be found here 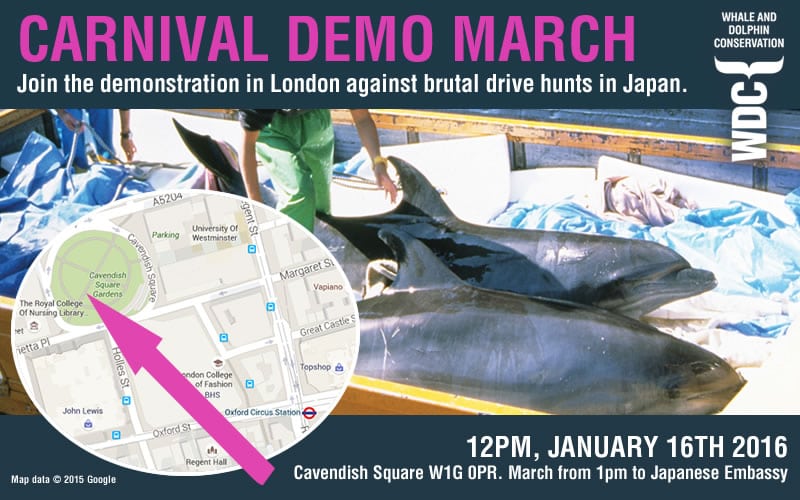