Whales migrating through the waters off California in the US maybe at risk from the unusual warming in the Pacific Ocean, which is causing them to change their feeding habits.

In 2015, more than 60 whales that have become entangled in fishing gear have been spotted along the coastline, up 400 percent on normal levels. It is thought that the warmer waters are encouraging the whales to come closer to shore as they follow their prey, putting them in danger from entanglement in gill nets, and lobster and crab lines. Crab fishermen in the region have already begun working with state and federal agencies and environmental groups to investigate further and hopefully work out a solution to the problem. 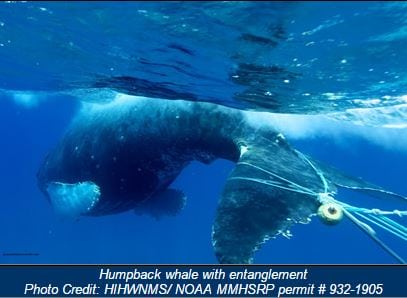 Posted in News and tagged Entanglement, Fishing
Preferences
We use cookies to help give you the best experience on our website and information about how you can support us.
Manage options Manage services Manage vendors Read more about these purposes
View preferences
{title} {title} {title}