Thanks to funding from Natural Resources Wales (NRW), we were able to go to Bardsey Island (Ynys Enlli) for two weeks in September this year to undertake our study into the Risso’s dolphin and harbour porpoise populations there. Our team of two (project leader Pine Eisfeld-Pierantonio and myself), were joined by NRW’s Senior Marine Mammal Ecologist, Tom Stringell, in the first week, and their Marine Mammal Specialist, Ceri Wyn Morris, in the second week.

In the first week the weather was a bit hit and miss; we would have spells of calm seas in the mornings that were soon whipped up into a frenzy by the wind, making it impossible for us to scan. We did have a number of Risso’s sightings, but due to the rough sea conditions we were unable to get out in the boat to take photo-ID shots of them, which was quite frustrating!

The second week the weather completely changed, from the cold windy and sometimes wet weather we had in our first week, we now had clear blue skies and lots of sunshine, almost like we had been transported to a tropical island! Finally we were able to get out on the boat with the Risso’s dolphins. 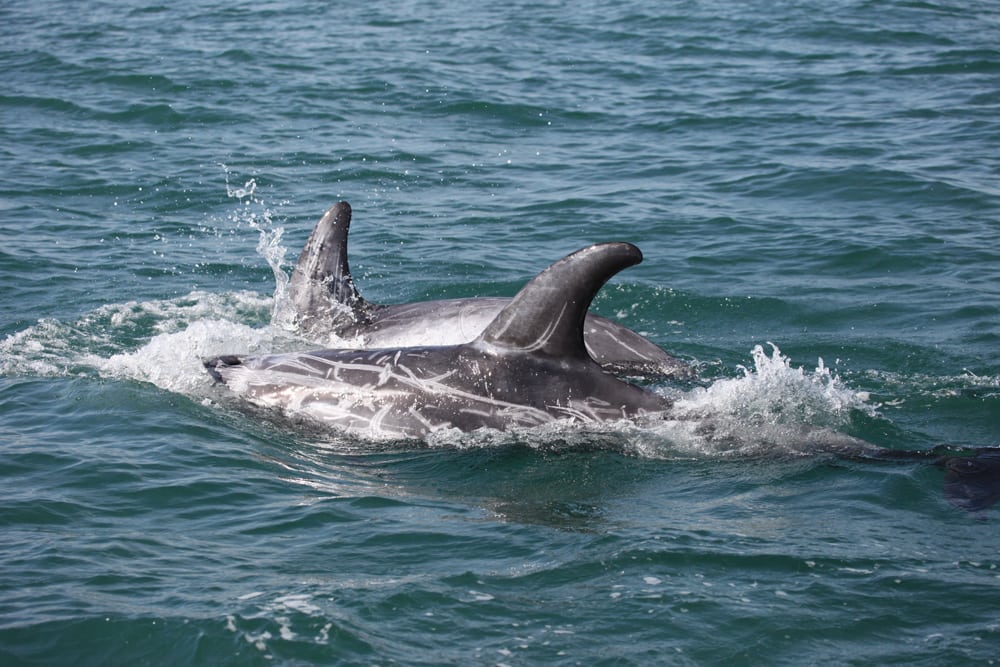 We picked up a group of animals as we scanned from the north end of the island, they were very slowly drifting south with the currents. We quickly picked up our kit and headed down to get on the boat as fast as we could to get out and find the dolphins.  It turned out we didn’t need to go far, they were waiting for us as we came out of the tiny harbour, and they were also really curious about us and came over to our boat to suss us out!

Risso’s dolphins don’t usually bow ride and although they can be quite active at the surface bow riding is not one of their usual behaviours. However this group decided not to be ‘normal’ and to our great delight, a number came over to our boat and bow rode as well as swimming alongside eye to eye with us and criss-crossing underneath the boat. One even rested on its side and made a squawking sound which was highly unusual to hear!

When we couldn’t scan for the flippered kind, we helped out with the study on the breeding grey seal population that give birth on the island each autumn. The study aims to find out if females use the same sites each year for pupping by taking ID photos of the mothers and their pups and mapping their location. This is a project we are quite happy to help out with as we get to sit and watch these beautiful white-coated seal pups with their dark liquid eyes, many of which love posing for the camera! During our down time we were also fortunate enough to enjoy the birds (like a little owl sitting in the gorse and a female redstart caught in mistnet), and watch the Bird Observatory staff as they ringed them. 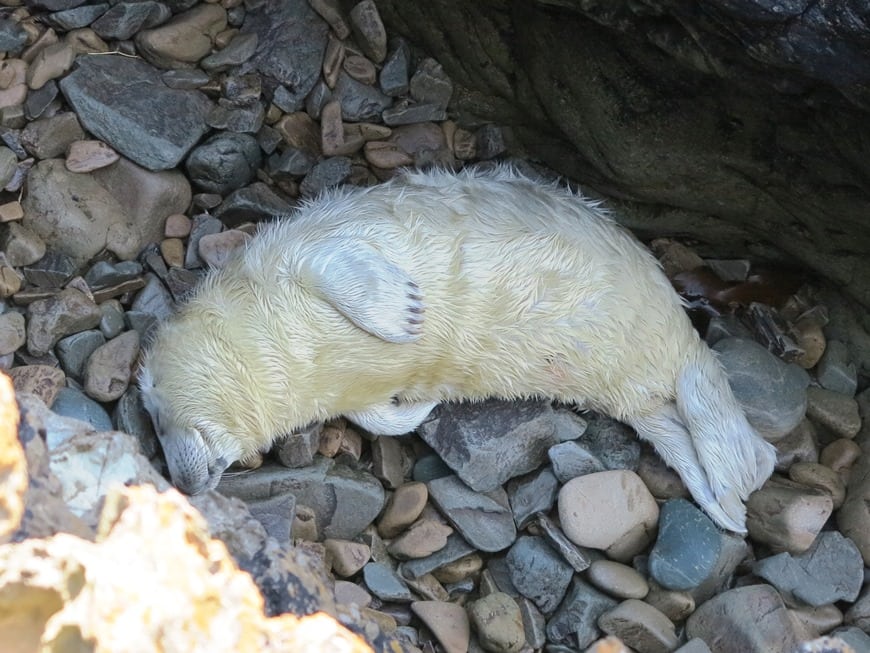 Again this magical island hasn’t disappointed us. We’ll be back! Watch this space!

Read all about our Bardsey Island fieldwork, and why we study Risso’s dolphins and harbour porpoises in particular.

Posted in Blogs & Articles and tagged Bardsey Island, Rissos dolphin, science
Preferences
We use cookies to help give you the best experience on our website and information about how you can support us.
Manage options Manage services Manage vendors Read more about these purposes
View preferences
{title} {title} {title}