Another update is provided from the ground in Taiji, Japan by Hans Peter Roth and Marna Olsen on behalf of WDC.

One should never get used to Blue Cove days. They will end eventually. Like yesterday. After eight consecutive days with no hunt in spite of relatively good hunting conditions, we had queasy feelings early on. Indeed, before 8am we spotted with our binoculars that two of the hunting boats had approached each other on the horizon. Soon other boats joined and eventually there was the whole drive formation of 12 boats in line, to drive dolphins closer and closer to shore. 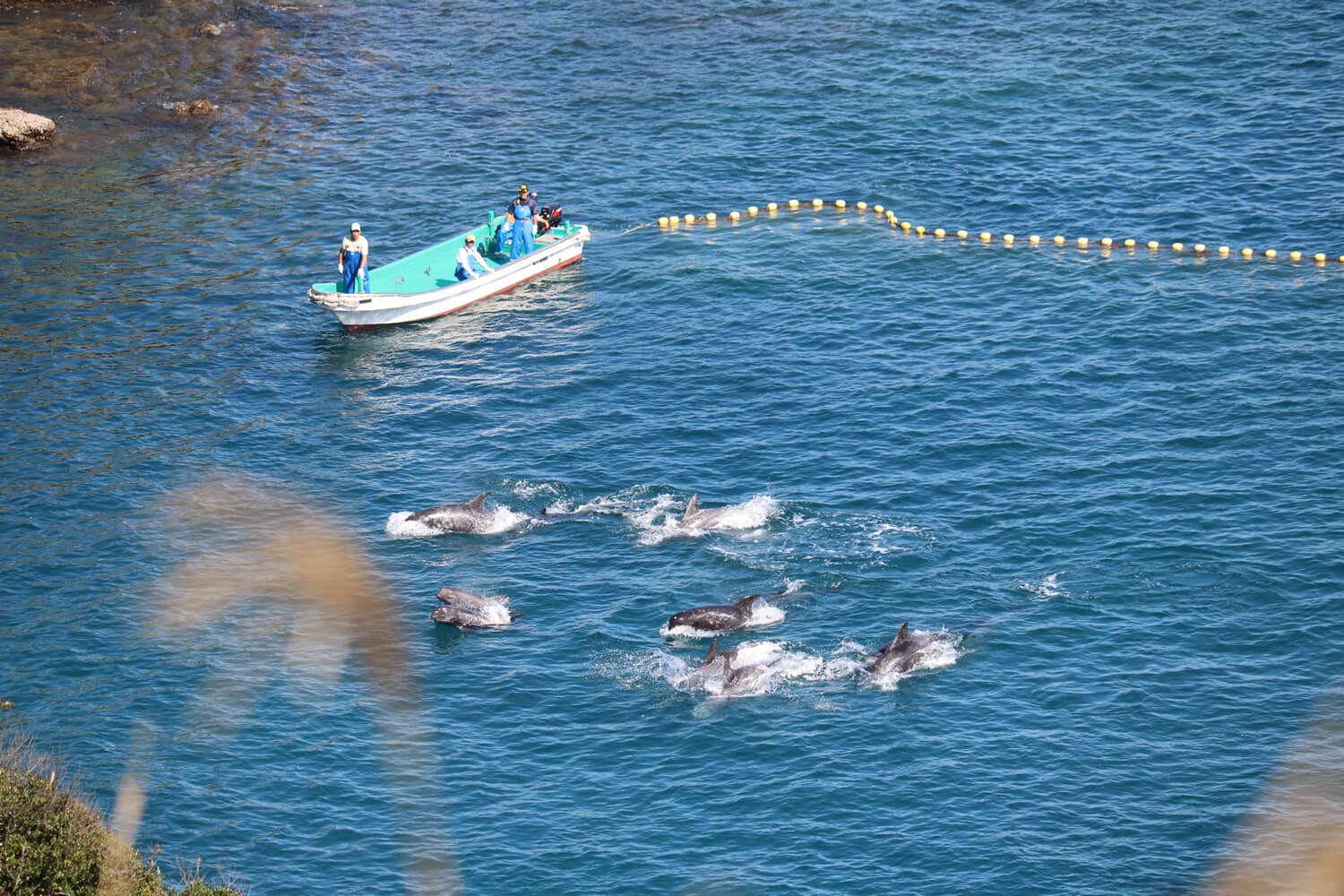 The drive is being performed with the boats aligning and men on each boat banging with a hammer on a massive metal pole held in the water, to create a massive wall of noise that scares the dolphins, which are highly acoustic animals, and cuts their communication. Trying to get away from the noise of the boats behind them, they flee closer and closer to land to eventually end up at the infamous cove of Taiji, where they are either selected for the captivity industry or brutally killed for their meat.

So as soon as we see a formation like that, we know what’s going on and our hearts sink. That can be a challenge, also dealing with each other as a cove monitor team, because one can start feeling tense, weary, sad, sensitive and more irritable. So when we were driving from the vantage point over to the hill right above the killing cove, we had to remind each other to stay in good team spirit, supporting each other. It worked and it has worked fine so far for us, in spite and also because of the horror we have to witness here.

When we got to the hill, close to 3 hours had passed since the drive hunt had started. The boats kept struggling back and forth with a mid-sized pod of dolphins about one nautical mile out. Then it suddenly went quickly. The dolphins were completely exhausted and stressed to the max. Sealed in the killing cove, this pod of about 20 Rissos’ dolphins, which was about to be wiped out, was driven closer and closer to the killing beach, hidden under tarps in a literal “cover-up”. A horrible sight once again, mothers trying to protect their calves.

In the process of trying to get away, some of the dolphins entangled themselves in nets, and some actually got over one net, but only to be trapped by a next row of netting. The hunters and killers got most of the dolphins out of the nets. But one they did not see. It drowned, entangled under the surface. A death which is as horrible for these sentient air breathing creatures, as it is for a human being. And unbearable to witness… At the same time we just try to function, doing our job, documenting, reporting and deal with emotions later. It does not always work well…

When the killing was over, skiffs pulled the dead dolphins over to Taiji harbor, covered under tarps, but sometimes becoming visible. Would the hunters once again dump a drowned dolphin at sea and it might be washed ashore, as we had found a carcass on the beach after the last hunt? They did take six dolphins out to be dumped at sea; but these were alive. So we count a kill of 13, with one dolphin drowned and six released at sea, less than two nautical miles out. With our binoculars we could see them swim away. 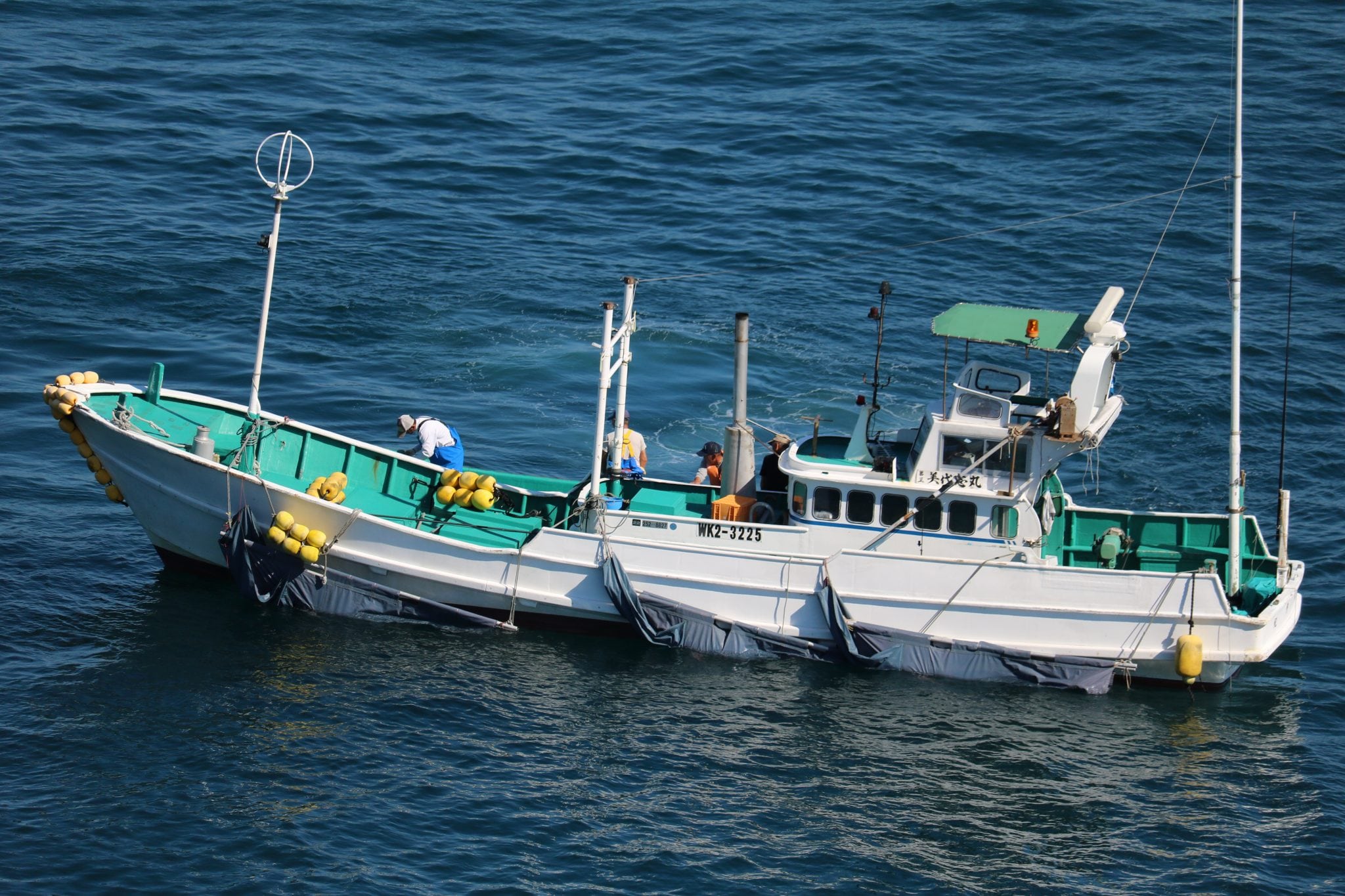 We walked away quietly, heads hanging. It is hard to describe the helplessness you feel when you are so close to these animals you want to protect and rescue, and see them die in a horribly painful way after a very long and exhausting drive hunt of almost four hours. It’s hard not to get in the water, between the killers and the animals; but that would not save one of them. Then comes the time to digest, time for emotions. It is on these Red Cove days, when good team spirit and mutual support is needed most.