Researchers at OrcaLab on Hanson Island, located at the northern end of Vancouver Island, have received a rare visit from the Southern Resident orcas. A write-up of the encounter from Helena Symonds of OrcaLab:

Last night visitors at OrcaLab heard and identified Southern Residents in Johnstone Strait. They had been seen earlier in the afternoon near Ripple Point making their way north. Then this afternoon, Jared, a local DFO researcher, called to say the Southern Residents were off Donegal Head. Very soon after we heard calls! But the calls were Northern Resident G clan calls, specifically I31/I11 type calls!!! We told our Jared. He said “seriously?” because he was looking at Southern Residents clustered together behind a tug heading into Blackfish Sound.

We could hear the Southerns but the G clan calls sounded closer. Jared then reported that there was a group close to Flower Island. Was this the G clan group? They then came into view. Jared followed this group in and identified them as a mix of I31s and I11s. (Northern G clan orcas) As he followed this group he watched the Southern Residents move close to Burnt Point on the Hanson Island side and soon they were in our view. There were a lot of Southern Residents!!!!

The Northerns chose to stay on the far shore almost parallel to the Southerns who moved to mid channel. The vocals dropped off. The groups progressed through the Pass and out of view. Whew! So beautiful! So unusual, once in a lifetime! But it was not all yet over. We had seen another group over on the far shore and eventually this group made their way into Blackney Pass well after the others. It turned out to be the A34s with A46!. There was just enough light to see them and Jared came back to do a quick confirmation before heading home. Southern and Northern residents are not known to mix and this was a close encounter. So amazing, we are all blown away and thankful too. 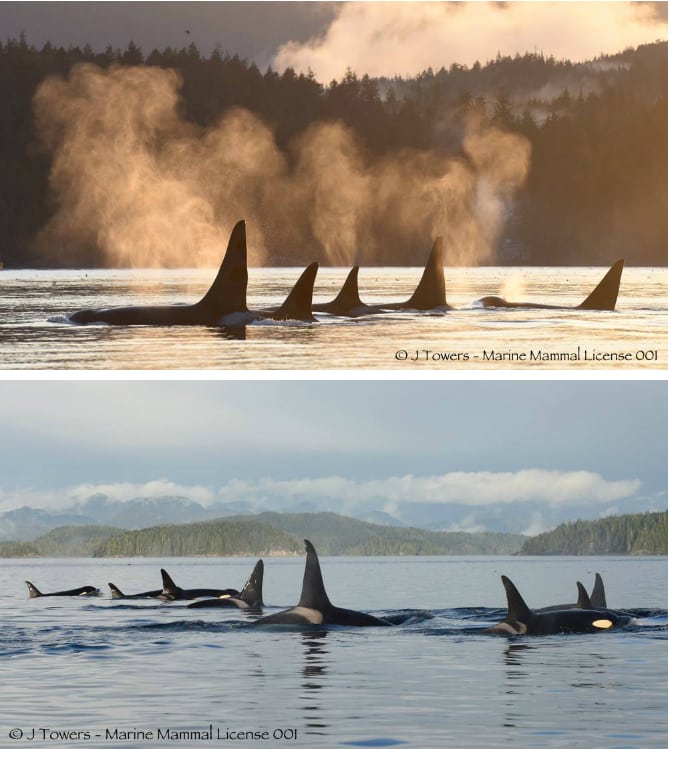 Posted in Blogs & Articles and tagged science, Southern Residents
Preferences
We use cookies to help give you the best experience on our website and information about how you can support us.
Manage options Manage services Manage vendors Read more about these purposes
View preferences
{title} {title} {title}