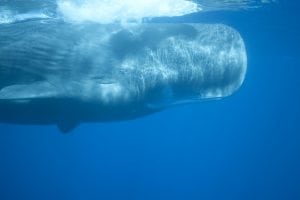 A lot of people are intrigued by the current story of a dog walker discovering a lump of ambergris washed up on a beach on Anglesey, North Wales. We’ve been asked several times whether it is legal to remove this product from the beach and sell it. The answer, perhaps surprisingly, is yes (at least in many countries, including the UK and the rest of the EU) and here’s why.>

Ambergris is only produced by the sperm whale or pygmy sperm whale. Sperm whales are the largest of the toothed whales and primarily feed upon squid. The average sperm whale will consume around a ton of squid a day, equating to several thousand squid beaks and other debris which, after a while, start to build up in the sperm whale’s four stomach chambers. As a rule, sperm whales will regularly vomit this mass of sharp and indigestible squid remains; however, very occasionally, these pass further into the whale’s digestive system and this sets the scene for ambergris to be formed.  A world expert on ambergris, whale scientist, Dr Robert Clarke has described the several-year process of creating a lump of ambergris deep within the intestines of the whale.

As the tangled mass of squid beaks passes through the intestines en route to the rectum, it becomes saturated with faeces. This mass of squid remains and faeces bind together in the whale’s rectum, which itself is teeming with bacteria. Under these conditions, the mass grows ever larger and, over a period of years, forms a ‘boulder’ which increasingly obstructs the whale’s rectum. Sometimes the whale is able to excrete the mass and survive, but in other cases – maybe because the lump of ambergris has grown too large to be accommodated in the whale’s gut – the unfortunate whale suffers a fatal rupture. Either way, the ambergris is ejected into the ocean, where it may float at the mercy of currents for long periods of time before eventually washing ashore.

It is clear, then, that ambergris only develops in rare and specific circumstances. Indeed, scientists estimate that ambergris is found in the intestine of only 1-5% of sperm whales or pygmy sperm whales and, despite current media headlines, it is more accurately described as ‘whale poo’ rather than ‘whale sick’! Once excreted, the ambergris may float in the ocean for many years, becoming more solid over time, before eventually being washed ashore.

Ambergris takes many forms, but is most often an egg-shaped or round lump which can weigh many kilograms: the largest-recorded ambergris ‘boulder’ to date was retrieved off Australia in 1913 and weighed 455 kgs!  By contrast, the lump found recently on Anglesey weighs just over a kilogram. Its colour varies from black, to shades of brown, gold-brown and even grey and tends to lighten over time. Similarly, the smell of a lump of ambergris is more pungent when newly-excreted and again, tends to mellow over time. It has an odour variously described as reminiscent of farmyard manure or the smell of seaweed – certainly many people find it objectionable, yet others claim it’s quite pleasant!

What is it used for and is it valuable?

Ambergris is traditionally used as a fixative in the perfume industry, highly prized due to its ability to ‘fix’ a scent on human skin. Despite the existence of synthetic alternatives, it remains sought after by perfumiers. For this reason and due to its rarity in the natural world (remember that it is produced by less than 5% of sperm whales), it is regarded as highly valuable and thus has earned the nickname ‘floating gold’.

In recent years, ambergris salvaged after being washed up on beaches has fetched high prices and the lump found on Anglesey is estimated to be worth around £7,000.

Have sperm whales ever been killed specifically for their ambergris?

In the past, sperm whales were primarily killed for their oil but even the chance of discovering ambergris was a motivating factor. Just think of Moby Dick: a whaler could make a fortune from selling the ambergris obtained from a single sperm whale as it was so much in demand by the perfume trade. Today, the subsistence hunt of sperm whales off Lamalera, Indonesia, is possibly the only example of sperm whales killed, at least in part, because of the chance of finding ambergris.

Is it legal to possess or sell ambergris nowadays?

Yes and no. In most countries, including the UK and the rest of the EU, it is currently perfectly legal to salvage a lump of ambergris from beaches and sell it, either at auction or on sites such as eBay.  All whale and dolphin species are strictly protected under EU law and international trade in whale products is banned. However, ambergris is treated differently, since CITES  (the Convention on International Trade in Endangered Species) regards the substance as an excretion, like urine or faeces, and therefore, as a benign byproduct and hence not requiring to be covered under the Convention. The EU is currently happy to support this definition.

The situation is very different in the US and Australia, where possession of, or trade in, ambergris is banned.

In the US, sperm whales are protected under the Endangered Species Act of 1973, which prohibits the use of any product from an endangered species. However, ambergris is regarded as a bit of a ‘grey area’, being a waste product and thus capable of being ‘salvaged’ without needing to harm whales.

In Australia, ambergris is considered to be a whale product and therefore, its export and import is regulated under part 13A of the Environment Protection and Biodiversity Conservation Act, 1999.

However, there is a bigger issue of course: trade in whale products or byproducts of any kind perpetuates the notion of whales as a commodity, with their parts to be consumed or used in some way by humans.