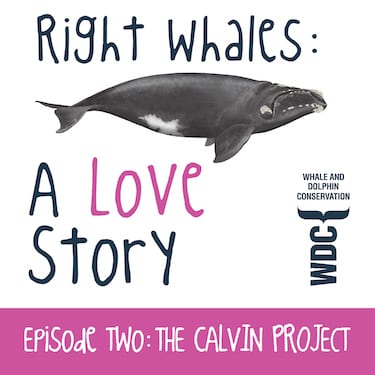 Calvin is not an acronym, Calvin is the name of a female North Atlantic right whale that was born in 1992.  Five of my 2003-4 students were born in that same year.  As seventh and eighth graders they were curious, energetic and idealistic.  They wanted to do something to help things get better in the world.  The students formed a club, called the Maineacs, that worked on helping animal shelters.  Also in 2003 I was reconnecting with the New England Aquarium’s Right Whale Research Field Team in Lubec, Maine.  I had volunteered for the Team in the 1980’s and now I had time again to volunteer.  After spending the month of August with the Team I came back to school with a renewed sense of purpose; to help the endangered right whales that few people seemed to know about.  I asked the Maineacs if they would like to help me educate the public about the endangered North American right Whale and The CALVIN Project was born.  But the name of the Project took a bit longer.

In order to educate others about an endangered species, the educators (the students) had to learn about the right whales, their environment and the threats to their survival.  Since the students made up most of my seventh and eighth grade class I decided to teach the aspects of science we normally study using right whales as an example.  I devoted one science period a week to connecting right whale anatomy, physiology, and environmental aspects to our regular studies.  From respiration to hormones to habitat degradation, the right whales were the right example for us to use.  In addition the students attended the Annual Right Whale Consortium Meetings where scientists discussed their latest research and the students got into the field and saw real live right whales in the Bay of Fundy.  It is unusual for middle school students to attend a full-blown science conference let alone get to see an endangered species up close.  But, they did all of that and more.

Once the students learned a bit about right whales and their problems, the next phase of producing a product that could educate others began.  The students decided to produce a PowerPoint Presentation.  The presentation included right whale anatomy and physiology, their habitats and their main threats; shipstrikes and entanglements.  At this point each student took a different part to research and produce a few slides.  I arranged for each student to have a scientist mentor from the Right Whale Consortium to correspond with so that the Presentation would be accurate.  Finally each student’s slides were woven together into and informational PowerPoint.  The theme of the PowerPoint was Calvin, the right whale’s life so far.  Early in the research the students found out that in 1992 a baby right whale was orphaned in the Bay of Fundy because her mother was hit by a ship and killed.  The scientists at the time called the baby Calvin because she was a feisty little one and managed to survive without her mother.  Calvin was entangled in the late nineties but managed to get free with help from a disentanglement team.  Calvin also gave birth to her first calf in 2004.  Her life story (the life that began the same year the students’ lives did) would be the thread to hold the story of all right whales together.  The students even had a four-page print out of all the times Calvin had been sighted by scientists.

With a powerful PowerPoint in hand the students then began to present it.  Each student spoke about the slides she/he had produced.  The audiences ranged from other classes at their school to the local Watershed Association, from area schools to a Coast Guard class.  They were spreading the word.  The goal of the students was to educate people about right whales and they have succeeded every year from 2005 to the present.  Since 2005 the various generations of Calvineers have presented to schools from Quebec to Tampa including New York City and Boston.  They have presented at the Consortium Meetings and at the 17th Biennial Biology of Marine Mammal Conference in 2009 where 1800 scientists were brought to tears and inspired by their work. Today there are five Calvineers. They are the sixth generation of Calvineers.  They are working on the fourth revision of the PowerPoint and speaking out. Catch them at the Right Whale Festival on May 3rd at the New England Aquarium.

There is a formula here for service learning:

The first generation of Calvineers is out of college now.  One became an engineer partly inspired by her time in The Calvin Project.  Many other former Calvineers have taken to the sciences.   The list of studies includes cellular biology, psychology, genetics, marine mammals, environmental studies, cancer research and nursing.  In addition to spreading the word, perhaps the best thing about projects like this is helping young people find their passions.

BILL MCWEENY grew up on the Squantum peninsula in Boston Harbor during the 1950’s and 1960’s.  He was always doing something near the ocean; sailing, swimming, fishing, clamming, water skiing, and exploring the intertidal zone.  As a teen he made artificial tide pools from plywood boxes so that he could investigate the marine life present in Quincy Bay.  At North Quincy High School Bill entered his science fair project about the marine wood-boring Crustacean, Limnoria, in multiple fairs over three years, winning numerous awards at regional and state fairs.  In 1966 he won first place at the North Quincy High School Science Fair, which continues to this day.  Bill received a BS degree in Biology from Northeastern University where he spent the last two years of his studies at Northeastern’s Nahant Marine Laboratory.  Bill tried teaching science and fell in love with the work.  After more than a decade into teaching Bill volunteered for the New England Aquarium’s Right Whale Research Team doing fieldwork in Lubec, Maine in the summers.  Bill thinks all science teachers should work with a research group because doing so inspires a higher level of teaching.  After 29 years of teaching in Quincy Bill moved on to the Adams School in Castine, Maine.  In 2003 Bill started a school club called The CALVIN Project, dedicated to saving the North Atlantic right whale.  His students, the Calvineers, have educated hundreds of people about the plight of the North Atlantic right whale.  Bill is still teaching middle school science after 45 years and has no plans to retire.