This exploration of orca ecotypes is a guest post from our friends and colleagues Paul Spong and Helena Symonds at OrcaLab.

They say, “You are what you eat”.  Nothing could be truer for orcas.  The choice of and the availability of specific foods define the different ecotypes of orcas found throughout the world’s oceans.  Three such ecotypes inhabit the waters the Pacific Ocean’s north-eastern continental shelf: Resident, Transient and the lesser known Offshore groups. These three distinctive populations are not known to interact with each other even though their geographical ranges overlap.

Resident orcas eat fish, primarily salmon and preferably the Chinook species.  Chinook are the largest of the six species of salmon.  They have a high fat content, and though less abundant than the other species of salmon, they can be found throughout the year. The summer migration or “run” back to their natal rivers is more prevalent than in winter.  Hence, the presence of resident orcas along the coast is more pronounced during the summer and fall months as the orcas follow the fish. Typically, Resident family groups begin to congregate in specific areas from June through October and November to prey on these migrations.  Johnstone Strait-Blackfish Sound has been designated Critical Habitat in recognition of high Northern Resident orca use, especially during summer and fall.  Chum salmon, the next largest of the six salmon species, are also important to the Resident orca diet.  The Chum “runs” occur late summer and fall. The diet of Resident orcas can also include halibut, cod, sole and squid.

Highly social, Resident orcas stay within their natal group or matriline throughout their lifetime, even the adult sons.  A matriline usually consists of a mother and her offspring.  Daughters with their own offspring are still considered part of their mother’s group until sometime after the mother’s death, when recognition may be given to the daughter.  Resident orcas are by nature quite vocal.  Their vocal traditions are passed from the mother and so contribute to the strong identity and bonds between family members.  The degree of relatedness between groups is determined by the number and similarity of shared discrete call types.  Groups that have a high number of similar calls are known as pods. Pods which share at least one similar call are called a clan. 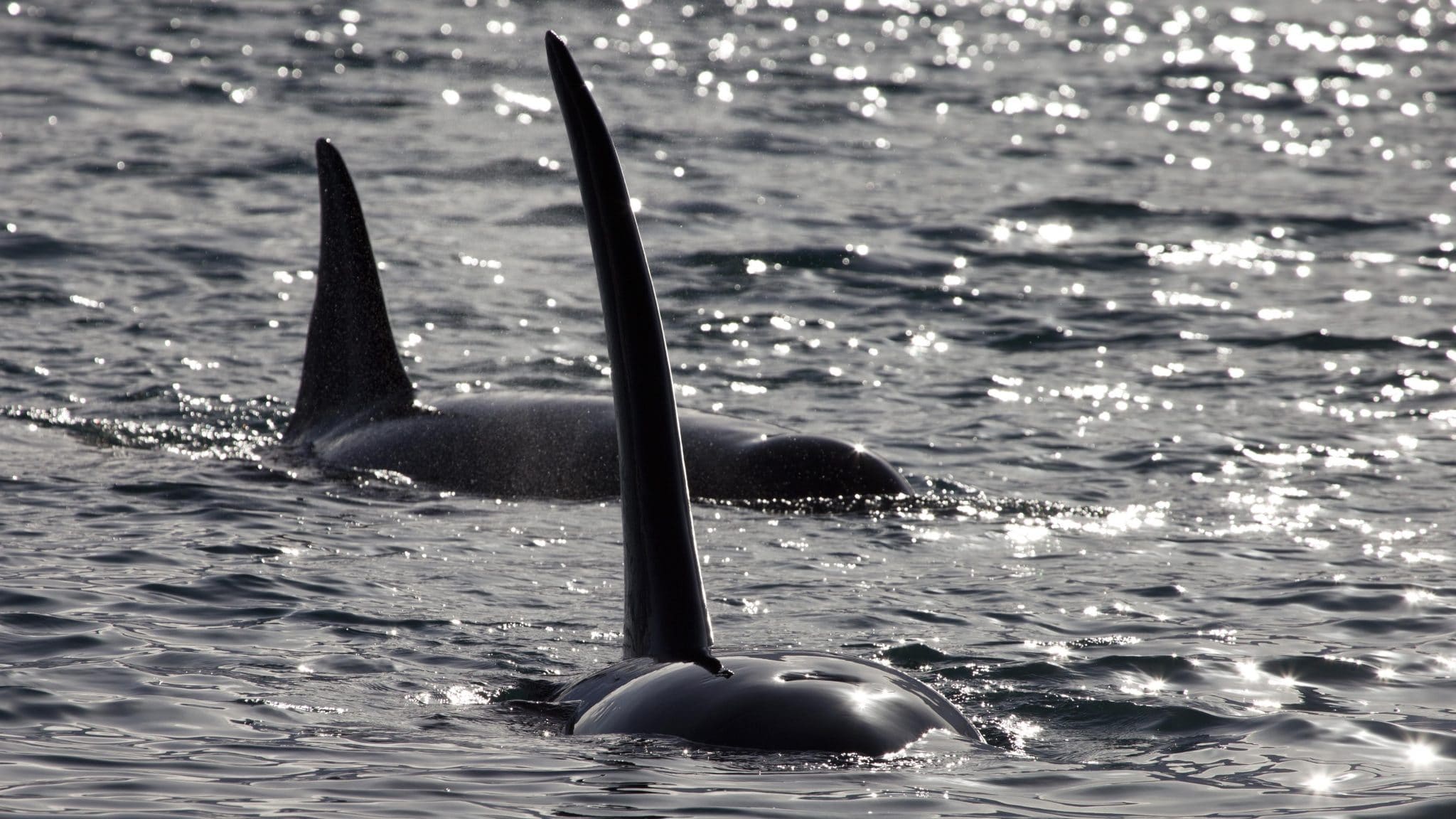 Transients, now referred to as Bigg’s orcas are believed to have separated from other the orca lineages some 700,000 years ago.  Basically, they have few physiological differences from other orcas.  However, they tend to be slightly larger on average than Resident orcas and their dorsal fin is generally less rounded as well. These differences along with their behaviours and diet distinguish them as a distinctive ecotype. They tend to travel in smaller groups, spend less time socializing with each other and often disperse from their natal group.  As a result group composition may be quite fluid.  Unlike Residents, all Bigg’s orcas basically share the same call tradition (the same set of call types) though some regional differences do occur.   Even though challenging to spot and track because of usually travelling in smaller numbers, of taking longer dives (some up to ten minutes) and of maintaining silence while travelling and hunting, they are found on the coast year round. They hunt cooperatively mainly for harbour seals (the majority of their diet), porpoise, dolphins, sea lions and occasionally minke whales.  Because their prey all have good hearing, it is thought that Bigg’s orcas are purposely silent most of the time so as not to alert any intended prey to their presence.  Vocalising usually commences during and at the end of a successful hunt.  Hunts are sometimes well rehearsed affairs that may take several hours to complete depending on the size of the prey and include such tactics as coordinated charging, drowning, jumping on top and striking.

The third ecotype found along the northeastern Pacific coast are the less studied Offshore orcas. Indications that they even existed only occurred in the late 1980s.  At the time, they were thought to be restricted to waters on the western edge of the Continental shelf from California to the Aleutian Islands, Alaska. But in 1993, they made their first foray into the Johnstone Strait/Blackfish Sound area and since then there have been about 30 more encounters.  Like all orcas, Offshore orcas are highly social. They travel in large groups, sometimes as many as fifty individuals. Like Residents, Offshores are very vocal.  Work is currently underway to determine if group specific vocal traditions exist, and this is probably the case.  Offshore orcas are also fish eaters. However their preference is thought to be for sharks, such as the Pacific Sleeper Shark.  They have also preyed on dogfish & other sharks, Halibut, Chinook salmon & some other fish.  Unlike Resident and Transient orcas, many Offshore teeth are noticeably worn regardless of age. Opinion is that their habit of eating sharks with their sandpaper like skin has caused this condition. Offshore orcas are slightly smaller than either of their Resident and Bigg’s counterparts.

Posted in Blogs & Articles and tagged adopt an orca, Orca
Preferences
We use cookies to help give you the best experience on our website and information about how you can support us.
Manage options Manage services Manage vendors Read more about these purposes
View preferences
{title} {title} {title}