I’m delighted to report that Breach, a documentary on Icelandic whaling made by independent LA-based film-maker, Jonny Zwick, will receive its world premiere at the Santa Barbara International Film Festival in California, which opens today and runs to February 7th. The film is being shown twice: on Wednesday 28th and Saturday 31st January. 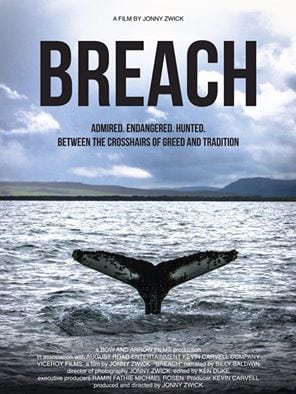 Jonny’s film juxtaposes images of the starkly-beautiful Icelandic landscape and rich natural history with jarring images of the slaughter of fin and minke whales.  He allows a whole range of people – from whalers to whale watchers; government scientists to conservationists, as well as ordinary Icelandic citizens – to voice their opinions via voiceovers and ‘talking head’ interviews and in so doing, allows both sides to expose the blinding contradictions inherent in Icelandic whaling.

As he puts it “My film focusses on the spectacular ironies, contradictions and unethical decisions surrounding the attempts made by the whaling industry and the Icelandic government to convince people that there is still a market for this meat….but I would like to point out how kind Icelandic people are as a whole. Please don’t hold the entire population accountable for the decisions made by a small number of influential businessmen and politicians. Icelanders are some of the most warm-hearted and welcoming people I’ve ever met.”

WDC congratulates Jonny for his vision and determination to see this project to fruition. My sincere hope is that this film will resonate and spark debate amongst people in Iceland as more and more people reach the conclusion that whaling has indeed had its day.

Posted in Blogs & Articles and tagged fin whaling, Iceland
Preferences
We use cookies to help give you the best experience on our website and information about how you can support us.
Manage options Manage services Manage vendors Read more about these purposes
View preferences
{title} {title} {title}